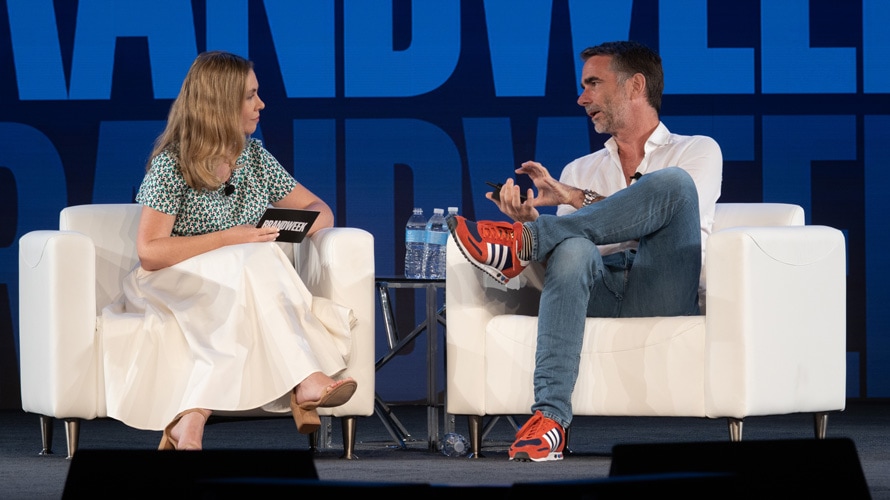 Lufthansa's vp of marketing Alexander Schlaubitz discusses how the airline is forging emotional connections with customers at Brandweek. - Credit by Sean T. Smith for Adweek

PALM SPRINGS, Calif.—Much of the marketing and advertising in the travel industry is aspirational: feet in the sand, chilled daiquiris and nary a worry.

At least, that’s the idea—but in the real world, even before customers arrive on a beach, one lost suitcase can derail an entire trip. It’s stories like that which made Alexander Schlaubitz, Lufthansa’s vice president of marketing, recalibrate his team’s approach.

“It’s one of the most complex businesses I’ve ever been in,” Schlaubitz said of the aviation industry at Adweek’s annual Brandweek summit.

Adweek
So, Schlaubitz and his team posed themselves a question: How can we make empathy something that becomes the heart of the brand and transcends the market?

Their search for an answer began at airports. They created an out-of-home campaign, placing printers in kiosks near arrival gates, allowing friends and family members picking up their loved ones a chance to create and print out a personal message for their arrivals.

“We ran out of paper three times a day,” Schlaubitz said.

Another kiosk containing tissues was placed near points in airports where travelers say goodbye.

While creative, empathetic advertising isn’t exactly a measurable difference whose return on investment can be tracked, Schlaubitz admitted.

“We all understand that increasing the joy-of-use of the brand has a positive impact on business, but it’s not something you can calculate as a concrete monetization within six months,” he said. “You have to sit it out, and you have to believe in it.”

Like the airport kiosks, Lufthansa’s ongoing partnership with IBM Watson Advertising, which started in 2018, has focused on engaging and conversing with consumers and placed less of an emphasis on conversions and ticket sales.

The AI-led campaign targeted users visiting the IBM-owned Weather Channel website. After being given a call to action, such as being posed questions like “Where in the world would you pause time?” or “Is somewhere else always the right place?” Users then engaged in a conversation with Watson, which could answer questions as specific as Lufthansa’s baggage allowance or offer suggestions of cities to visit.

After users completed the questions, they were redirected to Lufthansa’s booking site, where they would see an offer relevant to their interests. Users spent on average of 40 seconds within the IBM Watson ad per session, and Lufthansa hopes to use the data and insights for future campaigns.

“This is part of our budget that’s dedicated to learning, and learning only,” he said. “We’re getting so much more anecdotal evidence about what is important—it’s like having a focus group at scale, and they’re intrinsically incentivized.”