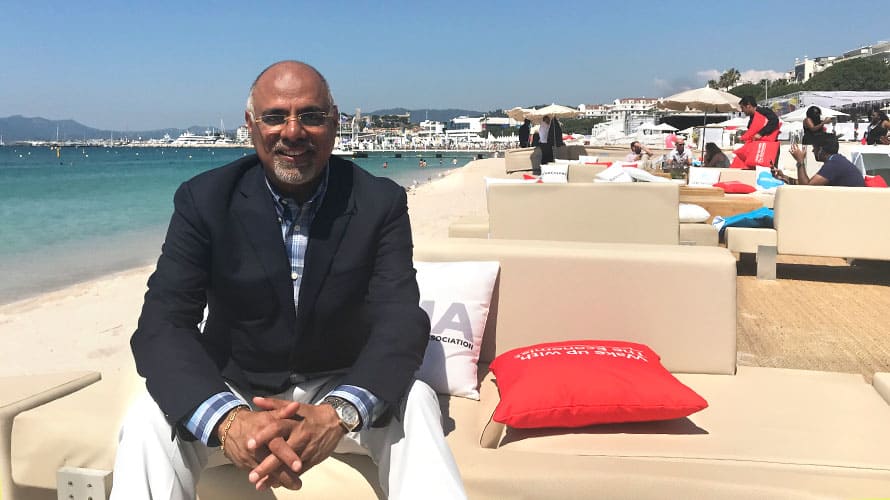 CANNES, France—One snafu shouldn’t deter marketers from pursuing brand purpose, according to Mastercard CMO Raja Rajamannar. He should know: The company had to retool a recent World Cup campaign. Adweek caught up with Rajamannar to learn more about that campaign, what Mastercard has learned from the mistake and what Rajamannar thinks of influencer fraud.

What did you think about Keith Weed’s comments about influencers? Is Mastercard also going to rein in that area?
Rajamannar: Frauds come in many types. If you have bot traffic, that’s a fraud. If you’re having fake sites, that’s a fraud. Having fake influencers is one more kind of fraud. Whichever kind of fraud [it is] you need to tackle it, mitigate it and eliminate it.

A lot of people are deploying influencers as part of their core strategy. When the priority shifts behind influencers, money moves behind that and where there’s money the fraudsters try to gravitate. Therefore, the fraudsters try to take advantage of the situation. So there’s a phenomenon. We need to nip it. At least, mitigate significantly, but I don’t know if you can completely eliminate or not.

Do you think the push for ‘brand purpose’ is a fad?
The generations of tomorrow don’t merely want brands to sell their wares or to merely throw ads at them. More than 80 percent of all millennials say they want brands to stand for something that they believe in. Standing for something they believe in means doing something about it. Not just ads—but taking action. This is something millennials are demanding. If you don’t do it they are very happy to move away from you. They want purpose-led brands so it is a business necessity, not a fad.

Are there other business implications?
From a talent perspective, when you’re attracting the younger talent particularly, they are amazingly purpose-driven. They don’t want to join a company that doesn’t have a purpose they believe in and they can see through inauthenticity from a mile. You have to be authentic. You cannot talk the talk without walking the walk. So from that point of view, it is a very clear imperative that companies must have a clear purpose.

From a consumers’ point of view, we have a number of purpose-driven programs. We partnered with the World Food Program and said we would feed the hungry. We committed that by the end of 2018 we will contribute 100 million meals. What happens when we are trying to raise funds and to contribute? We ran this campaign across 19 countries in Europe. When we ran it, we said that each time you use your Mastercard, we will contribute a meal to a child in Africa. What we’ve seen is that we’ve had enough transactions that have been generated that we were able to add up that we’ll be able to feed about 300,000 children for one full year.

From that, we actually saw that our business has grown faster than the industry. For consumers, they say that if you as a brand are doing something good and everything else [with the competition] is equal, I would rather come to your brand. You cannot have a substandard service and hope that a purpose or a social cause will compensate for it. Give a good product and a service, add the layer of purpose and [business will] pick up.

But wasn’t there a recent snafu around your World Cup campaign pushing this program?
That’s completely different. This is a multiyear program that we are doing and it’s around the world. The blip that you’re referring to was pertaining to one small sliver of the entire campaign where our intention did not clearly come through. We were going to anyway contribute 100 million meals but the way people understood it was that we would only contribute if so-and-so scores a goal or scores goals.

That [campaign] was meant more to generate a level of awareness. So when we are trying to create and back any social cause we want to increase awareness, we want to make a financial difference and give momentum to that. This was meant to be inspirational awareness and that got sort of misunderstood. It’s okay if our intentions did not come through clearly. [We] adjusted that part of the campaign. It’s a small sliver that we have but our commitment to donate 100 million meals by the end of this year is very much on.

That must have been a learning moment for you guys.
First and foremost what we need to realize as a company, as a marketing community, is that you should look at every single campaign as a global campaign—even if it is run in one part of the world. The whole world gets to see it—they pick it up through some channel or another—so you should think about if [your message] is getting clearly across, without some sort of misunderstanding, across the entire world.

The second thing I would say is, look at each element of the campaign in totality by itself. If you take one element out of context and then see if it doesn’t make sense or skews an opportunity for misinterpretation, be aware of it. Take each module as a wholesome communication itself.

The third thing is to be committed to your purpose. Don’t let any blip deter you from your purpose but be nimble, agile and course-correct. Life is going to be full of surprises, some good and some bad. Be able to recognize and react very quickly. Be agile and nimble and make adjustments and move forward. When we made this particular adjustment with this particular campaign, the feedback has been very gratifying and we’re back on track racing towards 100 million meals. Right now we’ve already done 75 million meals so we’re well on track.