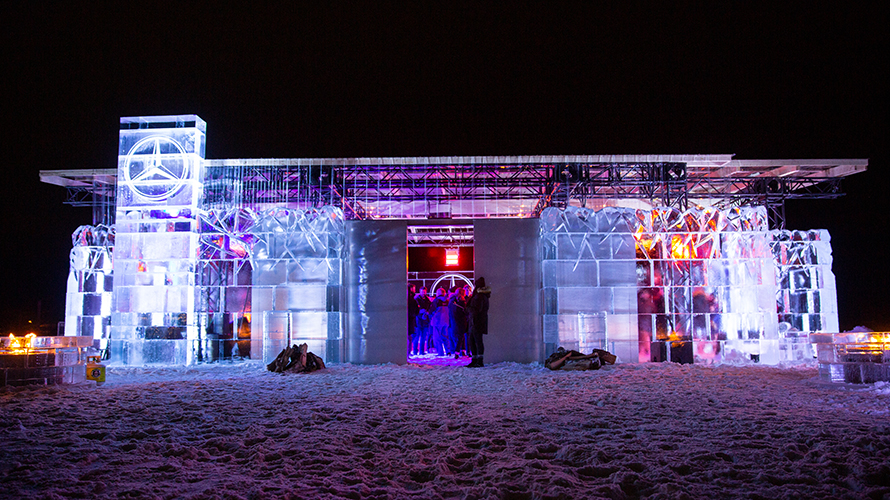 For the two-day event, Mercedes-Benz built a "garage" with blocks of ice for concerts and panels.
Mercedes-Benz Canada
Share
By Ian Zelaya
|
February 19, 2020
Share

Mercedes-Benz Canada has engaged consumers IRL with winter off-roading excursions and a small-scale concert series before, but the automaker recently combined both programs to launch a new, explicitly Canadian experience designed to boost brand awareness.

The brand in January held its first #MBOwnsTheIce event, which invited Canadian journalists and influencers to participate in winter-themed activities in the remote town of Gimli, Manitoba. The two-day event offered guests a chance to test-drive vehicles on icy racetracks and natural snowy terrain. The event also held concerts from Canadian bands in an unexpected venue, like a garage created with 88,000 pounds of ice.

“We’re constantly evolving and trying to reach audiences in new ways, as so many brands are,” said Virginie Aubert, vp of marketing, Mercedes-Benz Canada. “Mercedes-Benz is a very respected brand, so this was about generating new brand love and finding people to help us share our story with their fanbases.”

The brand worked with Pomp & Circumstance PR to put together the list of 60 invitees, half of whom were reporters for automotive and lifestyle publications. The brand flew attendees to Winnipeg International Airport and shuttled them to a hotel in Gimli, located about an hour north.

Mercedes-Benz Canada worked with agency of record Publicis Emil to conceptualize the event and release post-event content including video. According to Aubert, the biggest challenge for the brand was the logistical planning and execution—specifically building the massive ice venue that took months to coordinate.

“For this kind of program it took a village, including the town of Gimli,” she said. “When you’re building this type of ice sculpture, you have to have engineers in place, you have permits you need to get and it takes a lot of planning with partners.” 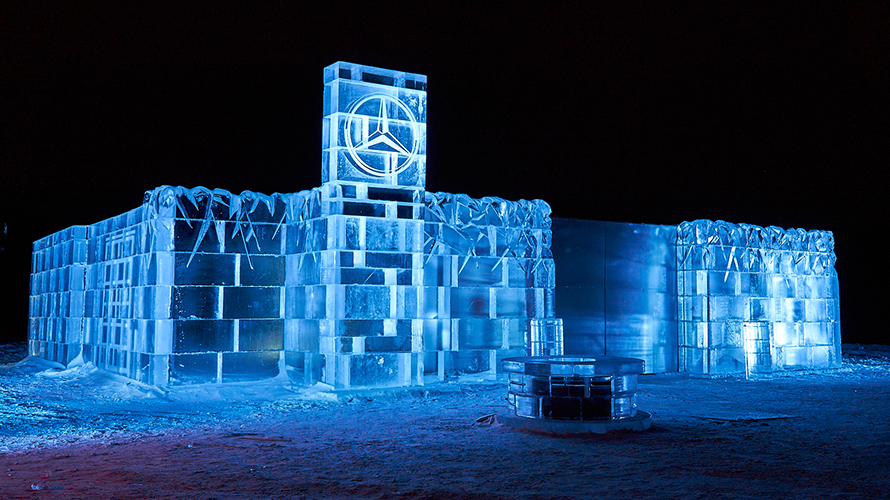 The brand worked with Publicis Emil to create the garage, made with 345 blocks of ice.
Mercedes-Benz Canada

Publicis Emil created the ice venue with 345 carved blocks of ice that each weighed 225 pounds. The structure not only served as an event venue, but also as backdrop for an ad for the Mercedes-Benz 4Matic vehicle and product walkaround videos that will live on the brand’s YouTube channel.

Developing the programming for the inaugural event was the easy part for Mercedes-Benz Canada. The brand is no stranger to Gimli, a town of a little more than 6,000 people. For the past four years, the brand has offered its AMG Winter Sporting program in Gimli, where people can pay to drive Mercedes-AMG vehicles under extreme conditions like ice and snow.

The condensed version of the program for #MBOwnsTheIce allowed guests with instructors to drive on a custom-built racetrack made of ice 40 inches thick. Guests could also participate in an off-road snow course, driving the brand’s 4Matic vehicles.

Mercedes-Benz Canada worked with Live Nation to book Juno Award-winning bands Said The Whale and Arkells to perform in the ice venue. To curate the artist lineup, the brand followed the model of its Garage Gig sessions, which launched in 2018. The series is designed to have Canadian musicians revisit their roots with live performances in unconventional settings. The series also includes a Spotify partnership. Live performances and behind-the-scenes interviews are available on the music streaming platform, along with playlists curated by the featured artists, which have included The Strumbellas and Allie X in the past. 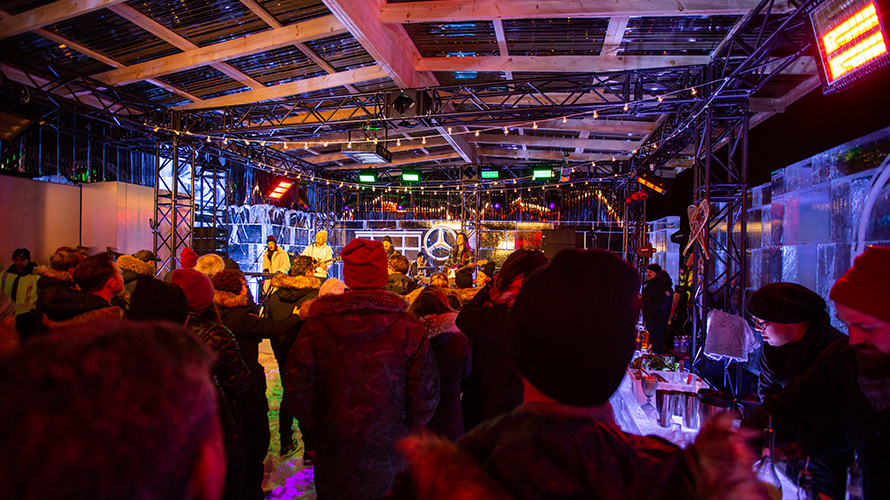 The venue held concerts by Canadian artists including Said The Whale and Arkellas.
Mercedes-Benz Canada

“As a marketer, you aim to create these one-of-a-kind experiences, but you never really know until the event is over if you truly delivered on that. We can probably say that we did,” Aubert said. “When it came to ROI, our objective wasn’t about selling a car tomorrow. It was about tapping into audiences in new ways and making sure we got our message out to a variety of people, whether they’re interested in a sedan or an SUV.”

Ian is an experiential marketing reporter at Adweek, where he covers brand activations and experiential trends.