Michael Phelps had a better 2016 than you.

He got married. He had his first child. He starred in the year’s best ad—an elegiac masterpiece by Droga5 for Under Armour. And at 31, the planet’s greatest-ever swimmer went to his fifth and final Olympics, in Rio, seeking redemption—four years after a lackluster (for him) London 2012, and two years after a fraying personal life ended in a DUI arrest (his second) and rehab.

Phelps grinded out a storybook ending to his swimming career in Brazil, winning five gold medals and a silver, putting his tally at a staggering 28 Olympic medals, and 23 golds. Just as important, he went out at an emotional and physical peak. He was in the best shape of his life and excited to be in the pool—a stark contrast to the motivational problems that haunted him before and after his first retirement, post-London.

“It’s been a crazy year, an honestly ridiculous year, one of the greatest years of my life,” Phelps tells me one late November afternoon in Manhattan. (He calls Paradise Valley, Ariz., home these days, and is visiting NYC for USA Swimming’s Golden Goggle Awards.) “I don’t know when everything will settle down, but it’s been awesome. Coming back, going through some ups and downs away from the pool, and being able to finish my career on my terms—that’s all I wanted.”

You couldn’t have scripted it much better.

Except now, it’s all preamble. How the most decorated Olympian in history writes the rest of his life—the business career he envisions for himself, in the mold of a Jordan or a Jeter; his charity work; his family life; his efforts to grow the sport of swimming; his endorsement deals; and his own burgeoning MP brand—is entirely up to him.

It’s not at all clear he can be as dominant out of the pool as he was in it. But he has the time, and the freedom, to pursue anything he likes. And there are signs, some of which weren’t evident even two years ago, that he might have what it takes to enjoy a very interesting second act indeed.

His Olympic exploits give Phelps unique, multifaceted value as an endorser.
Photo: Robert Ascroft
‘A Global Icon’
It will start, of course, with commercial endorsements, which have always provided the lion’s share of Phelps’ income. (He has made some $75 million off brand deals in his career, according to Money Nation, while his swimming exploits netted him less than $2 million.)

His unique value as an endorser is twofold: His accomplishments are unmatched, in any sport, and were achieved on a global stage. That combination of excellence and reach is tempting to any number of advertisers, particularly U.S. brands expanding overseas.

“To the extent anyone can be a global icon, Michael is. He’s recognizable and relevant in just about every market we want to be working in,” says his Maine-based agent, Peter Carlisle, managing director of Olympics and action sports at Octagon, who signed Phelps in 2002 when he was just 16 and has become one of his closest friends.

“Even if you find an athlete that is compelling in China, what’s the likelihood they’re equally compelling in Russia, in Brazil, in India? Michael is very popular in India. Just last week I got an offer from Pakistan. There just aren’t many athletes who move the needle in so many different markets.”

Many Olympians have a short shelf life. Exposure on one or two nights every four years often isn’t enough to sustain value, unless you’re a superstar. But Phelps has excelled at so many Olympics, and on so many nights at each one, that his value has become a constant—and could remain so, even with his lower visibility in retirement.

“When he’s at the games, it’s every day for nearly two weeks, and it is everywhere,” says Carlisle. “Everyone in every market on Earth, practically, watches some of it. Most people don’t remember his first one”—the Sydney Games in 2000, where Phelps, at 15, finished fifth in his only event, the 200-meter butterfly—”but the other four, he dominated. By the time you get to Beijing, I mean, that’s unforgettable. When you hit London, and you hit Rio, you’re just substantiating the platform he already has, the relevance he already has, in all these markets. People tune in to watch him win, and he does.”

Phelps is beloved in China, in particular, for the record eight gold medals he won at the Beijing Games in 2008. That love affair has continued, and is being leveraged. Phelps was just in China in November for events with a longtime partner, Under Armour, and a new one, Beats by Dre.

“As soon as we were done with the Olympics, we took him to China,” says Adrienne Lofton, Under Armour’s svp of global brand management. “We did pop-up workouts with him there. We had retail experiences with him. He brought his family—Nicole and Boomer were there. You’ll continue to see us do that. Bringing him to fans all over the world allows for that one-to-one interaction we believe in.”

“China has been so huge for me. I could never thank the Chinese fans enough for everything they’ve done and helped me with,” Phelps says. “When we were over there, I went to the Great Wall. I went back to the Water Cube. We were walking around in Beijing and Shanghai. It feels good to just feel the fans’ love and support. That’s something, in the past, I might not have noticed that much. But I feel it a lot more now with the changes I’ve made in my life.”

In addition to the global reach, there are Phelps’ irresistible core brand attributes—unmatched excellence, hard work, performance, achievement, success under pressure. It’s a potent mix for brands wanting to tap into a glow of extraordinary exclusivity.

“He’s the greatest Olympic athlete ever. Any brand on the planet would be lucky to be in the same room with him,” says Luke Wood, president of Beats by Dre, which signed Phelps to an ad deal after Rio. “He’s just a tremendous, tremendous winning athlete.”

‘A Natural Fit’
Phelps and his agent have been deluged by offers from brands since Brazil—sometimes half a dozen a day. But Phelps is selective, and applies a basic rule to partners.

“Every partner I’ve ever worked with is something that is already a part of my life,” he says. “Omega [watches]. A swimsuit company [first Speedo, now Aqua Sphere]. Under Armour—even before I was with them, I wore them. A good endorsement could be a lot of money, but if it’s not something I’m comfortable with, I’m not going to do it.”

Beats is a good example. The images of Phelps poolside, stone-faced under headphones as he preps for a race, are legendary. He wore Beats headphones in Rio—he had to tape over the logo, as the company wasn’t an Olympic sponsor—and it was only natural that the brand eventually came calling.

Phelps appeared in the star-studded “Got No Strings” Beats commercial from Anomaly that broke in October, and is also in its new “Be Heard” spot, which rolled out late last week. But Carlisle says the events in China are what really opened the brand’s eyes to Phelps’ potential.

“My experience has been that even the best marketers don’t realize the unique position Michael’s in until they’re in it,” he says. “With Beats, we said, let’s start working together. We’ll allow for it to be narrow, because he loves the brand. He uses the product. It’s a great image fit. And I have confidence that you will get it really quickly.”

In China, Phelps was welcomed like a rock star.

“Companies like this know what they’re looking for in terms of effect. And the effect is amazing,” Carlisle says. “It’s difficult to take an American athlete to China and create this effect. It’s just not an easy thing to do. Once brands use him, and they get that visibility, that’s when the magic happens.”

“We did an interview with him at the Apple Store in Shanghai, and 1.8 million people watched the livestream. That’s a big number,” says Beats’ Wood. “My instinct is that if we went to Moscow, or London, or Peru, people would react the same way. There’s a tremendous respect and love and interest in his accomplishment.”

Also in October, Phelps starred with Danny McBride in a big spot by 72andSunny for Activision’s Call of Duty, and with Jim Parsons in a campaign by mcgarrybowen for Intel.

Phelps was already a huge Call of Duty fan. He played it relentlessly last spring—logging, he has said, 500 games in two weeks—while prepping for Rio at the Olympic Training Center in Colorado. (He’s also an Activision veteran, having appeared with Alex Rodriguez, Kobe Bryant and Tony Hawk in a 2008 Guitar Hero campaign.)

The Intel deal was more “transactional,” Carlisle admits, with the brand capitalizing on the Rio success. One spot resurrected “Phelps Face”—the meme that went viral in Rio when Phelps was seen glaring angrily under a hooded sweatshirt in the ready room before a race.

“Some of those make sense. ‘He’s hot right now. Let’s do an ad,’ ” says Carlisle. “But the ideal partner is a long-term partner that integrates with the other things Michael’s trying to do. I like to think we’ll build a partnership with Intel that is very different than the one they initially envisioned.”

Phelps’ other brand partners include Omega watches (with him the longest, at 14 years) and a slew of smaller brands—Aqua Sphere, Master Spas, Krave, 800Razors.com and Sina Sports. But most compelling, perhaps, is his partnership with Under Armour, based in his hometown of Baltimore.

Phelps had been a UA fan for years, and finally signed with the brand in 2010 (after Carlisle renegotiated his Speedo contract to let him endorse another brand’s dry-land athletic wear). The Baltimore connection made so much sense, but it was more than that. As a gritty underdog brand, UA focuses its marketing largely on the pain and sacrifice of training. Who better, as an endorser, than a man who toils for years out of the spotlight for a quadrennial shot at glory?

That was exactly the theme of Phelps’ most recent Under Armour commercial by Droga5 (above), which broke in March—and which Adweek just named the best ad of 2016.

“He’s one of the most hardest-working athletes on our roster,” says UA’s Lofton. “There’s this unwavering determination to be his best self. Working out constantly is the kind of DNA we believe in at Under Armour. It’s the will of the spirit of the athletes that Michael absolutely represents within himself.”

‘The Imperfection of Life’
Beneath his superhuman feats, though, Phelps is very human indeed.

Asked to name his most compelling characteristic, the first thing Lofton mentions is not his greatness but his humility. It’s an answer that resonates, given Phelps’ well-known mistakes out of the pool—the first DUI arrest at 19; the leaked photo of him smoking from a bong five years later; the second DUI arrest in 2014.

These weren’t isolated incidents. The downward spiral in Phelps’ personal life after Beijing has been well documented—the lack of motivation or purpose, the drinking, the crumbling relationships with friends and family. Something was clearly wrong by the time of the London Games in 2012. He performed admirably, winning four golds and two silvers, but could hardly bring himself to train beforehand. He had lost his passion for the pool. 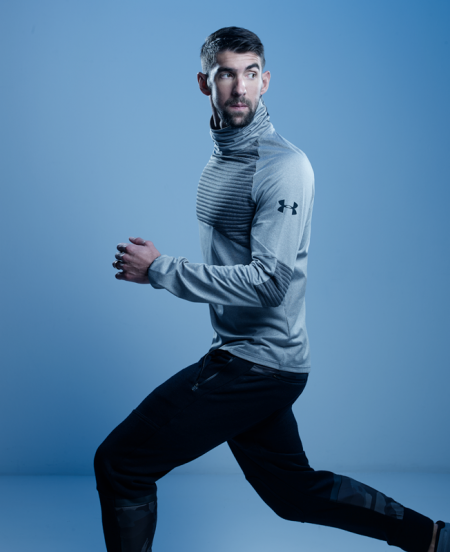 The Under Armour connection is about Baltimore, and so much more.
Photo: Robert Ascroft
@nudd Tim Nudd is a former creative editor of Adweek.