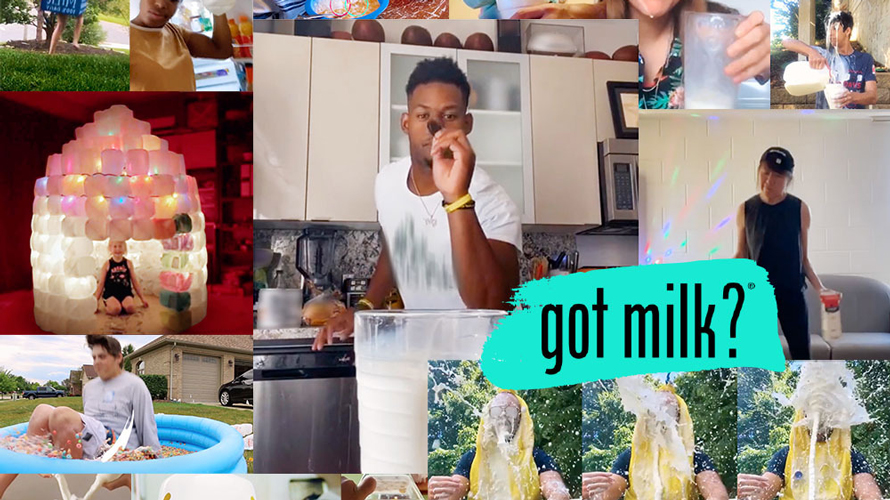 The new campaign includes a TikTok challenge. - Credit by MilkPEP

After launching in 1993 with the classic, Goodby Silverstein & Partners-created and Michael Bay-directed “Aaron Burr” spot for the California Milk Processor Board, the tagline was later adopted by the national milk processors’ organization, MilkPEP. But in 2014, MilkPEP decided to head in a new direction, leaving “Got Milk?” behind. (Its California counterpart, however, still used the slogan.)

Now, after a surge in milk sales amid the coronavirus pandemic, the slogan has been resurrected for a new generation of consumers. Milk sales are currently up 4% year-to-date, reversing a steady, decadeslong decline of the dairy product’s popularity. To capitalize on that, the new campaign, in partnership with Weber Shandwick, celebrates people interacting with milk on social media while they’re stuck at home, quarantining or working from home due to Covid-19.

“The answer to the question of ‘Got Milk?’ is clearly yes,” said MilkPEP CEO Yin Woon Rani. “Yes in a very positive, fun, happy, optimistic way. And we felt like the world needed that message right now.”

The campaign includes a TikTok challenge that MilkPEP launched in partnership with Olympic champion Katie Ledecky, who swims the length of an Olympic pool with a glass of chocolate milk balancing on her head. So far, the #GotMilkChallenge hashtag has 432.4 million views on TikTok.

In addition to Ledecky, MilkPEP recruited roughly 20 other influencers and sports stars to participate on TikTok and Instagram, including TikTok stars Michael Le and Jason Coffee and professional basketball player Crissa Jackson.

Possibly one of the best swims of my career! (~open for debate~)
What can you do without spilling a drop?! Check out the #gotmilkchallenge on TikTok. #gotmilk #ad pic.twitter.com/F05UzvaqCo

It’s hard to pinpoint exactly why people are gravitating toward dairy milk during the pandemic, especially a growing trend toward plant-based alternatives to the dairy beverage. There are a few clues, though.

“80% of milk usage is at home,” said Rani. And while MilkPEP did find that people having been consuming milk in the expected places, like over cereal or just in a glass, it’s also tracked a lot of usage in snacks, baking and cooking.

Milk is also a top priority for moms. According to a MilkPEP survey, 72% of moms said milk was their No. 1 “must-have” when stay-at-home orders were announced earlier this spring.

The new campaign includes TV spots that will run on social, digital, streaming and linear. Later in the year, MilkPEP plans to release followup spots and more partnerships with sports stars and influencers, Rani said.