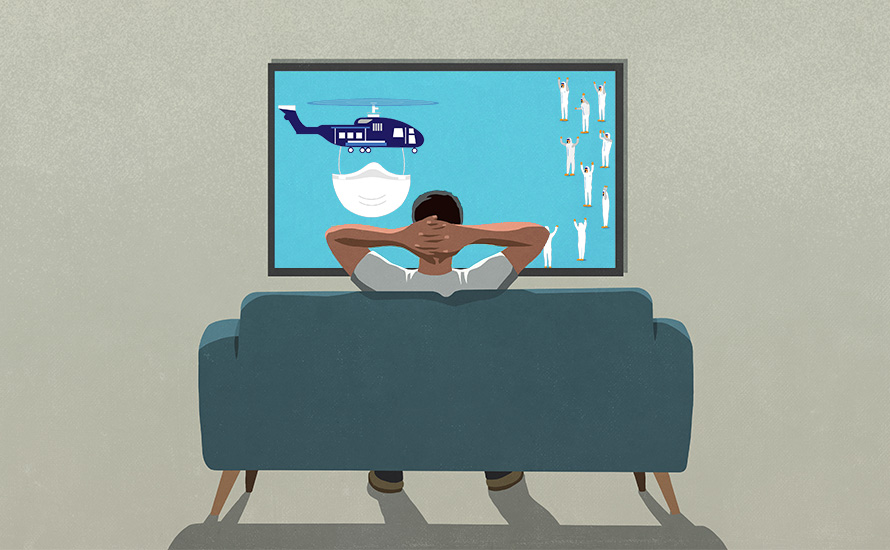 Consumers want brands to address the crisis, but how they want to see that changes as they process it. - Credit by Getty Images

While several studies have been conducted in recent weeks in hopes of understanding what consumers need during an unprecedented global health crisis, many of them seem to just reflect the obvious rather than building a more helpful framework through which to see what’s happening around us.

In contrast, Dentsu Aegis came up with a set of phases—based on the five stages of grief—to help garner more from survey respondents. Asking people which phase they identified with, and how that’s changed over time since the pandemic began, created an insightful set of information to help brands navigate the emotional storms that consumers are currently weathering.

“What we really wanted to do is to look at COVID through the lens of consumers’ need states, because that’s kind of a gap that we had seen,” said Joanna Hawkes, vp of integrated strategy at Dentsu Aegis. “What are they experiencing as this crisis unfolds? What are their unmet needs?” 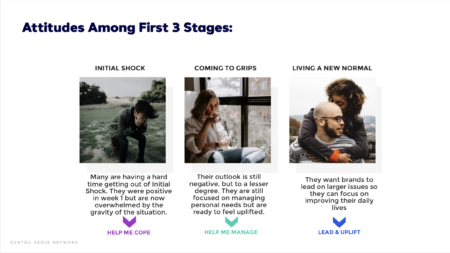 While there are five stages overall, most people place themselves in one of the first three.
Dentsu Aegis
In addition to those different levels of need, the study also highlighted the differences between generations regarding how they’re consuming information from brands. For example, more than half of millennials and Gen Zers said they’re paying more attention than usual to what brands are doing right now, and how they’re advertising during the crisis.

By breaking these responses down into stages of response to the crisis, the study gives brands something of a roadmap for how messaging should change moving forward.

At first, consumers at large were most focused on simply coping with the reality of the pandemic. They were worried about the way that it’s affecting their jobs, canceled events,  feeling isolated and struggling with how to care for others. 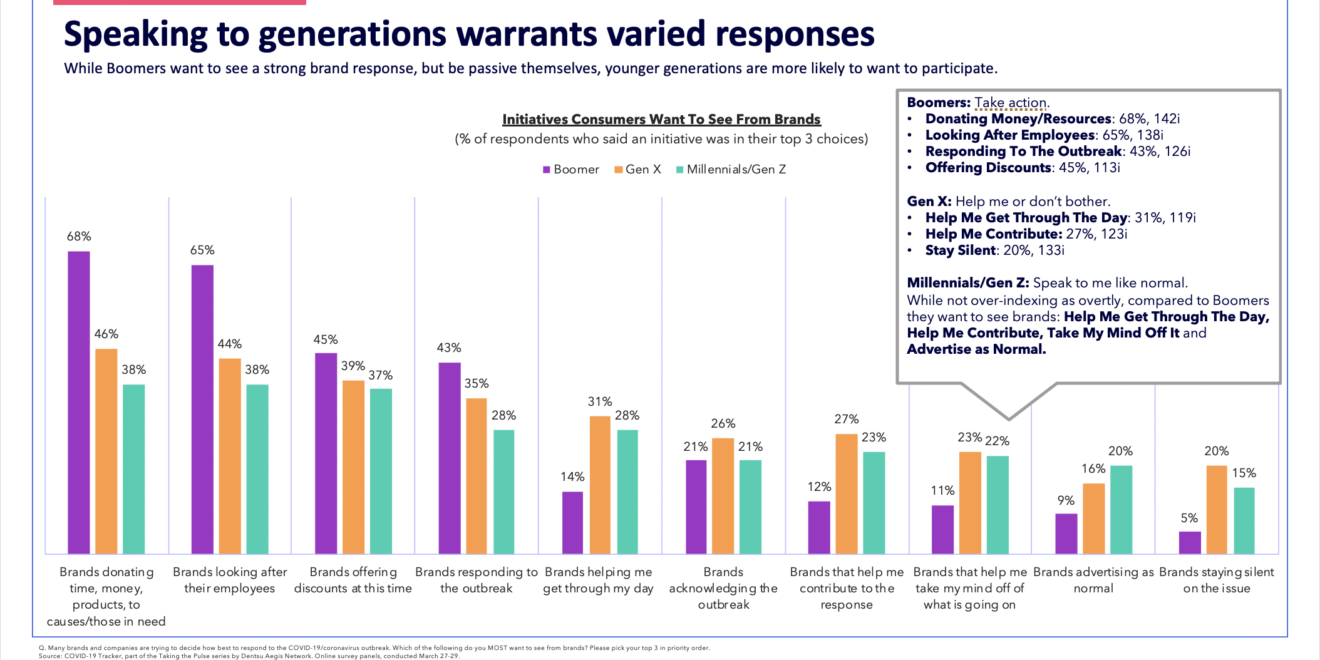 In the first wave of responses, the survey showed that younger generations wanted distractions from brands.
Dentsu Aegis
“The percentage of respondents who were saying they were ‘extremely concerned’ was actually decreasing as people move through these phases,” said Megan Keane, senior strategist at Dentsu Aegis. While the first wave of responses showed about 60% of people as extremely concerned, that dropped to around 30% later on.

But there’s a generational component within those phases, too. At first, younger generations—Gen Z and millennials—worried more about life events being canceled and their mental health. Gen X was worried about the people in their care, and Baby Boomers were most concerned about contracting the virus themselves and how the economy would be impacted.

As people moved from “initial shock” into subsequent stages that Dentsu’s researchers called “coming to grips” and “living in a new normal,” they found that overall, consumers were looking for less distraction and support, and more action from brands. As people get used to their new routines and the fear associated with those initial impressions of the crisis wear off, they start to expect more from brands. 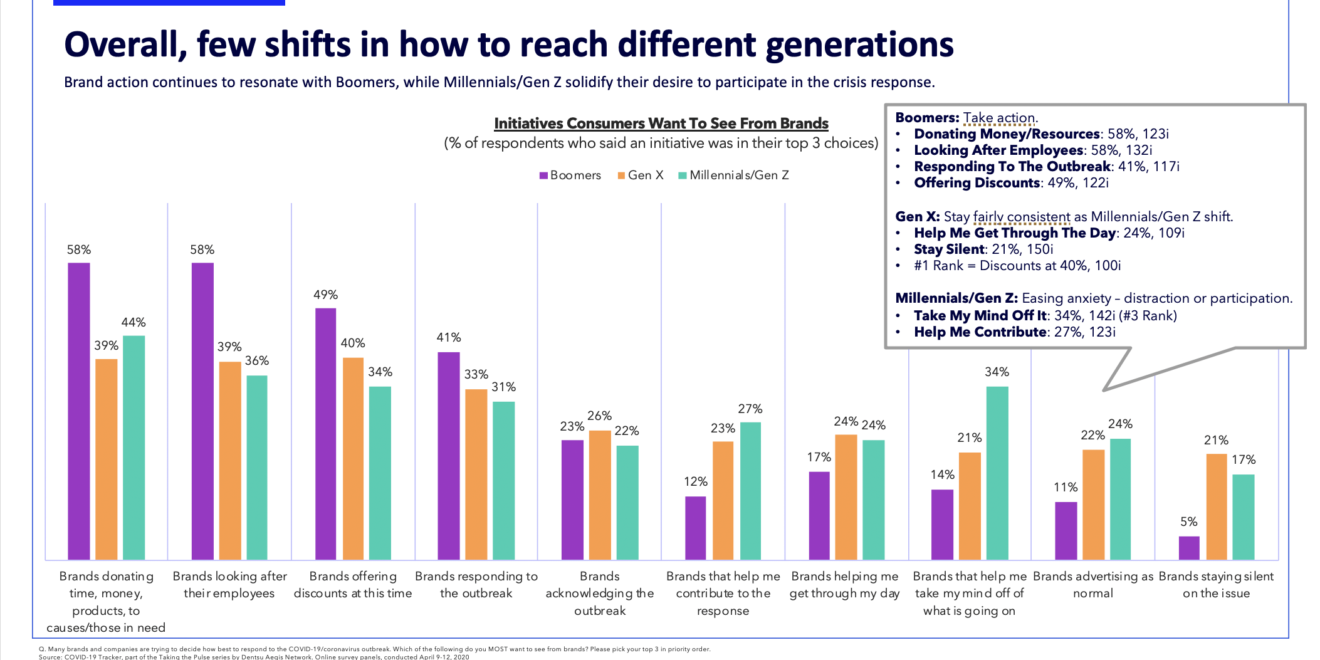 Later, Millennials and Gen Z still wanted the distractions—but they also wanted to know how to contribute.
Dentsu Aegis
While boomers wanted to see brands supporting their employees and donating to those in need, millennials and Gen Z expressed a desire to get involved in the crisis—and wanted brands to show them how to do that. But even as the younger generations want brands to address the pandemic, they still appreciate it when brands help them get their minds off what’s happening.

But across the board, consumers reported being impressed by what they were seeing overall from brands. “Consumers do think that brands are doing a good job, are stepping up,” Keane said, “and there’s really that appetite to see more of that in the coming weeks.”

Don't miss Adweek NexTech, live this week, to explore privacy, data, attribution and the benchmarks that matter. Register for free and tune in.
@klundster kathryn.lundstrom@adweek.com Kathryn Lundstrom is Adweek's breaking news reporter based in Austin.