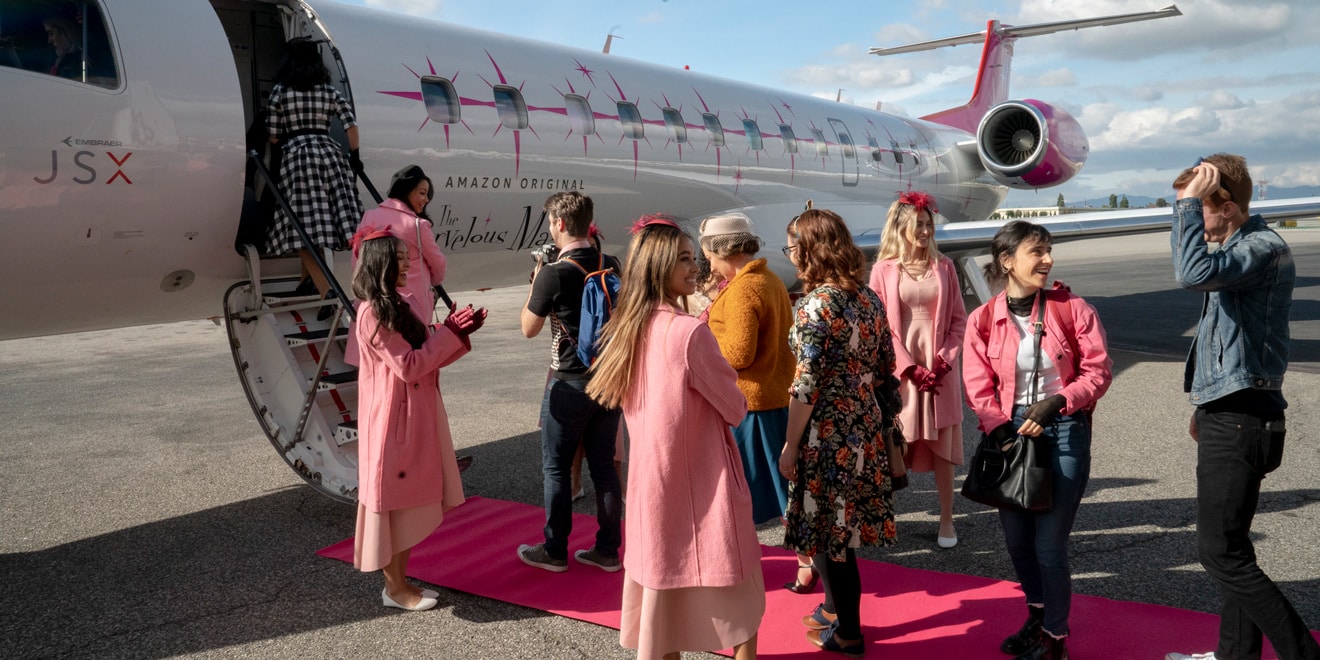 The fans were encouraged to dress in '60s outfits and flown on a Maisel-branded jet. - Credit by Amazon Prime Video

Climbing aboard a Maisel-approved bright pink jet, fans clad in ’60s-themed attire were whisked away from Burbank, Calif., and into an immersive “One Marvelous Night in Vegas” on Dec. 5. While in the air, attendees were treated to themed cocktails, goodie bags filled with gifts inspired by the show and an announcement recorded by Midge Maisel herself (Rachel Brosnahan). Upon arrival, guests attended Vegas! The Show, and stayed the night at The Cosmopolitan of Las Vegas. Fans were chosen based on social media posts that they’d made about the retro show over its first two seasons—the third debuted on Dec. 6. Amazon previously hosted Maisel fan events for the first two seasons, and the show was just renewed for a fourth.

Read more: The trip kicked off a month of promotion for the third season, which also features eight nights of events to celebrate Hanukkah.

Bustle Digital Group Has Been in the Business of Acquiring Publications. Now, It’s Creating Them

With a new content management system, BDG is hoping to beat the odds in the digital publishing industry by giving readers an interface that more closely mimics social media-style consumption. “It’s a really challenging time in digital media,” said Jason Wagenheim, BDG’s chief revenue officer. “We know what works and what doesn’t. And we feel really confident that this is going to be a game changer.” The CMS, which BDG describes as a “card story” format, launched yesterday with Input, a new tech-focused online magazine from Josh Topolsky, co-founder of The Verge and founder of The Outline. The format is designed to grab readers’ attention and attract ad dollars that are currently being soaked up by social media platforms.

After creating the role of chief growth officer just three years ago and eliminating the global CMO position, Coca-Cola is splitting up operations and marketing roles following chief growth officer Francisco Crespo’s retirement announcement. The restructuring bucks an ongoing trend of brands swapping the global CMO role for a more strategy-focused CGO position. Over the last several years, companies like Lyft, Hyatt and Johnson & Johnson have all followed this trend, though it’s certainly not the majority of brands—according to a report by Singular over the summer, just 14% of companies had a CGO position. Crespo will stay on in an advisory role at Coca-Cola through June of 2020.

The first thing to note, of course, is the arrival of Disney+ and Apple TV+. Both were introduced into the market last month, but Baby Yoda, among other things such as an extremely enticing offering, have meant Disney+ is currently ahead in that fight with more than 10 million signups in its first two days. Disney also took over Fox, and is in the process of taking over Hulu, and also the world, basically. Viacom and CBS also merged this year, while AT&T-owned WarnerMedia and Comcast-owned NBCUniversal slowly dropped details related to their forthcoming streaming services. New ad-supported video-on-demand platforms also cropped up as alternatives to the subscription services, with newcomers like Pluto TV and Tubi.

Read more: Roku Channel, Vudu and Xumo are all also trying to find sure footing in the AVOD path.

Agencies Reveal How to Celebrate the Holidays in a Unique Way

We host a year end holiday dinner for our internal team at a nice restaurant and a party at a local brewery for all of the contractors we work with through out the year. We do a lot of production work so the contractor network is strong.

We do a debrief to go through what worked and didn’t including areas of improvement and celebrate the successes.

ICYMI: Video Mashup: The Most Memorable Ad Moments of 2019

Video by Joshua Rios
All of the ads of the year in one, brilliantly curated four-minute mashup? Yes, please. Just be ready to feel a lot of feels.

More of the Latest: