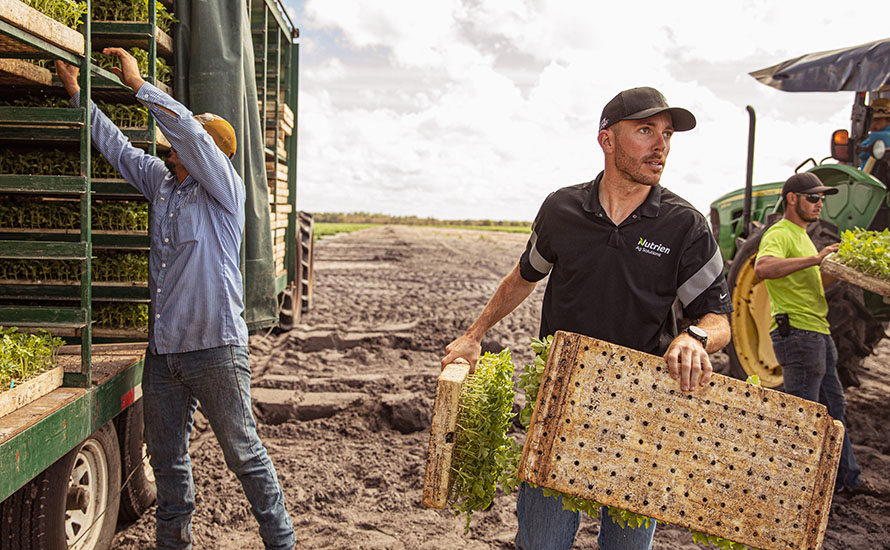 Ross Chastain combines his love of racing and farming in the docuseries. - Credit by Courtesy of Nutrien

What does farming have to do with Nascar racing? More than might appear at first glance.

Nutrien Ag Solutions, the retail division of Nutrien that sells fertilizer and seed to farmers, is taking a different approach to its marketing by introducing a docuseries featuring professional Nascar driver Ross Chastain called Two-Track Mind.

The series aims to engage with a broader audience beyond traditional Nascar fans, while providing education and connecting people with their food supply, said Brent Smith, Nutrien Ag’s vp of marketing. The 12-part documentary is airing now on Nascar’s YouTube channel; however, due to Covid-19, it is uncertain when the season will conclude.

For Chastain, who hails from a multi-generation watermelon farming family in Florida, filming the series is like coming home. In the first episode, that meant literally heading back to the farm as Chastain dug into his own roots by introducing the audience to his childhood home.

“Relating my two passions is something that I’ve tried to do since I got into Nascar,” he said in an interview with Adweek.

Chastain said that while his desire is to compete for championships in Nascar, he also wants to create demand for watermelons, tying back to his family’s work.

In addition, filming the series allows Chastain to meet farmers as he criss-crosses the U.S. as a driver on the racing circuit. During that journey, he interviewed farmers from all over the country living near Nascar’s racetracks in order to tell their stories of hardship and success.

“The best part of telling this story is there is no script. [It’s] genuinely what we want to talk about,” Chastain said.

The racer’s connection with Nutrien goes beyond the brand’s sponsorship of his No. 10 Kaulig Racing team (it became a full-time sponsor this year). His family have been customers of the company for a number of years. “It’s more than stickers on race cars,” Chastain said of the sponsorship and documentary.

The series also points to Chastain’s early interest in racing, another passion of his family.

He began racing as a hobby at the age of 12, when he drove his first truck on a track. That led to short-track racing on Saturday nights and ended up involving his father, uncle and grandfather, who are fans both of the sport and, unsurprisingly, of Chastain.

It brought the whole family together, he said. The teenage hobby became more serious, and at the age of 18 Chastain began truck racing with Nascar. That gradually evolved into stock car racing.

Today, Chastain ranks fourth in the overall standings so far this season in Nascar’s Xfinity Series. He placed second in his most recent contest, the Unhinged 300 at the Talladega Superspeedway, nabbing a $100,000 prize.

Nutrien was first introduced to Chastain by retired Nascar driver Elliott Sadler, who was sponsored by the agriculture services provider until last year. That led to a conversation in the fall of 2018 with Chastain.

Smith said his company was looking to sponsor someone long-term who had ties to farming. Not only was Chastain an ideal brand ambassador, but also an advocate for agriculture, Smith said. “He really knows racing and farming,” he added.

That gave birth to the idea of the docuseries, which Smith described as something simple that could feature Chastain as an up-and-coming Nascar driver, as well as tell a broader story around farming.

To create the documentary, Nutrien worked with its agency of record St. Louis-based OBP Agency, a full-service marketing firm.

For its part, Nutrien saw a strong geographic correlation between the location of racetracks and its retail branches, as well as crop production as a whole, according to the company. “In short, farmland and ‘raceland’ have a similar footprint,” a spokesperson said.

According to the data Nutrien studied, farmers also have an “overall affinity” for motor sports and are more than three times more likely than the average American to be a fan of Nascar.

As a result, the agriculture retailer deemed it would be a cost-effective way to build awareness of the brand among farmers and those they are surrounded by, making it a household name.

“Nascar has been a super partner for us,” Smith said.