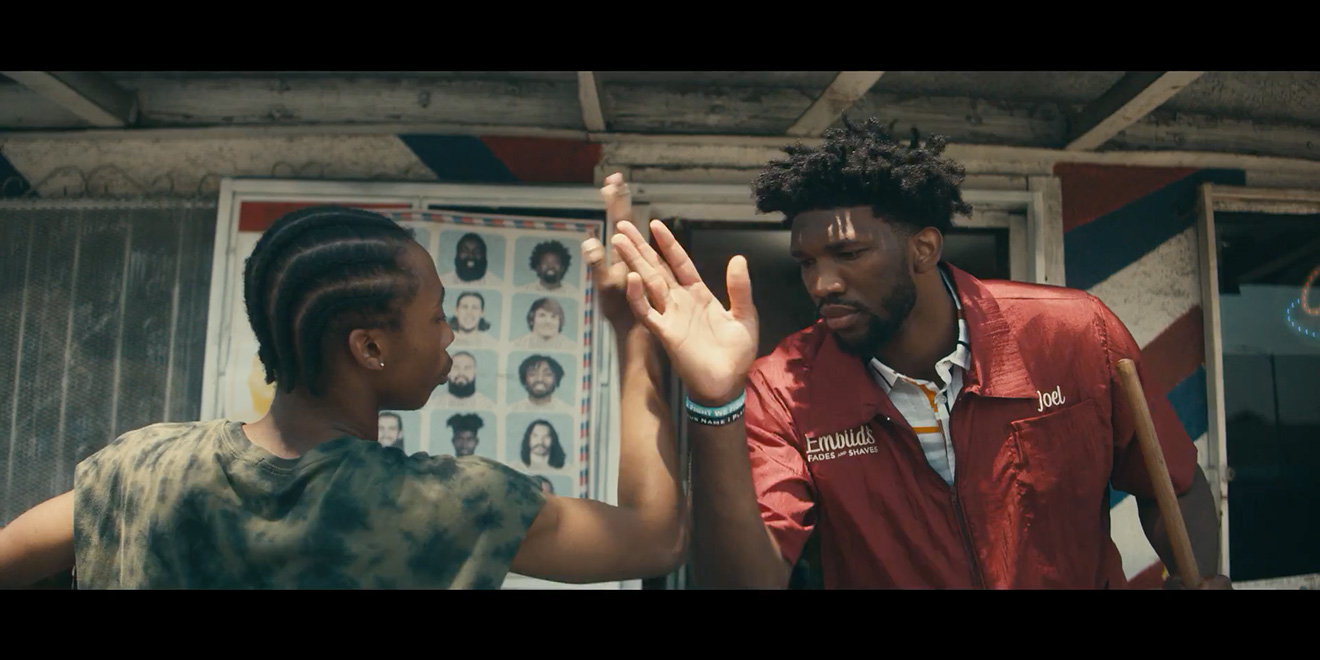 Those three big-time ballers, plus seven more NBA stars, pop up around an otherwise typical city neighborhood in CP+B L.A.’s fun launch film for the latest version of NBA 2K, which drops Sept. 19.

In this ZIP code, you run into league royalty virtually anywhere—at the barber shop, tattoo parlor, used record and CD emporium … even the local basketball court. But the teen dude at the center of the action plays it extremely cool, at one point telling Irving, “It’s just another day in the neighborhood.”

“Neighborhoods are really the birthplace of basketball culture,” agency creative director Barnaby Blackburn tells Adweek. “We liked the idea of this perfect basketball neighborhood, a place with all the venues you’d expect to find in an everyday neighborhood and with all the regulars you’d expect to bump into. The difference being that these regulars, from the barber to the tattoo-shop owner to the guy playing cards on the steps, are NBA superstars, and that everything in this neighborhood exists to serve basketball.”

“We needed a vehicle or guide to get us through the neighborhood, so we liked the idea of a kid walking from his apartment to go play basketball on a sun-drenched afternoon, meeting all the regulars on his way, and greeting them like you would the locals of your own neighborhood,” Blackburn says.

Anesu Mutara’s chill performance—strolling through South Central Los Angeles and Long Beach during a two-day shoot in June—provides a relatable focus in the midst of the celebrity full-court press.

“The final ingredient was the handshakes with each player,” Blackburn says. “Of course, these elaborate handshakes are common in basketball and are emblematic of the tight-knit relationship teammates have with each other. There was something we loved about how this regular kid is tight with the greatest players on the planet, and how in this neighborhood they’re on the same level.”

This marks another notable marketing push for the NBA 2K franchise from CP+B, following its work for NBA 2K17, which featured a Fitbit tie-in encouraging gamers to get more exercise IRL. That work was honored this week by Adweek’s Project Isaac Awards as one of the most innovative campaigns of the past year.

As for NBA 2K18, director Stacy Wall of Imperial Woodpecker has walked similar streets before. He helmed Nike’s acclaimed “Short a Guy” spot from 2015, which followed an average kid who spends a magical day interacting with his heroes from various pro sports teams.

Though the set-ups in the two ads are pretty much the same, the vibes are quite different. “Short a Guy” has a quick-cut, fantastical feel—like a fan’s frenetic fever dream come true. And at times it’s played for laughs. (Pick-up lacrosse? Really?) NBA 2K18’s “Run the Neighborhood,” despite its impressive star power, casts a subtler, more personal aura. Wall’s deliberate pacing and dense visual palate impressively integrate the hoop legends into a slightly skewed version of everyday reality. Also, there’s a muted, retro ambiance (the record store is one example) that adds an extra layer of emotional resonance.

“The intention was to create something that had a slightly nostalgic feel, to transport you back to those perfect summer days when all you wanted to do was hang out and play ball,” says Blackburn. “It’s a summer basketball hallucination with this regular kid walking through the neighborhood shaking hands with his everyday friends who just happen to be NBA superstars. Above all, we wanted people to smile while watching it, to enjoy this kid’s journey and want to be in his shoes.”