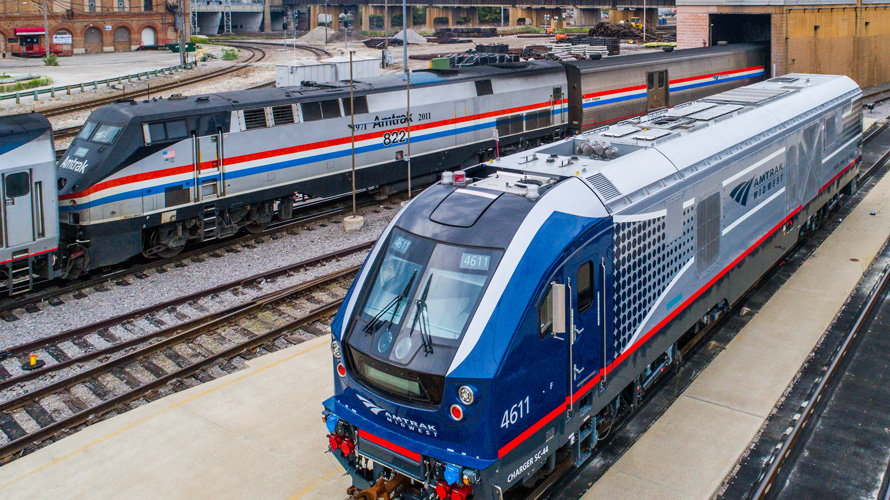 Amtrak is exploring new processes and technologies to enhance the safety of passengers. - Credit by Amtrak

Many companies allow a new CEO to take a few weeks to ease into the job. William Flynn hasn’t had that luxury.

The veteran transportation executive, who’d most recently run charter operation Atlas Air Worldwide, was tapped to be Amtrak’s new chief on March 2—just as it was becoming clear that the coronavirus was going to interrupt and reshape American life in tectonic ways. Flynn wasn’t supposed to report to work at the railroad until April 15. Instead, within days of getting the job, Flynn packed his New York home into boxes and moved to Washington. As chairman of the board Anthony Coscia put it, “He was pretty much working full time from the start.”

Now, roughly six weeks later, some of what Flynn has been working on has come to light. In a call with reporters Thursday afternoon, Flynn and other senior Amtrak officials outlined some of their plans for the national passenger railroad once all of its trains start running again. (As of April 22, the railroad has suspended six runs and reduced frequency on 20 others.)

Flynn also briefly discussed an issue that will be pivotal for Amtrak in the coming weeks: how to market its services to a fearful public.

“We’ve made adjustments to our network and our ridership is down significantly, and that’s going to continue for some time,” Flynn said. “But part of our efforts is to think about recovery.”

Amtrak’s ridership is indeed down—by a nauseating 95%, which is on par with the plummet that airlines have sustained. Coscia estimated that the system’s losses would hit $700 million, “and it’s possible losses could be greater.” The news was especially bitter since Amtrak had been on target to break even this year for the first time since Congress hammered the company together from the remnants of America’s dwindling private passenger railroads in 1970.

As for exactly what a full restoration of service would mean, Flynn preferred a general outline to specifics. “A clear view of what that’s going to look like? We don’t have that right now,” he said. But Flynn did suggest that once the railroad’s 21,000-mile system returns to full operation, it’s likely to incorporate several of the safety and precautionary measures first put into place as Covid-19 tightened its grip on the nation.

Right now, for example, Amtrak is not booking coach and business-class cars at more than 50% capacity. Employees are all wearing face masks. The railroad has also adopted cashless payments and increased the frequency that its rolling stock is cleaned. Flynn suggested that passengers will need the reassurance that these and other measures provide if they can be enticed to return. Amtrak, he said, is “continuing to work through what more we can do through car cleaning and disinfecting, insuring we have cleaners on the train during the route, to build some level of assurance with our customers.”

Flynn also said that he and his team were “thinking through what the environment might need to feel like on the train for customers to come back,” and hopes that the ones who do return will help build Amtrak’s passenger counts. “Hopefully, through word of mouth,” he said, “[they’ll] share a good story about Amtrak and create new customers.”

Word of mouth is never a bad way to build a brand, though Flynn also said that Amtrak is thinking about the role that advertising will invariably play in getting passengers back on board.

“Our marketing organization right now is researching to understand what travel [messaging] is going to look like as we begin to come back from the low-level operations,” he said.

Historically, Amtrak’s marketing tended to revolve around themes such as the convenience of taking the train, picturesque views outside the windows, and how rail travel, while it may not be faster than flying, is a lot more pleasant. In 2017, for example, its “Break the Travel Quo” campaign reminded travelers that Amtrak cars have no middle seats.

Technology, too, will play a part in establishing customers’ sense of security in the Amtrak realm.

Flynn conjured a futuristic railroad indeed when he mentioned he was considering “what does a touchless environment look like?” But for the near term, touch reduction appears to be a bit closer to the mark. Stephen Gardner, Amtrak’s senior executive vp and chief operating and commercial officer, said the railroad will be adding more of the enhanced versions of its Quik-Trak kiosks, for example. Passengers can also get their gate and boarding information via text, which minimizes the amount of time spent wandering around the station.

“There’s a whole suite of technology we’ve been working on,” Gardner said, adding that “in response to the crisis we’re in now, and the changing expectations of customers, we’re looking to see how we can accelerate that work to create less contact.”

Meanwhile, Flynn’s early clocking in is, for the railroad, an undeniably solid value: For the time being, he has agreed for forego his salary.