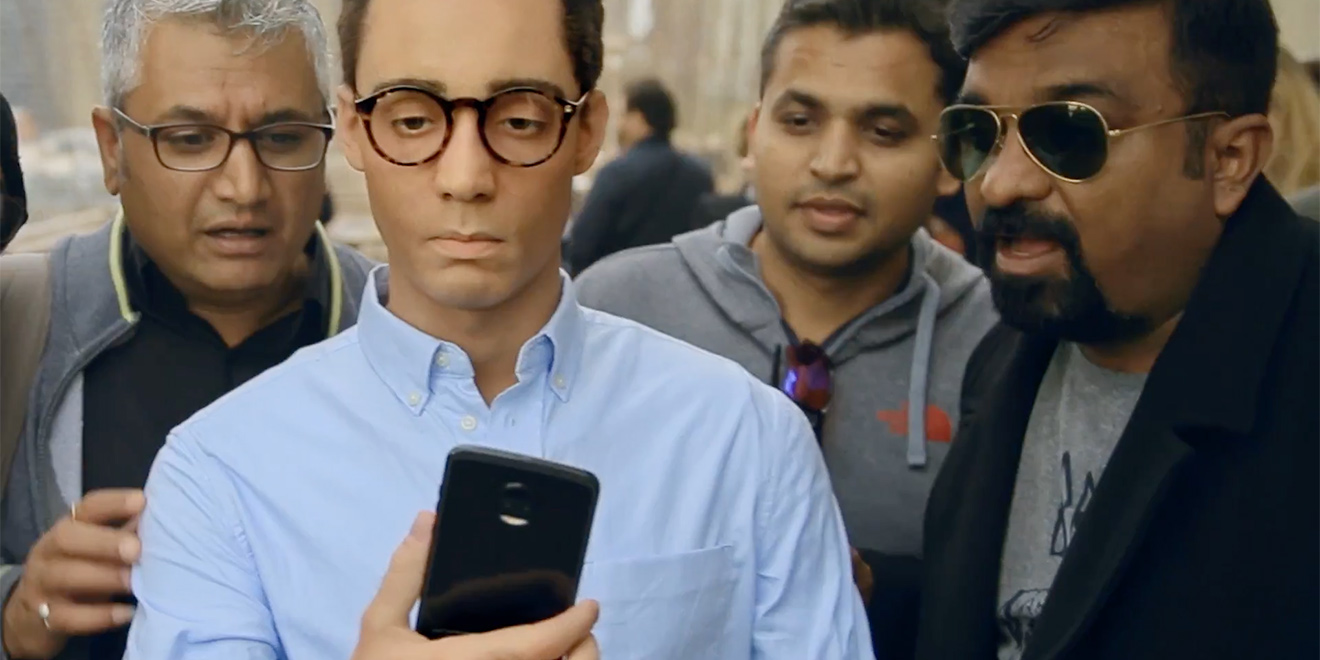 It’s happened to all of us at one time or another. We’re trying to inch forward at the checkout or get through a door, retrieve our bags at the airport or simply move down the sidewalk and—wham—we smack into some nitwit (often, we have more colorful terms) standing there frozen, eyes glued to a smartphone.

Such are the annoyances of modern life, of course. But what if our obsessiveness with smartphone checking and, in particular, the catatonic state we enter when we do is causing far bigger problems? What if, as a result, we’re actually devolving as social creatures? Even worse, what if using these supposedly life-enhancing devices is actually robbing us of important life experiences we took for granted before we all had these little screens in our pockets?

Such are the questions posed in a new pair of ads from Motorola.

Created by Ogilvy & Mather, the shorts offer a familiar yet startling look at just how much consciousness we give up when we take “just a second” to check our phones. Because, of course, it’s never just a second at all. It’s many minutes and, during that time, as the videos make clear, cellphone zombies become not only a hindrance to those around them, but a detriment to themselves.

The first spot, “Real People,” features an experiment reminiscent of the old Candid Camera show. A lifelike mannequin, its eyes glued to the smartphone in its hand, stands anchored in various high-traffic locations around Manhattan, including the top of subway stairs and in front of a hotdog cart. As passersby notice that the immobilized New Yorker may not be real and creep in for a closer look, they notice the message on the cellphone screen: “How many times a day do you look like this?” (The answer, of course is more times than we probably care to admit.)

The theme of the second spot, “Hello Vacation” is, while perhaps not as funny, even more poignant. The video portrays Americans vacationing in some of the world’s most beautiful and exotic locations but missing every minute of the experience because their attentions have been sucked into the maw of a smartphone screen.

Motorola has pegged this effort to the smartphone’s 10th anniversary and also to a growing body of evidence that suggests our smartphone use may really be more like a smartphone addiction. (Citing statistics from Morgan Stanley, Motorola says 91 percent of us now have a smartphone within arm’s reach and close to 50 percent of us admit we couldn’t live without our devices.)

“Motorola believes that a better phone-life balance makes us happier and more connected to the people and environment around us,” the company said in a statement. “That’s why we’re asking people around the world to examine their smartphone behavior.”

Of course, the skeptic may well question the messenger here. While Motorola’s concern may be genuine, it does make and sell smartphones. According to one estimate, nearly 11 million of us use the brand as of 2017. At the same time, it can’t be bad corporate stewardship for a brand that makes a product that can be misused to warn consumers about the dangers of misusing that product. Alcohol brands have been doing it for years.

What’s more, Motorola is getting out in front of an issue that is growing in visibility. A study released by the University of Texas at Austin in June 2017 found evidence to suggest that when a smartphone is in reach, our cognitive capacities are reduced. And a survey the previous year from Common Sense Media found that half of teens believe they are addicted to their mobile devices.

All of which is a compelling argument to leave the damned things turned off and out of sight every so often—certainly if you’re on vacation, or on line for a hotdog in New York.