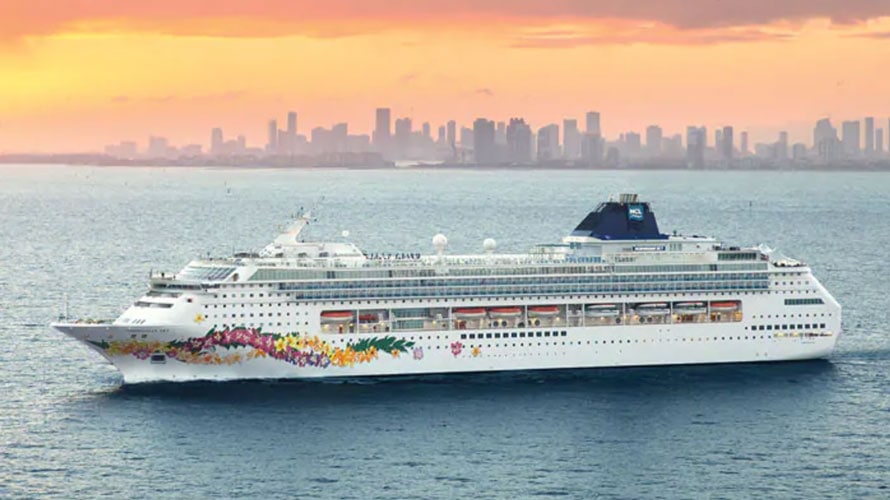 Like the plastic straws and disposable chopsticks that were metaphorically tossed overboard, Norwegian Cruise Line has its sights on its next target: plastic water bottles.

The Norwegian Encore, which sets sail in November, will be Norwegian’s first to eliminate single-use plastic water bottles at sea, the company said on Wednesday. The rest of the fleet, 16 ships in total, is set to join by Jan. 1, 2020.

Norwegian said the move will replace over 6 million single-use plastic bottles every year.

Practically a floating hotel, Norwegian joins the likes of Marriott and the InterContinental Hotel Group—both of which ditched miniature toiletries this year—in adopting more sustainable practices.

“It is a substantial change …We’re looking at everything. We have a list of [disposable] things, and we are going to feasibly eliminate them one by one,” Andy Stuart, Norwegian’s president and CEO, told Adweek. “It’s not a buzzword, it’s not a press release. It’s a journey our company is on to drive meaningful change.”

While Norwegian will be the first “major cruise line” to eliminate plastic bottles at sea, Virgin Voyages, which won’t set sail until April of 2020, made its announcement to forgo single-use plastics in July 2018. That includes plastic water bottles, plastic straws and shopping bags.

Unlike Virgin, which will have “water stations” throughout the ship and carafes in the cabins, Norwegian is using an alternative supplier. Paper cartons will be supplied by JUST Goods Inc., a brand that sells natural and flavored waters packaged in paper cartons topped with a recycled lid made from sugar cane.

Stuart said this latest move is a step toward eliminating all single-use plastics like Virgin, although he wouldn’t say when that would be.

“We’re going to go as fast as we can on this journey. It’s complex to deal with and we need partners like JUST Water in a number of different areas,” Stuart said. Previously, Norwegian had its own brand of water bottles, although Stuart couldn’t name the supplier.

Founded by the rapper and actor Jaden Smith when he was 11 years old, JUST’s cartons are made of 82% renewable materials and are both recyclable and refillable. The company has bottling facilities in New York, Ireland and Australia and in a statement said that it would take the most efficient “shipping options available” to deliver its cartons.

“We’re deeply appreciative of Norwegian’s commitment that’s so similar to ours,” said Ira Laufer, JUST Goods CEO, in a statement. The company says it’s “pushing the boundaries of what’s always been done because it knows we all need to do better. We’re thrilled to be taking steps in the right direction alongside NCL.”

While decisions to eliminate plastics like Norwegian and Virgin can accelerate the travel industry toward a more environmentally friendly approach, these moves are also more tangible and visual in the eyes of consumers.

But environmentalists claim that isn’t enough.

“Any step you take is tangentially a good thing as long as you don’t stop and say, ‘that’s our contribution,'” said Andrew Rosenberg, a marine biologist with the Union of Concerned Scientists, a nonprofit that advocates for science and research to help solve global issues.

“Cruise ships are basically floating cities; they produce an enormous amount of waste … often in beautiful places with sensitive environments,” said Rosenberg. “On a 10-point scale, single-use plastics are a 2, pollution is a 10.”

“Their business depends on having a beautiful environment,” said Rosenberg. “They should be pushing the envelope with sustainability, not taking baby steps.”

“I will put what we do in recycling against any land-based facility I have ever seen. I’ll take you to our garbage room any day of the week to show you what we’re doing,” Stuart said, who also pointed toward Norwegian’s investment in wastewater treatment and exhaust cleaning systems.

“I’m proud of what we do as a company. We are pushing the limits of what’s possible today and we’re not looking at regulations saying, ‘how can I meet that?’ We’re looking at what’s possible and how can we achieve that? Those are two very different goals for a company to have in the world of sustainability,” Stuart said.