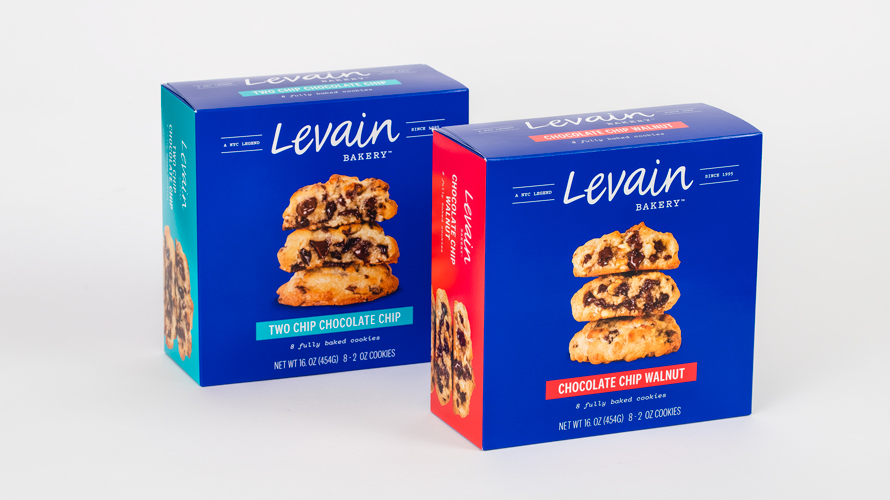 One-pound boxes of pre-baked cookies will be available in four flavors. - Credit by Kate Previte/Levain

The brand says it will maintain the quality of its four flavors—chocolate chip walnut, two-chip chocolate chip, dark chocolate peanut butter chip and oatmeal raisin—by selling the products precooked in the frozen aisle.

The bakery was founded in 1995 as a bread shop and has since grown to seven locations in the city. This shift to grocery sales comes after growth equity group Stripes became the majority owner of the brand, and is part of a larger movement to go nationwide within the next year or two. Grocery sales will begin in the New York City area and New England, with national distribution planned for the coming months.

Connie McDonald and Pam Weekes, founders of Levain Bakery, said in a statement that the brand has been looking to expand into wider distribution for years, but wanted to perfect the recipe to give shoppers the same experience at home as they get in stores. The frozen treats will be ready-to-eat after five minutes in the oven or toaster, without any preservatives or additives.

“As we considered expanding our reach beyond our own retail locations, it was vital that we created a full sensory experience that would invite people into the brand rather than dilute it,” said Andy Taylor, CEO of Levain Bakery.

CMO Rachel Porges said the brand is aiming to bring the same joy customers feel in its stores to cookie lovers around the country.

“Nothing can replace the Instagram-worthy moment of breaking open a ginormous cookie at one of our original bakeries,” she said. “But now having a bite of the Levain Bakery experience won’t require a trip to NYC.”

Levain Bakery is bringing that in-person experience to new locations, too. Next month, it’s launching its first location outside of the city in Washington, D.C., and this holiday season, it’s expanding its gift cookie box delivery.

These past few months have seen a slew of new CPG expansions, some prompted by the pandemic and others accelerated by it. Cheetos released a line of mac ‘n cheese products, Coca Cola is bringing its coffee-infused soda to the United States, and upstart yogurt brand Lavva took advantage of increased demand to grow its product line.