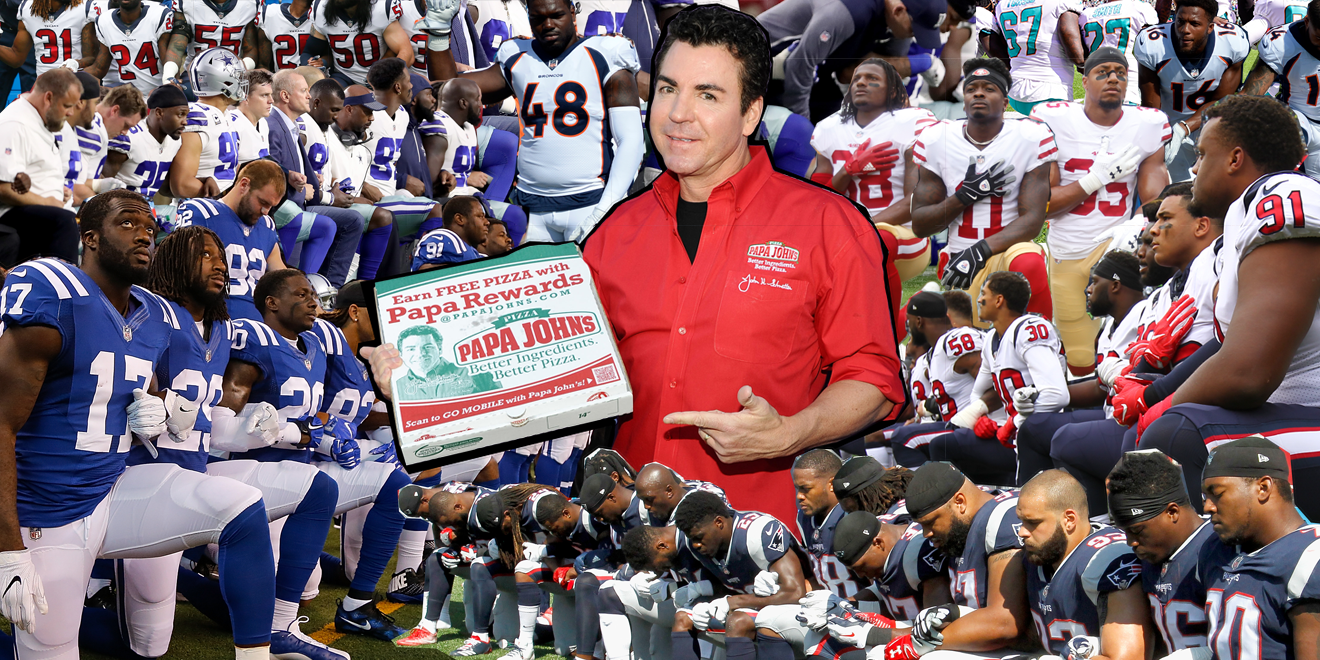 Papa John’s stepped into the middle of one of the most contentious topics in America this week when CEO John Schnatter blamed the company’s disappointing quarterly earnings on NFL leadership failing to curtail protests by players choosing to kneel during the national anthem.

“The NFL has hurt us by not resolving the current debacle. The controversy is polarizing the customer, polarizing the country,” Schnatter said, and social media immediately split into two camps: those supporting Schnatter’s statements and those criticizing him, along with the requisite calls for boycotts.

Global CMO Brandon Rhoten, who joined Papa John’s in May after a stint at Wendy’s, told Adweek the challenger chain’s move to re-evaluate its relationship with the league has nothing to do with President Trump’s recent decision to turn the protests into a partisan litmus test.

“We have not talked to the league about any of the the protest issues,” said Rhoten. “This isn’t a political thing for us at all. We just want the NFL to be as strong as it can be.”

Schnatter has not shied away from politics in the past. He openly supported Trump in last year’s election and stated in 2012 that the Affordable Care Act’s insurance mandate would raise the price of pizza. While Papa John’s has largely declined to directly address Schnatter’s most recent comments, it did confirm plans to drop the NFL shield and the “official sponsor” label from its ads.

“Ultimately, we don’t want to remove the designation,” Rhoten said, “but we see things like open rates, emails and customer sentiment. And we have to respond to that. We are still running ads [during NFL games], but we are picking and choosing where we put our investments now to optimize for return.”

CBS chairman Leslie Moonves and Greg Creed, CEO of Pizza Hut parent company Yum! Brands, both countered Schnatter’s statements this week by claiming that the protests have not hurt sales of ads or pizzas.

“I don’t know of one sponsor that has pulled out of any spot that they had. I don’t think it’s affecting advertising or their desire one iota,” said Moonves during his company’s earnings call. According to Business Insider, Creed also told investors the chain “wasn’t seeing any impact from the controversy on its business.”

But Rhoten, who also announced in a series of tweets this week that Papa John’s had chosen Laundry Service as its new agency of record, said his company’s relationship with the league is more strategically important than those of larger brands like Pizza Hut and Domino’s.

“The NFL [accounts for] the majority of our marketing spend for fall. … It’s still the largest prime-time TV show there is,” he said. Noting that Pizza Hut’s overall marketing budget dwarfs that of Papa John’s, Rhoten added, “Other companies are not going to feel the same effect we feel. Our brand is very much associated with the NFL. We have the shield, and no other company does.”

Both Rhoten and president and chief operating officer Steve Ritchie tried to distance the company from any one political stance.

“We’re a brand of over 100,000 employees with lots of diversity,” the CMO said. “We don’t represent one political view or another. We make pizzas.”

Twenty-year veteran Ritchie added, “The most unique thing about Papa John’s brand is not the product—it’s the culture. Mutual respect, diversity and inclusion … that’s been the key to our success, and we’ve had 14 consecutive years of sales growth.”

Wendy’s was well known to engage with fans and critics alike on social media during Rhoten’s tenure, but so far, the conversation surrounding Papa John’s has been dominated by users and competitors like DiGiorno, which teased the brand in a series of tweets.

“This organization doesn’t represent some of the views being pushed out there right now, and I think that will become clear as we move forward,” Rhoten said. He noted that his team is currently building Papa John’s digital marketing infrastructure so the brand can more actively engage with communities.

Rhoten also said he is considering other venues to diversify the company’s marketing spending, noting that he wants to “make sure we have more agility moving forward” but does not “anticipate any significant changes” to Papa John’s partnership with the NFL, which he called “amazing.”

“As our team experiments and learns, you’re going to see our brand change a lot, just like you saw Wendy’s change a lot,” he said.

According to Forbes, Schnatter’s comments have proven expensive for Papa John’s. On Wednesday, the outlet reported that the CEO had lost approximately $70 million in net worth over a period of less than 24 hours.