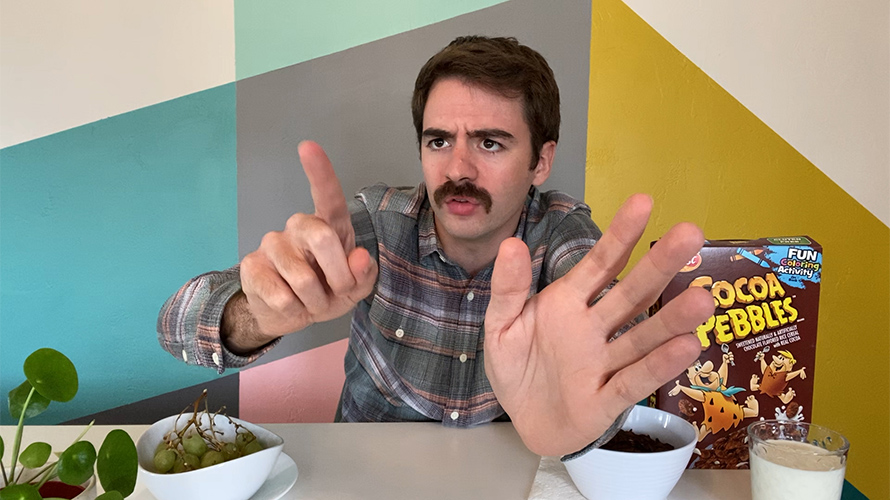 The series is scheduled to run for 30 days with a new video demonstrating a unique skill uploaded daily. - Credit by Courtesy of Post

With parents and children stuck together at home and plenty of creatives out of work due to the Covid-19 outbreak, Pebbles cereal is offering a way to help people make it through the day.

The brand recently introduced an educational web series titled “Daily Yabba Dabba Doo,” in which magicians, dancers, comedians and artists of all sorts teach kids new skills, such as how to mimic the sound of a loon or say, “You’re beautiful” in sign language. All the activities taught are suitable for the indoors and don’t require anything beyond common items found around the home.

Cereal boxes, of course, have a long history of including mazes, crosswords and puzzles on their packaging—anything to keep a kid occupied and encourage them to remain still during their meal.

“In a way, this is kind of the evolution of the back of the box,” said Brian Hurley, creative lead from Public Works, Pebbles’ creative agency of record.

The project came together in just over a week, according to Hurley, and the team is working about three or four days in advance, meeting each morning to go over video submissions and reach out to more potential contributors.

The Post Consumer Brands-owned Pebbles cereal, best known for its fruity and cocoa flavors featuring images of Fred Flintstone and Barney Rubble, is paying each video creator $1,500—a number the company arrived at after evaluating the monthly U.S. median housing cost.

“It’s our way of showing up for families and for artists and creators during the difficult time,” said Amy Brothers, Pebbles’ brand manager.

With schools and daycares closed, parents have their hands full being substitute teachers while trying to focus on their own work, too. Part of the idea behind the series was to help give mom and dad a break. “If we teach my [6-year-old daughter] a simple magic trick, that will occupy her mind and her creativity for a better part of the day,” said Hurley.

In a sense, Pebbles’ step-by-step instructional series is an extension of what the brand has already been doing online in terms of trying to encourage fun and creativity through arts and crafts. On its website, for example, the brand shows readers how to turn a Pebbles cereal box into a guitar. Another page explains how to transform the box into a pinhole projector to watch a solar eclipse.

The Daily Yabba Dabba Doo is scheduled to run for 30 days with a new video demonstrating a unique talent uploaded to Facebook, Instagram and Pebbles’ website each day. Each video is between two and four minutes long and is released at 6 a.m. ET with the idea that families can watch them during breakfast.

Join the foremost brand marketers, such as Marc Pritchard of P&G, Brad Hiranaga of General Mills, Kory Marchisotto of e.l.f. and more, for Brandweek Masters Live on Sept. 14-17. Secure your pass today. Early-bird rates expire 9/1.
@hiebertpaul paul.hiebert@adweek.com Paul Hiebert is a CPG reporter at Adweek, where he focuses on data-driven stories that help illustrate changes in consumer behavior and sentiment.