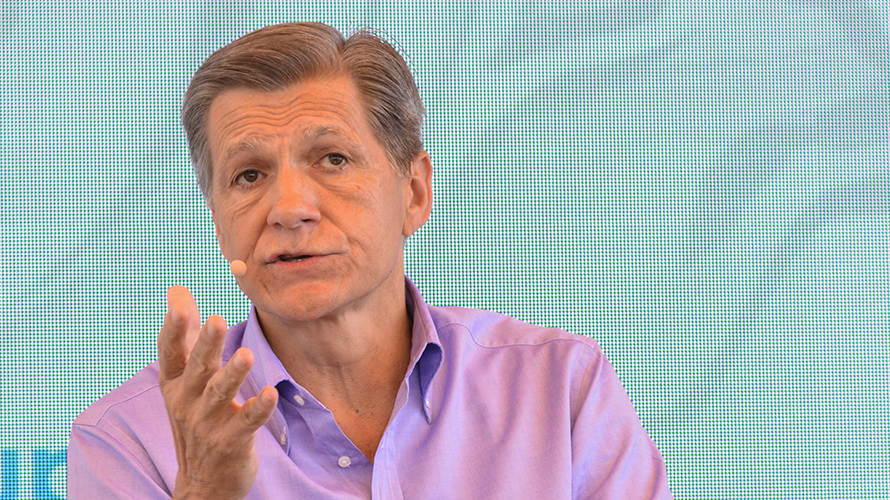 Procter & Gamble’s chief brand officer has spent the past 10 months arguing against waste in the digital ad space. The problem isn’t just that those ads can be wasteful—only 25 percent of digital ad spend reaches consumers, according to the Association of National Advertisers—but that they aren’t growing brands.

Pritchard revealed the steps P&G has taken to retool how it works in the digital space, focusing on transparency, ad quality, mass one-to-one marketing (i.e., serving you ads when it makes sense—if you’ve bought an electric Oral-B toothbrush via Amazon, P&G knows to serve you an ad for a refill six months later), and messages for good. By revamping its approach, Pritchard argued, P&G and brand marketers in general can grow.

As for transparency, Pritchard said P&G, in partnership with the ANA and the Interactive Advertising Bureau, is “adopting one viewability standard so we know whether an ad has the chance to be seen; getting third-party, accredited measurement verification so we know we’re reaching the audience we paid for; demanding transparent agency contracts so we know what our agencies do with our money; eliminating fraud so we know humans see our ads, not robots; ensuring brand safety so we know our ads show up in the right place, not in a terrorist video.”

Pritchard said the company is “about two-thirds complete on these steps today and should be largely finished by the end of 2017.”

“These are commonsense steps, long overdue and necessary for a clean and productive media supply chain,” he said. “The consequences are clear for those who don’t comply. We will vote with our dollars and will not waste our money on a crappy media supply chain so we can invest in what really matters—better advertising and innovation to drive growth.”

Now, P&G only works with roughly 200 “trusted and proven-clean media partners to cut off the bot-laden long tail,” Pritchard said.

The company has also realized that putting 30-second spots in the digital space or, “treating it like another form of TV,” didn’t make any sense, Pritchard said.

“The data now shows that the average ad-viewing time can be as low as 1.7 seconds, pretty much a blink of an eye, with only 20 percent of ads viewed for more than two seconds, the minimum standard,” he said. “We stopped wasting money on 30-second ads [for digital], and we’re designing ads to work in two seconds.”

The company also  found it was “reaching too few people too many times with too many ads,” Pritchard said. “Excess frequency is a massive source of waste, and it really annoys consumers. No wonder ad blockers are growing 20 percent a year. I mean, how many times does a person need to see a toilet paper ad to get the point?”

He said the company is tackling the problem of excess frequency “with programmatic buying, serving ads when they’re most receptive and capping how often they see it.”

“We’re also working with ecommerce players like Amazon and Alibaba to use unique ID data to reach consumers closer to when they’re ready to buy,” Pritchard said. “This is accelerating our $3 billion ecommerce business and cutting waste by 20 percent. But most important, it’s creating a better consumer ad.”

As for brand safety, P&G cut between $100 million and $140 million in digital ad spend last March. Doing so made the brand take a broader look at what it was doing with spots online.

“There’s no question ads should never be on an ISIS recruiting video,” Pritchard said. “But really, how many cat videos should we advertise on? If you’re watching cat videos, do you really want to see a toothpaste ad? So the conversation is shifting from brand safety to raising the bar on quality media content.”

P&G has been working with YouTube to find channels that are “100 percent safe and far more engaging,” noted Pritchard. It is also working with Facebook, Snap, Twitter and Tencent “to elevate the quality of content.”