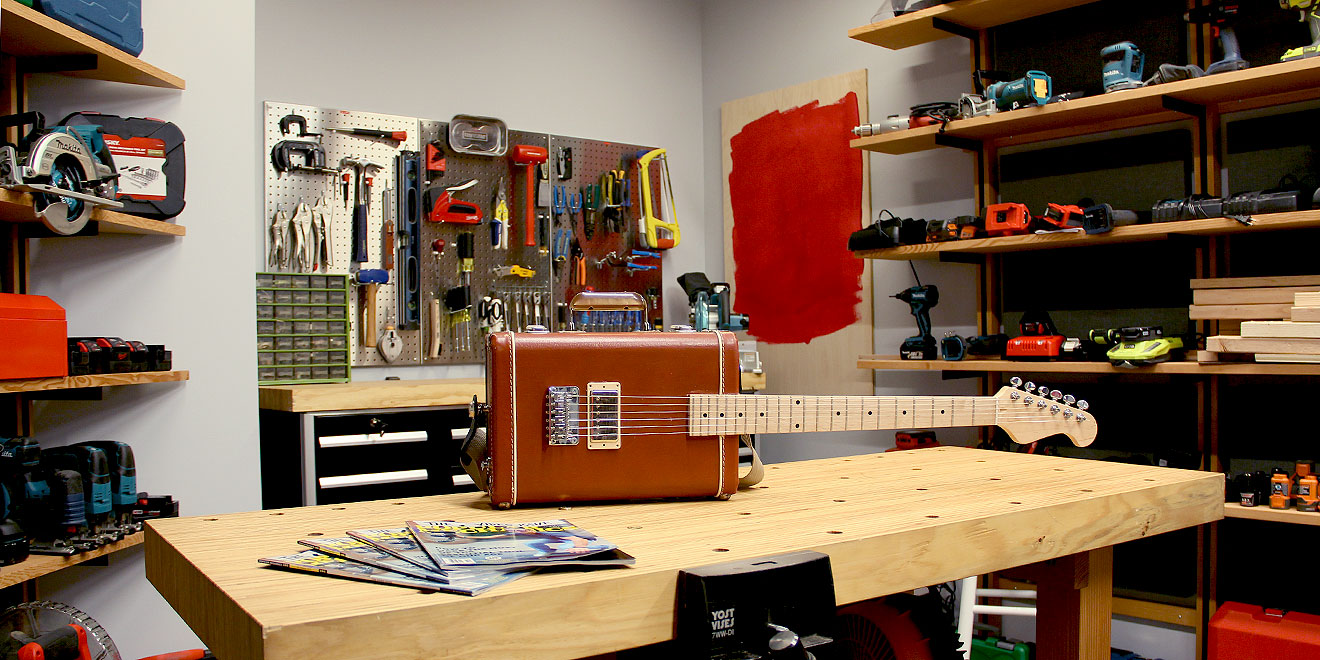 The workshop is equipped for most any project, including this recent one-off, a guitar that research editor Henry Robertson made from a clarinet case. Photo: Yuliya Kim

Five days a week, the editorial staff of Popular Mechanics magazine reports to work on the 23rd floor of Hearst Tower, a 46-story diagrid of stainless steel and low-E glass designed by Norman Foster and honored with LEED platinum certification. And inside the hushed expanse of glass walls, where high-tech AC equipment uses outside air to cool the space, it is a strange thing indeed to hear the sounds of hammering and sawing, power tools and a Shop-Vac breaking the calm from the other side of a door near the building’s northwest corner. What are the sounds of a suburban garage doing in a rarified spot like this?

Well, you might call them the sounds of a brand being extended.

The cry of power tools is coming from The Shop at Popular Mechanics, which the magazine is officially unveiling today. The 12-by-21-foot space that was formerly a storage closet will serve as the magazine’s in-house content studio, allowing the editorial staff—specifically, senior home editor Roy Berendsohn, keeper of the popular “Ask Roy” column—to test new tools, develop fix-it projects and produce short, instructive video content for online consumption.

“We wanted a space that was set up to do a range of product testing and product integration,” said Popular Mechanics publisher Cameron Connors. “It’s a multifunction space, and we’re pleased with the outcome. Hearst has its own media production capabilities, but this is very specific to our brand.” 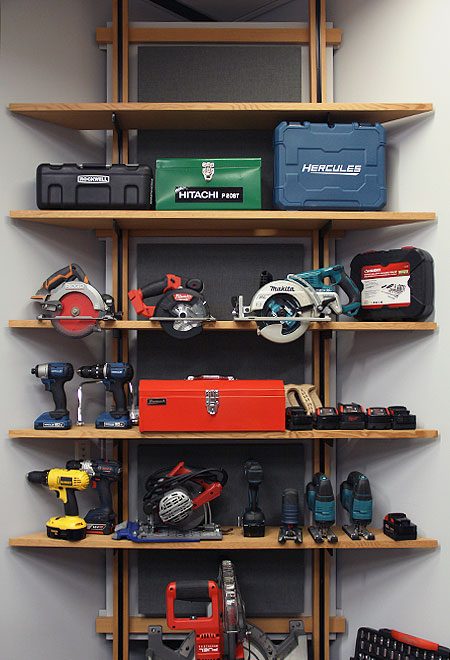 For 115 years, Popular Mechanics has served a do-it-yourself audience with articles that knit together a keen interest in futuristic technology with the practical imperatives of fixing stuff in the garage. The problem, unbeknownst to most readers, is that the magazine didn’t have a garage to tinker in, as editor in chief Ryan D’Agostino admitted.

“It’s hard to be the magazine of doers when you’re on the 23rd floor of an office tower,” he joked recently, leading a visiting reporter on an impromptu tour of the workshop one morning. “It’s good to have a space to play around and get your hands dirty.”

With its butcher-block workbenches on wheels, gleaming ratchet sets and metal drawers brimming with screwdrivers, clamps and vise-grips, the workshop looks ready to take on just about any project. How dirty one’s hands might get is debatable, since the space is spotless, a function in part of the industrial Shop-Vac bolted to the wall.

“This is a car dealership floor,” Berendsohn said, tapping his foot approvingly on the checkerboard of rubber-based tile. “You can drive on it.”

Shelves line the walls on two sides, heavy with routers and saws and power sanders from a host of name-brand tool manufacturers.

The three videos produced thus far—scroll to the bottom to watch them—have all prominently featured name-brand products like a DeWalt cordless drill and a Bosch laser level. Not only can these tools be purchased at Home Depot, the videos also spotlight Home Depot store brands like Husky, which makes tool sets and other must-have stuff for the weekend warrior.

Product placement aside, however, Home Depot’s marketing manager for tools and hardware Jeffrey Clifford said that video like this provides retailers with a far more compelling way to draw customers’ attention than just another commercial.

“Through our partnership with Popular Mechanics, we’ve put the focus on enabling the consumer versus just going to market with a sales message,” Clifford said. “We understand consumers prefer nonbranded content, and we believe this is a great opportunity to educate and motivate both DIY and auto DIY segments.” 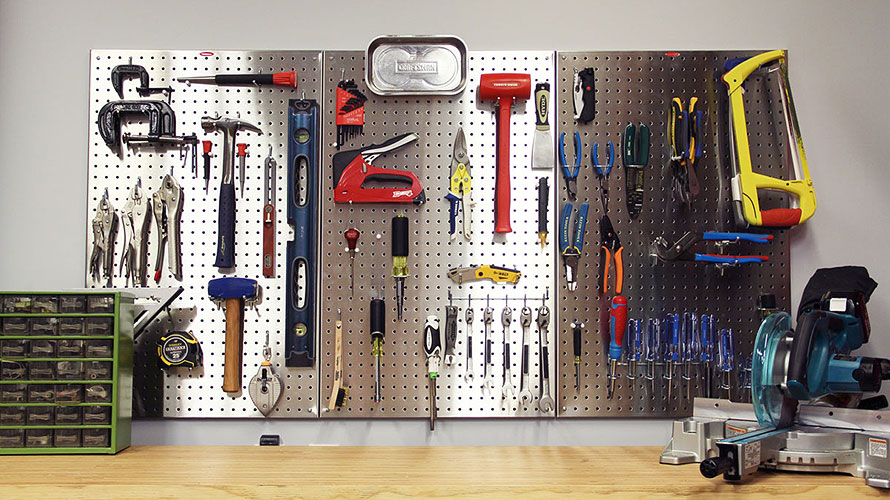 For Popular Mechanics, which is coming out with a special video issue in October, online video is foremost a way to extend a legacy print brand into more digital platforms. Apart from posting its videos on its website, the magazine will shoot in the workshop for Facebook Live and Instagram. But video for video’s sake isn’t enough to win the attention Popular Mechanics hopes to get. By shooting on-site under the auspices of a highly respected editor—Berendsohn has been with the magazine nearly three decades—the content has authenticity. Keeping the topics short and oriented toward the how-to should also make them more sharable, or so the reasoning goes.

“Video is a hot topic across the media landscape,” Connors said. “We as a brand want to make sure we’re getting into this space in an authentic way, and what’s more authentic than building our own studio? Who can do it better than us?”

At the same time, video presents its own set of editorial challenges for the magazine. Connors said topics must “ride that line” between what is “actionable” and what is “sharable.” They need to be practical enough to draw the handyman or woman’s attention, informative enough to hold that attention and short enough not to lose it.

“You have that brief moment in time to capture their attention, interest them to watch and not overwhelm them with too many steps,” Connors said. Thus far, the magazine has tried to keep each project under 10 steps.

An added challenge, D’Agostino said, is appealing to younger consumers who want to be handy around the house but lack the sort of skinned-knuckle childhoods more common among members of previous generations.

“We want to encourage them so they’re not afraid to do what their parents and grandparents did,” D’Agostino said. The videos, he hopes, will tap into an innate “thirst for wanting to work with your hands. This [workshop] allows us to work with that idea and serve an audience in a more nimble way.”

Meanwhile, Berendsohn, who comes in early every morning, now has a dedicated room in which he can work.

“Manufacturers send us stuff, and there’s finally a place to go and work with it,” he said. “I can shut the door and saw and drill and grind.”

Fortunately for the editorial staff sitting outside, the new workshop has one other impressive high-tech component: soundproofing.