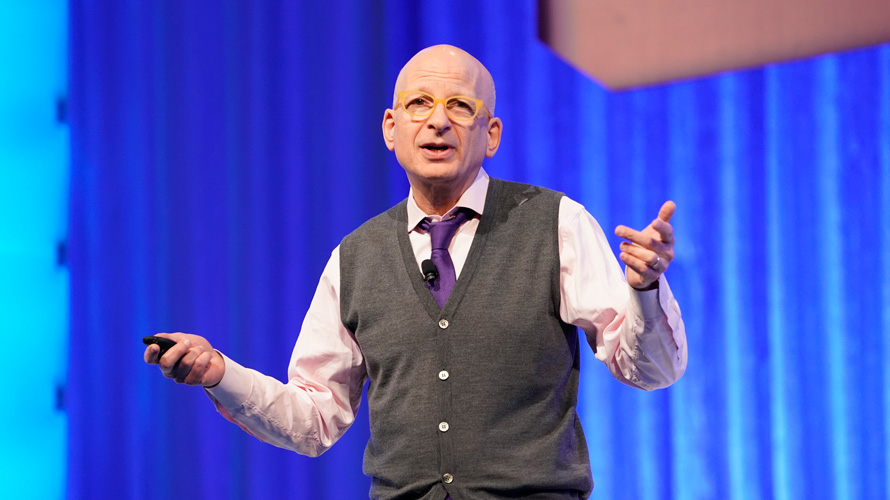 Seth Godin is a bestselling author and entrepreneur. He also runs an online course that helps marketers learn by doing, which has resonated with many industry professionals over the years.

Godin joined us on a bonus episode of Adweek’s Yeah, That’s Probably an Ad podcast to talk about how marketers can do their jobs better.

This Q&A has been edited for length. Listen to the full interview in the podcast embedded below.

I’m curious about your process and what’s top of mind now?
Godin: My process has always been the same. I don’t believe everything happens for a reason. I think that everything happens, and then we make up a reason; but in the marketplace, in our culture, there tends to be reliable reasons, causes, effects that we can predict based on how something works or doesn’t work.

So if I see something in the world and I don’t understand why it’s working, I need to come up with another way to explain culture. Like, why is it that people are waiting in line to buy a Supreme hoodie for $250? If I can’t explain it, then I’m walking around thinking that everything is just magical. And it’s not. What we have is the sum total of how human beings behave. And our job as marketers is to help figure that out.

How does one learn to ride a bike in the marketing world?
So the altMBA is our flagship; there’s no videos in it. All it is: small groups of people, five are at a time in a cohort of 120, with alumni coaches taking them through 14 prompts. And in the course of a month, they’ll give and get hundreds of pieces of feedback, more feedback than they’ve gotten in their entire career.

And what you do when you work through a prompt is you practice making assertions. You learn to make decisions, you learn to go faster, you learn to see and be seen. And that’s a deep emotional shift for most people who have a job because it is not about compliance. It’s about leadership. And leadership isn’t the same as management. Leadership is voluntary. Leadership involves pathfinding, figuring out where to go next.

But the reason it works is because then we say, ‘Alright, take this idea and apply it to your work,’ what happens is that people start workshopping their marketing in front of their peers. And too often, we hesitate to do that because we’re afraid. And so you’ve got all the people on Madison Avenue, who have a lot of bluster because they’re afraid to talk about why a campaign might or might not work. So they simply pretend it’s magic.

It’s really about communication and practice when the opportunity comes up at your job.
That didn’t used to be the case. What you were supposed to do in your job in the old days was what your boss wanted. And this hierarchical industrial approach goes all the way back to the magic of Mad Men and Bewitched and all the things that we think we’re supposed to do as marketers or people at agencies, etc.

But that’s gone. That the depth of the hierarchy, even at the giant Unilevers and Procter & Gambles, the hierarchy’s gone from 11 people from the top to the bottom to, like, three, which means that everyone who’s on the team has to contribute way more initiative and insight than they used to.

You also say one of the goals is to work faster. That’s changed. Is practicing riding a bike going to make you ride faster?
At my first job, my boss used to be on at Frito-Lay. And he told us that he had spent a year on the redesign of the Lay’s potato chip bag. Now, it’s probably true that there are still people who are spending a year redesigning the container for Oreos or whatever, but not most of us. Most of us are moving way faster than that, because the cost of being wrong is lower than ever before. And the need for fast feedback is more than ever before. So I believe that most of the time, we’re going slow.

We’re going slow because we have to go to more meetings. And we’re going slow because we’re waiting for someone else to take responsibility. And so the skill that you learn isn’t just the skill of, ‘I can ride a bike.’ It’s the skill of being willing to fall down. It’s the skill of being open to trying a different way to be in the world. And what we see among big companies that are faltering when technology in the culture changes is they’re not faltering because they’re dumb. They’re faltering because they’re afraid.

It’s gotten more selfish, a lot more selfish. And we justify it by talking about the competition: ‘If I don’t cut corners, someone else will. If I don’t race to the bottom, somebody else will. If I don’t ask for better terms, or if I don’t mislead people, someone else will.’ And we are seeing one industry after another suffering the consequences of racing to the bottom, that if you’re in the financial services business and all you can do is the kind of shenanigans that Wells Fargo did.

"What we get to do is make promises and keep them. That is the thrilling part of being a marketer, because we're choosing to lean outside of the established industrial standard."
Seth Godin, Author and entrepreneur
@koimtv ko.im@adweek.com Ko Im is the community editor at Adweek and co-host of Adweek's podcast Yeah, That's Probably an Ad.