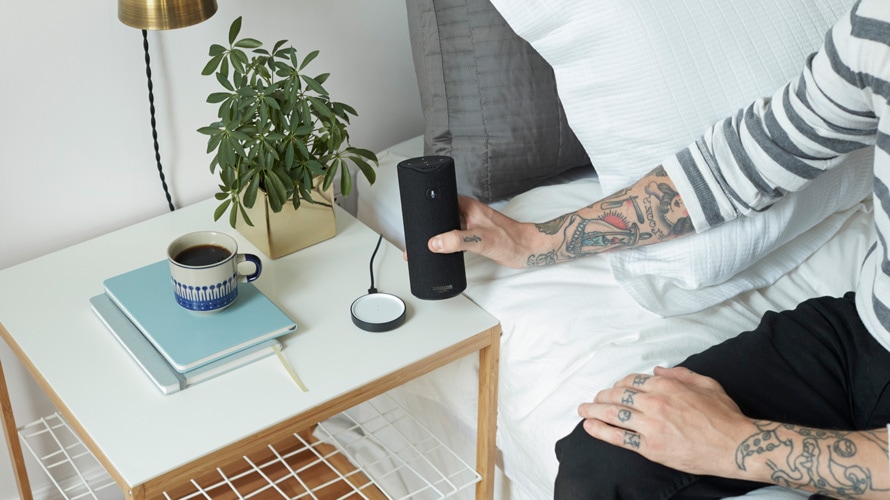 A recent lawsuit questions the legality around whether or not Alexa is recording child users. - Credit by Amazon

Editor’s note: Industry consultant Shelly Palmer is taking his popular newsletter and turning it into an Adweek article once per week in an ongoing column titled “Think About This.”

The recently filed lawsuit against Amazon’s Alexa Voice Services fascinates me. It alleges that Amazon is recording children who use Alexa without appropriate consent. It’s a legal technicality. Even though mom or dad bought the Echo, put it in the house and taught the kids to talk to it, Washington and several other states require dual-party consent to record a conversation.

A quick fix would be for Amazon to build the required consent language into the terms and conditions for using Alexa. Except by doing so, Amazon would have to admit that Alexa is recording conversations.

This raises the question: Is Alexa recording conversations? And even if it isn’t, do these lawyers believe that there actually is someone listening or reading the commands and that the data collection methodology is somehow different from giving a 10-year-old a smartphone or tablet and letting the child play a game on it?

Willful ignorance is dangerous, but not understanding the difference between data privacy and digital is way more dangerous.

Data privacy is currently an undefined, vague notion of the value and usefulness of someone’s personal data. Data privacy advocates are calling for strict regulatory frameworks to protect people from third parties who might benefit from aggregating and enriching their digital profiles. It is a fool’s errand.

As long as people are addicted to publishing personal information or remain willing to give away their usage data to enhance the quality of their online enjoyment, the quest for data privacy is an iterative game of Whack-a-Mole.

Conversely, digital identity advocates suggest a clearly defined methodology that authenticates your identity and allows you to control who sees your data and how it should be used.

Willful ignorance is dangerous, but not understanding the difference between data privacy and digital is way more dangerous.
For example, a minor with a fully authenticated digital ID could not open an account on a site that was prohibited by law from allowing minors to open accounts. This would not require the transfer of personal information; simply checking the ID against an anonymized database would allow compliance with the law without the exchange of personal data.

To be clear, there is a fierce academic debate as to which approach might be a better solution. But it seems obvious that removing the ability to easily create fake accounts, ensuring that people are who they say they are and holding people accountable for their online actions as we hold them accountable for their offline actions would go a long way toward solving the problem.

How does my Echo device work?

With this framework, it helps to know that Amazon says Echo devices do not store recordings; instead, it uses automatic speech recognition (ASR) to determine what has been said, analyze the text with a natural language understanding AI and do its best to act on the input. The text is then stored on Amazon’s cloud and displayed in your Alexa app’s history stack.

Amazon insists that no audio is sent or saved to the cloud unless your Echo hears the wake word (i.e., “Alexa,” “Echo,” “Amazon” or “Computer,” for Star Trek fans).

Earlier this year, Bloomberg found otherwise, reporting that Amazon employees were listening to what you were saying via Alexa and transcribing your speech to help make the service better. And while Amazon says no audio is stored unless Echo hears its wake word, Amazon employees said they’d routinely hear and transcribe audio recorded by Alexa “without any prompt at all.”

The heart of the lawsuit

As the Seattle lawsuit claims, since the Alexa system can identify individual speakers based on their voices, despite being inadequate at the moment, Amazon could ask any new user speaking to the Echo for consent.

“But Alexa does not do this,” the lawsuit claims. “At no point does Amazon warn unregistered users that it is creating persistent voice recordings of their Alexa interactions, let alone obtain their consent to do so.”

The problem is not data privacy; the problem is digital identity.
@shellypalmer Shelly Palmer is CEO of The Palmer Group, a strategic advisory, technology solutions and business development practice focused at the nexus of media and marketing with a special emphasis on machine learning and data-driven decision-making.