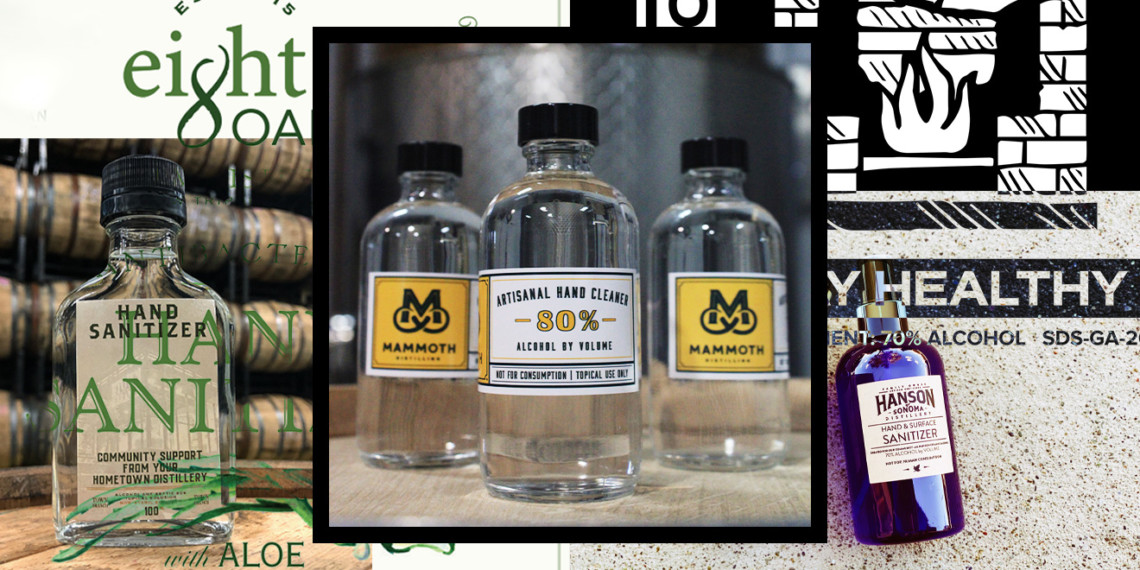 By churning out hand sanitizer, distilleries are doing good—and many are doing some clever branding while they’re at it. - Credit by Mammoth, Old Fourth, Hanson of Sonoma, Eight Oaks, Lexington

Last year, the family-owned distillery Mammoth decided to invest several thousand dollars in a professional roll printer so it could make labels at its home office in Central Lake, Mich. Mammoth runs three tasting rooms and makes a full line of rye, bourbon, vodka and gin, so it already has a standing contract with a high-volume label producer. The in-house machine was just for the select runs of 100 bottles or fewer. CMO Mark Scheer figured that would be all the use the pricy machine would see.

Then COVID-19 blew into town.

Like many distilleries across the country, Mammoth made the overnight decision to do its part for the community and switch its production to making hand sanitizer, a commodity the pandemic has rendered rare and precious. But instead of just funneling the product into bottles and getting it out the door, Mammoth’s distiller, Collin Gaudard (who also happens to be a visual artist), sat down and designed an elegant label—one whose panache matches the ones customers usually see on the brand’s $45 bottles of whiskey. Mammoth’s new printer turned out crisp, glossy rolls of Gaudard’s labels, which in turn went onto retro glass bottles with black screw caps.

The resulting “artisanal hand cleaners” are chic enough to be part of a luxury skincare line sold at Neiman Marcus, but Mammoth is giving most of it to front-line workers for nothing.

“If we have an opportunity to distribute a product widely, putting our brand on it is an investment that pays off in six months when everything is normal again,” Scheer said. “We hope our brand resonated at a time that was difficult. [And then] in the future, hopefully, we’ll reap the benefit of that.”

Mammoth is among the overnight sanitizer-makers to have recognized a small but potentially important truth about business during COVID-19: Daily routines might have stopped, but branding never does. And a little extra effort poured into package design now not only keeps a brand’s image consistent but will quite possibly create a lasting impression that leads to better business later on.

“Many of these brands are finding clever design strategies to connect to the quarantined world,” said Chris Lowery, CEO and chief strategist of Chase Design Group, whose clients include Nestle, Starbucks and Coca-Cola. “Apothecary cues and trend-driven graphic treatments will connect with younger consumers, making it cool to carry hand sanitizer and increasing the prevalence of clean-touch practices. This is an amazing way to use your brand’s reach to make a difference that matters.”

Below, an assortment of makeshift hand sanitizers whose parent brands applied a bit of elbow grease to make the packaging impactful and memorable. 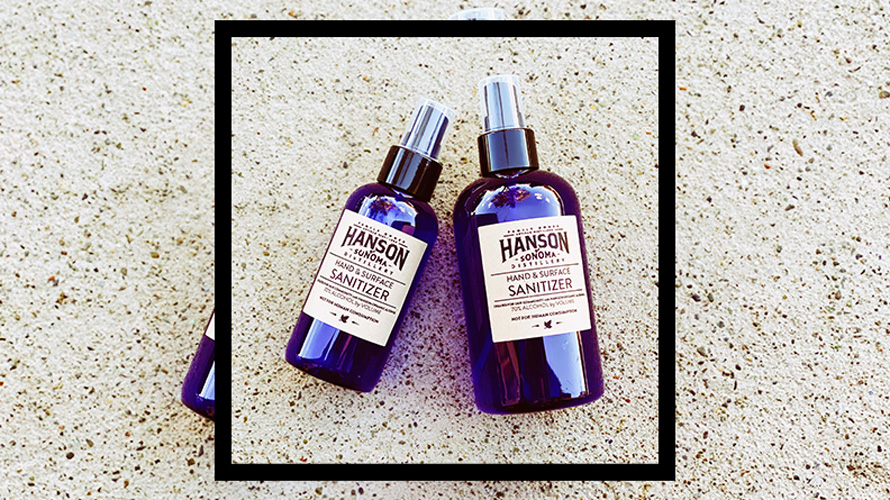 The Hanson family’s eponymous line of organic whiskey and vodka has won accolades from O, The Oprah Magazine to Chef Alice Waters. But once California became a COVID-19 hot spot, the distillery started producing these hand sanitizers in cobalt-blue spray bottles with pulp labels reminiscent of the days of hand printing. “Things are moving very quickly as we convert our distillery from making vodka to hand sanitizers, so there wasn’t much time to spend on this,” marketing director Alanna Hanson told Adweek. “We pulled the labeling together in 10 minutes. Even so, we wanted the product to reflect who we are and also believe it’s important to find beauty in everything you do—especially in stressful times. As a family, we come from a strong art and design background, so it was important to stay true to our brand and aesthetic.” 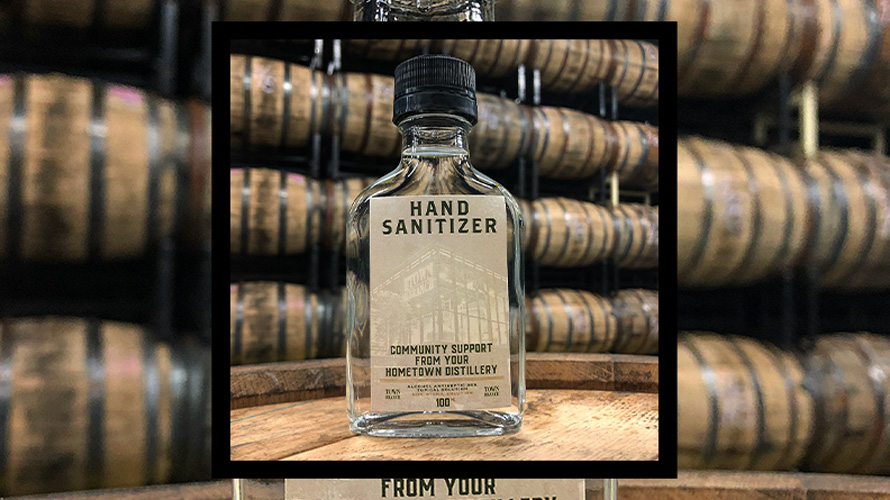 Part of Kentucky’s Lexington Brewing Company, the Town Branch Distillery produces a range of whiskeys, bourbons and, lately, a prodigious run of hand sanitizer. At press time, the distillery had fielded well over 1,025 individual requests for the stuff. The off-white paper label and its typeface match what consumers were already used to seeing on the liquor bottles, but Lexington added a ghosted photo of the distillery in the background, a subtle reminder that a local business is rising to the occasion.

“Legally, when producing this hand sanitizer, we have to include information about what is in the bottle, active ingredients and volume,” said marketing manager Pete Weiss. “Since we needed to create a label, we decided to make sure that the label fit with our other brands and make sure that it fit our brand personality.” 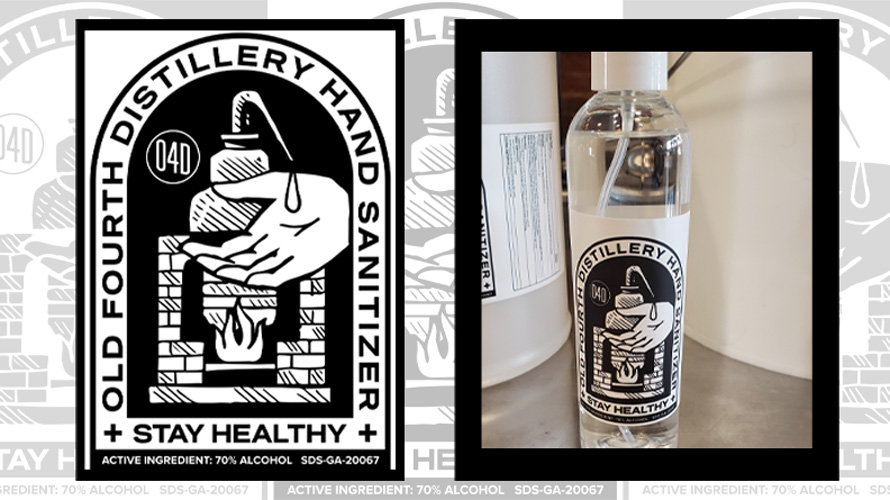 “If we’re going to get what now amounts to hundreds of thousands of bottles of this stuff out into the community, why not have a nice look to go with it?” said Craig Moore who, with his brother Jeff, owns Atlanta’s Old Fourth Distillery.

Since switching over to hand sanitizer production over two weeks ago, the downtown institution has supplied 10,000 gallons of sanitizer to the Georgia Emergency Management Agency and given much of its stock away to homeless shelters and at-risk populations.

Amid the crushing demand, however, Moore decided to sink some effort into making a brand impression. “Why not try to bolster the brand while we’re helping people?” he said. Local designer Bart Sasso produced the label, whose motif unites the distilling process with the importance of disinfecting your hands. 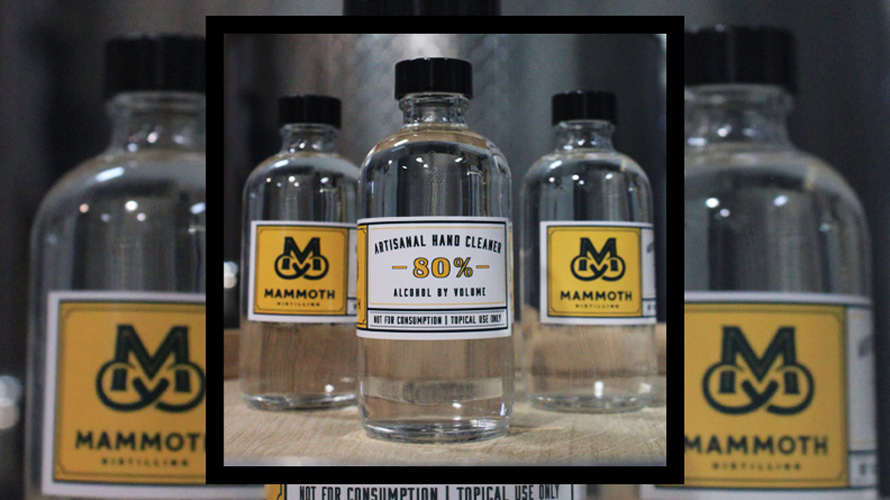 Mammoth wasn’t just lucky to have a distiller with a design background, it also had a huge stock of clear glass bottles on hand that it normally used for distributing liquor to institutions like hotels and golf courses. Coincidentally, these containers are reminiscent of old apothecary bottles, an effect that’s heightened by the nostalgic styling of the labels themselves. Aside from giving Mammoth a chance to do some good in the community and get his brand some exposure, the hand sanitizer production “was just fun,” Scheer said. “It gave us a creative outlet.” 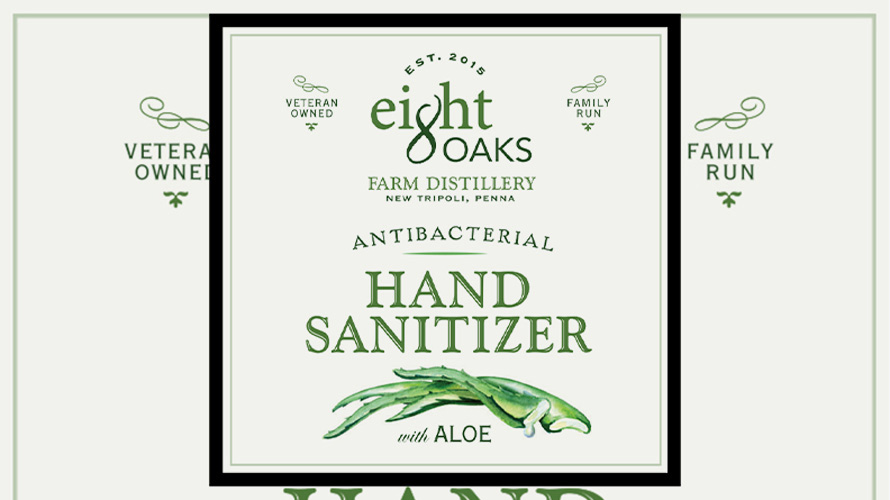 A craft distillery located deep in Pennsylvania’s Lehigh Valley, Eight Oaks takes its name from a family tradition. Founder Chad Butters’ grandfather used to sign his letters with a figure eight, which stood for the eight letters in “I love you.” So when the farm distillery switched over to hand sanitizer production, the number eight had to figure prominently in addition to other quality cues such as a light-green tint to the paper as a reminder that there’s aloe added to the mix. “For us, the look and feel of how we communicate who we are is important, and we wanted to make sure we stayed consistent with our audience,” Josh Van Den Berg, Eight Oaks’ chief brand officer, told Adweek. “We’ve worked hard to establish good relationships with them, so they know if something has the Eight Oaks Farm Distillery logo on it, they can trust it. In this case, it just happens to be sanitizer instead of whiskey.” 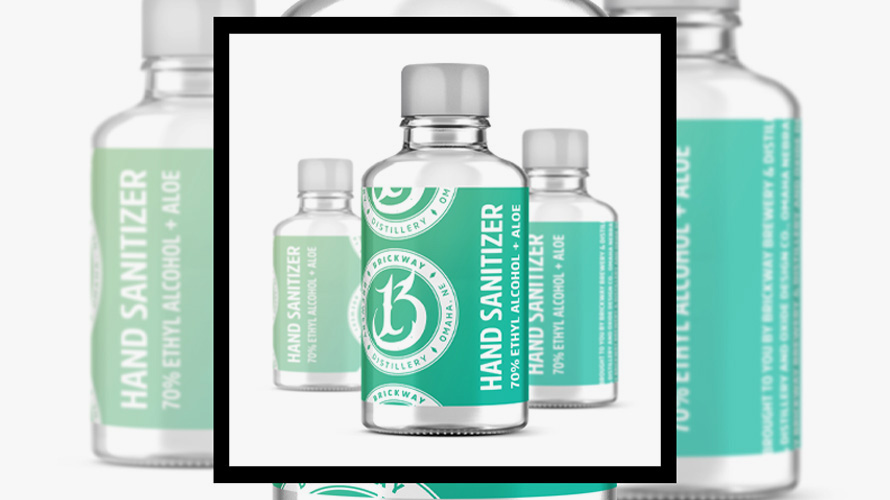 In 2013, pioneering entrepreneur Zac Triemert built the first new distillery in Omaha’s Old Market district since Prohibition. Last week, the brewmaster-distiller became a pioneer in another way: He shifted his production to hand sanitizer, not only to help first responders and other front-line workers, but to keep his employees on the payroll.

But while gearing up to produce the 10,000 bottles he hopes to ship in the next week or so, Triemert told Adweek, it was worth taking some extra time to create a distinctive-looking bottle.

Omaha-based Oxide Design whipped up a label gratis, and industrial label maker Palco printed them (also free of charge). “I believe that it is always important to be brand-on,” Trimert said. “That includes brand look [and] product quality.” Brickway’s sanitizers boast aloe and a few drops of lavender, too, just to leave a lasting olfactory impression. 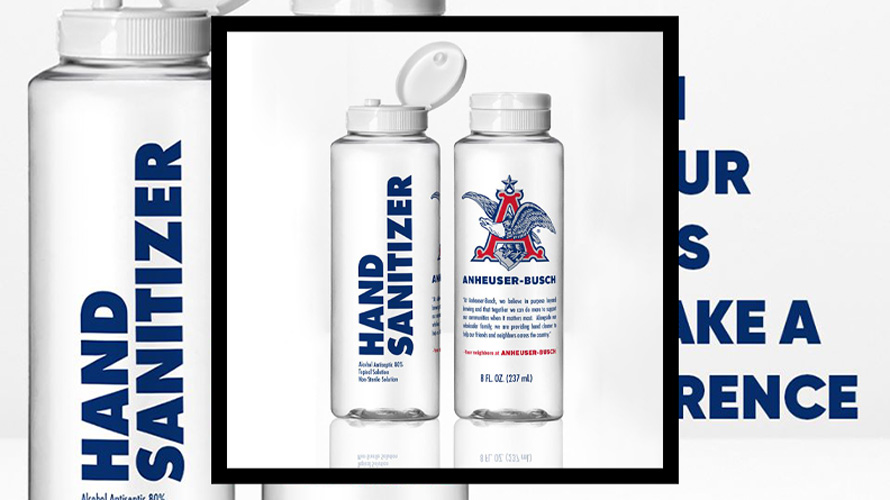 While sanitizer packaging panache has largely been the domain of mom-and-pop operations that theoretically have a bit more agility than multinational corporations, Anheuser-Busch not only quickly converted its massive plants in Baldwinsville, N.Y., and Van Nuys, Calif., to make sanitizer; it also produced a smart-looking container with equal speed. The clear-plastic, flip-top bottles feature a red, white and blue color scheme reminiscent of Budweiser cans and a bold, sans-serif typeface that makes it plain what’s inside. But the notable feature is the oversize A-and-eagle escutcheon, which the brand has used since 1872. “We included our iconic A-and-eagle emblem because we take pride in everything we make, whether it’s our high-quality beers, emergency drinking water or hand sanitizer for first responders on the front lines,” said Adam Warrington, vp, better world at Anheuser-Busch.