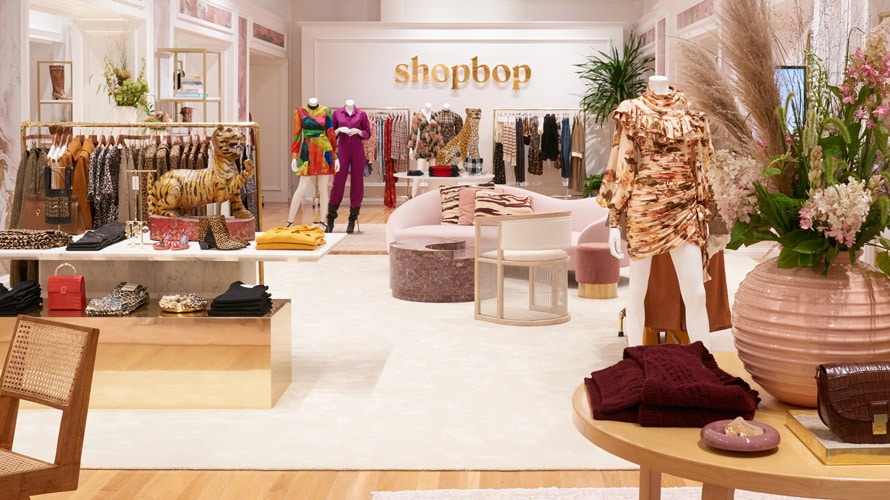 The store, settled on the corner of Mercer and Spring streets in Soho, opened on Friday. - Credit by Shopbop

Twenty years ago, a store called Bop opened its doors in Madison, Wis. Store founder Martha Graettinger thought the city’s residents—in particular, the students at the nearby University of Wisconsin, many of whom hailed from major metropolitan areas and outside the Midwest—were in need of a contemporary fashion boutique, according to The Badger Herald.

The store didn’t stay solely a college town boutique for long. Bop’s contemporary fashion and curated designer selection soon landed on a website aptly named Shopbop.com. Since then, Shopbop has exploded beyond what Bop’s founders could have originally predicted: It’s become a leading ecommerce destination for women’s fashion, competing with the likes of FarFetch, Net-a-Porter and Yoox. Acquired by Amazon in 2006, it has grown to carry over 1,000 designers and brands and is available for shoppers in 180 countries. That original store in Madison remained in operation until 2014, even if the majority of Shopbop’s worldwide customers didn’t know it existed. (Today, many of the brand’s operations are still headquartered in Madison, including fulfillment, customer service and technology.)

But for its 20th anniversary, Shopbop is returning to its brick and mortar roots with the opening of its first pop-up store in New York. The store, settled on the corner of Mercer and Spring streets in Soho, opened on Friday (which also happened to be the first day of New York Fashion Week) and runs through Sept. 22. It’s one of a number of efforts the store has launched for its milestone anniversary.

"It's important that we be where [our customer] is, whether that's through a digital channel, social channel or an experience in person. … It felt like the right moment to give that experience to our customer."
-Shopbop brand president Shira Suveyke
Of these celebrations, the pop-up is undoubtedly the most prominent. Shopbop brand president Shira Suveyke said the company wanted to do something big for the customer who made its 20th birthday possible. That customer, of course, will be attending New York Fashion Week in droves, and making this experience especially felt like “a natural thing, to celebrate this relationship that Shopbop has fostered with its customer,” explained Suveyke.

The pop-up also presents an opportunity for Shopbop to connect in-person with customers who have only ever experienced the brand online. Through the pop-up’s first weekend, jewelry designer Zoë Chicco hosted a “jewelry party” with engraving. On Saturday, Emma Grede, who co-founded denim brand Good American with Khloé Kardashian, hosted a Q&A. Shoppers can sign up for fitness and mediation classes that will occur in the space; parties with gifts from brands like Levi’s and Tory Burch; and styling sessions with fashion editors and members of Shopbop’s own team. For those who can’t make it in person, the pop-up’s product assortment will also exist in a standalone page online.

“We wanted to get closer to our customer,” said Suveyke. “It’s important that we be where she is, whether that’s through a digital channel, social channel or an experience in person. We knew that there was an opportunity to create this very customer-centric experience that would allow our customers to experience the Shopbop lifestyle in person, for us to be able to have a different dialogue with her through daily activations and programming, bringing her into our world in a different way. It felt like the right moment to give that experience to our customer.” 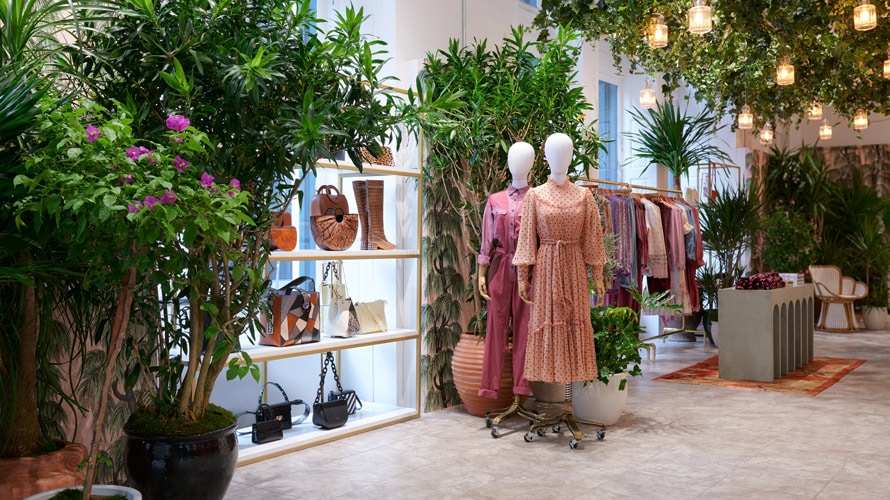 Inside the Shopbop pop-up store
Courtesy Shopbop
It’s an endless stream of in-person experiences for a store whose innovations have primarily come in the digital sphere. According to Suveyke, the brand has published daily content since 2011, when the store first expanded internationally. And thanks to parent company Amazon, the store has also long offered free two-day shipping for Prime members. (Amazon’s purchase of Shopbop marked one of its first major forays into fashion, which has exploded since the ramping up of Amazon Fashion on the company’s hero website.)

But just as important as the tech innovations, Suveyke said, is keeping the brand’s product assortment current and cutting edge, a sentiment that is reflected in not only the products available at the pop-up, but also the decor and programming.

That fashion-focused outlook is reflected in other activations happening for the 20th anniversary: Along with the pop-up, Shopbop is also dropping #StyleSupport, a campaign centered on the fashion-centric conversations people have in their everyday lives; the campaign will appear in emails, on social media, in out-of-home and on Shopbop’s website. It’s also dropping a 20-piece capsule collection that users can shop in-store and online.

This focus has been an essential component of Shopbop’s longevity, said Suveyke—and something that’s apparent in the pop-up’s programming line-up, too.

“Trends have come and gone over the years,” she added. “What’s key is that our fashion and buying teams are in the market, tirelessly looking for the upcoming trends and emerging designers to be sure our product feels innovative and create[s] that perfect discovery experience for the customer.”

Fans of that original Bop store may hope to see remnants of the space in Shopbop’s first brick-and-mortar concept since its closing. But despite the fact that the pop-up is being done in conjunction with the brand’s 20th anniversary, Suveyke said that the pop-up is less about the brand’s past and more about its present.