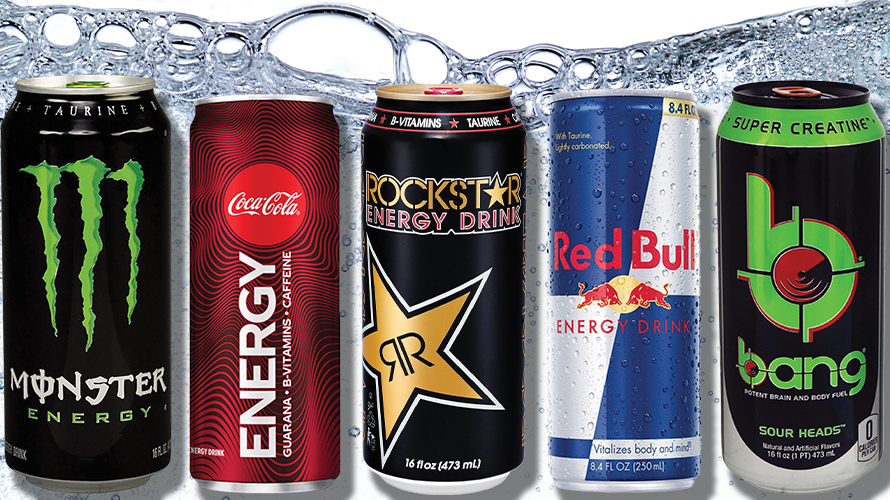 Coca-Cola and PepsiCo are hoping their offerings will provide their signature taste to the sector.

It might not be this way for long, though. As the energy drink market continues to grow—U.S. sales increased to $14.2 billion in 2019 from $10.1 billion in 2014, per Euromonitor—beverage giants Coca-Cola and PepsiCo are making moves into the category. In addition to their marketing muscle, these moves could transform the energy drinks sector from one that targets young men doing intense sports into something more broadly marketed to all.

In January, Coca-Cola, which owns a stake in Monster Energy, debuted its first energy drink called Coca-Cola Energy. PepsiCo revealed plans to acquire Rockstar Energy Beverages for $3.85 billion in March, and at the end of April, it announced that it will be the exclusive U.S. distributor for fast-rising energy drink Bang Energy.

“Unlike the Rockstar deal, we really don’t have meaningful restrictions in terms of the way that we manage our portfolio,” said PepsiCo CFO Hugh Johnston regarding the new arrangement with Bang in the company’s most recent quarterly earnings call. 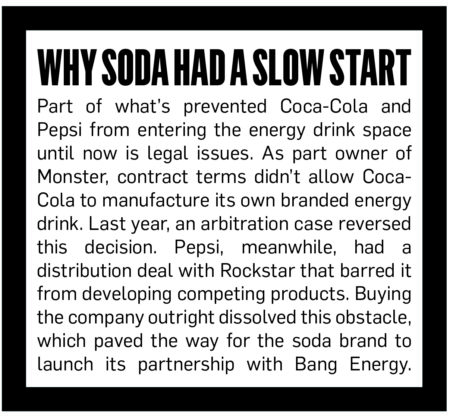 The current pandemic hasn’t seemed to abate the demand for added energy, either. In the six-week period ending April 11, in-store U.S. figures from Nielsen show that energy drink sales, like other items benefiting from consumer stockpiling, climbed to $450 million, representing a 9% year-over-year increase.

“Consumers’ needs have evolved,” said Coca-Cola brand director Brandan Strickland. “More people are seeking even more functional boost in their beverages to keep them going with their busy lives and activities. Increasingly, they are looking for beverages like energy drinks to provide that functional boost, which has driven rapid growth in that category over the past decade.”

Part of what has made Red Bull and Monster so successful has also, in a way, limited their growth potential. By focusing on extreme sports and young men, both brands have built a loyal following within a particular demographic but done little to improve their image in the mind of the general public.

“This category meets a very functional human need—energy to keep going—but there is not a one-size-fits-all energy solution for every person,” said Greg Lyons, CMO of PepsiCo’s North America beverage division. “The ability to reach more consumers through a diverse energy product portfolio is an exciting challenge.”

Both Monster Energy and Red Bull declined to comment.

“I think the efforts of both Coke and Pepsi are pretty clear in that they believe the category is a lot more mainstream than perhaps they thought it was going to be a decade or two ago,” said Kaumil Gajrawala, analyst at Credit Suisse. “Part of that could be that we have a generation of consumers that have now grown up with energy drinks always being around.”

When Coca-Cola debuted its energy drink, it did so in the most mainstream way possible: a 60-second Super Bowl commercial. The spot, starring Jonah Hill and Martin Scorsese, didn’t include a single dirt bike.

Numbers from market research firm Mintel reveal that, among consumers who don’t drink energy drinks, 39% avoid them because of how they taste. Both Pepsi and Coca-Cola have an advantage with a wider audience since people are familiar with their products’ flavors.

Combining high levels of caffeine with the classic taste of Coca-Cola, Strickland said the pairing will “appeal not only to current energy drinkers but also to the large portion of consumers who drink Coca-Cola today but don’t necessarily drink energy drinks.”

With an emphasis on promoting the product’s taste, Coca-Cola had planned to execute a massive experiential sampling program. The spread of Covid-19 and the new reality of social distancing, however, complicated that, putting these plans on hold. The company is instead donating its product to front-line workers.

“Here’s some Coke Energy to help ‘energize’ you through these long days,” reads a note from Coca-Cola after sending cases of its new drink to a police department in the San Francisco Bay Area. “Thanks for all you’re doing to keep us safe.” 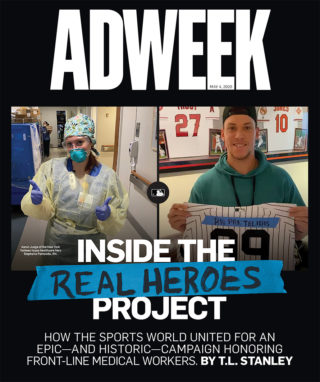 Click for more from this issue
This story first appeared in the May 4, 2020, issue of Adweek magazine. Click here to subscribe.
@hiebertpaul paul.hiebert@adweek.com Paul Hiebert is a CPG reporter at Adweek, where he focuses on data-driven stories that help illustrate changes in consumer behavior and sentiment.