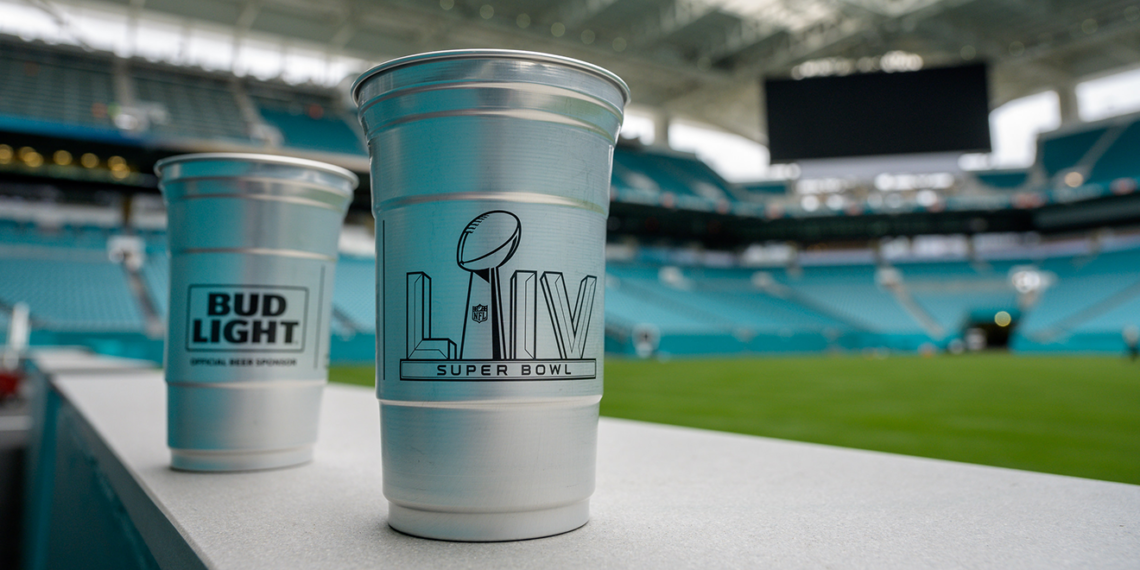 The aluminum cups will be used during regular games as well as the Super Bowl at Hard Rock Stadium. Matthew Noel

One of the downsides of gathering tens of thousands of people together for the giant party that is the Super Bowl is the 70-odd tons of trash the event generates.

In recent years, the National Football League and its brand partners have been exploring ways to lessen the Big Game’s environmental impact, from sustainable concession packaging to renewable energy. As part of that effort, the event’s concessions vendor, Centerplate, has partnered with Bud Light and container manufacturer Ball Corporation to supply 50,000 recyclable aluminum cups at Miami’s Hard Rock Stadium this year.

The companies claim the reusable containers will eliminate the need for as many as half a million plastic cups that would otherwise be used during the Big Game. Aluminum cups will also be used during regular-season Miami Dolphins games and other events at the 65,300-capacity venue throughout the year as part of the stadium’s broader goal to phase out 99.4% of single-use plastics across the board this year.

Experts consider aluminum a preferred material from a sustainability perspective because it can be recycled indefinitely with relatively little energy and without losing much substance in the process. An aluminum industry trade group claims that three-quarters of aluminum produced in the United States is still in use today.

Ball first rolled out its 20-ounce aluminum cups last September with a series of pilot programs at concession stands inside major venues across the country. Hard Rock Stadium became the first of these to implement the cups at scale during the Dolphins’ final home game of the season last month.

Outside of its concessions push, Ball has also teamed with actor Jason Momoa on a line of aluminum-canned water called Mananalu, joining a growing market of sustainably packaged waters that also includes offerings from PepsiCo, Coca-Cola and an upstart brand called Liquid Death.

“We developed the aluminum cup to ensure it meets growing demand for more green products, and we’re excited that our partnership will give this year’s Super Bowl fans the opportunity to do better by the environment,” said Ball chairman and CEO John Hayes in a statement.

The NFL ramped up its Super Bowl waste reduction goals in 2018 with a zero-waste program that was able to recover 91% of game-day trash—63 of the 69 tons produced. Two-thirds of the waste was recycled and the other third composted, according to the league.

For all the latest Super Bowl advertising news—who’s in, who’s out, teasers, full ads and more—check out Adweek’s Super Bowl 2020 Ad Tracker. And join us on the evening of Feb. 2 for the best live coverage of Super Bowl commercials anywhere.