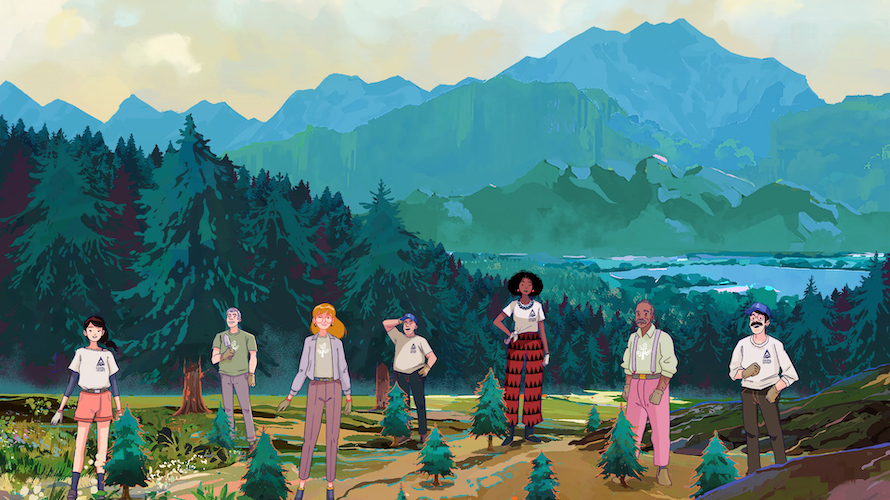 The maker of the bottled water brand has a troubled history with the environment, but a new initiative aims to change that. - Credit by CG Roxane

While all Crystal Geyser Alpine Spring Water products claim to be fully recyclable, the bottled water brand has a contentious track record when it comes to sustainability. Back in January, Crystal Geyser admitted to illegally storing arsenic in eastern California and transporting the hazardous metallic wastewater to treatment plants.

The campaign, “Simple… but not easy,” spotlights two real-life employees and one charitable partner who affirm the company’s ongoing commitment to sustainable stewardship in a series of animated shorts ranging from 30 to 60 seconds. The spots will air during popular cable shows and local news broadcasts in key markets in the West Coast throughout the summer, and will be disseminated across smart devices, digital, search, social and owned channels. Per a statement issued by the company, the campaign will also make use of immersive 3D audio on Spotify.

“At CG Roxane we are water obsessed—committed to only using 100% natural spring water, supporting our communities, celebrating our employees, and protecting natural spring sources, even when it’s not easy,” said Shawn Fitzpatrick, CG Roxane vice president of marketing, in a statement.

In an interview with Adweek, Fitzpatrick, who oversees all packaging, marketing and brand communications efforts for CG Roxane, explained that the 30-year-old company started at the foundation of its “water obsessed” brand to highlight what separates Crystal Geyser from every other bottled water company. CG Roxane collaborated with its agency partner, Demonstrate, to bring the “Simple… but not easy” concept to life.

The executive leaders and organizations featured in the campaign include Lionel Ferchaud, CG Roxane vp of manufacturing; Kemi Oba, quality control manager; and the American Forests Organization, a partner Crystal Geyser has helped to plant over 900,000 trees since 2001.

“We partner with nonprofits, charitable organizations and conservation trusts to protect the land and communities surrounding our sources,” Fitzpatrick said. “And most importantly we’ve always bottled our natural spring water directly at the spring source. Our employees and communities are very familiar with and have become part of this story, but we felt it was necessary to now share it on a wide scale.”

CG Roxane’s campaign comes on the heels of the opening of its new recycled polyethylene terephthalate (rPET) processing plant in San Bernardino, Calif. The factory will allow the brand to produce bottles using a minimum of 50 perfect rPET at its West Coast plants, with the goal of using 100% nationwide in the near future. According to the International Bottled Water Association, rPET products are “infinitely recyclable.” PepsiCo made a similar announcement in March, vowing that its bottled water brand Lifewtr would make a 100% conversion to rPET by the end of 2020.

“This plant has the capability producing 35 million pounds of rPET per year, which is nearly a billion plastic water bottles,” Oba said in the statement.

The sustainability-focused campaign also follows the company’s recent guilty plea to violating the Resource Conservation and Recovery Act and Hazardous Materials Transportation Act. Los Angeles court records indicated that CG Roxane, along with two contracted companies, United Pumping Services and United Storm Water, created an “arsenic pond” between Death Valley and the Sequoia National Forest. The three companies failed to disclose that the poison-laden water, transported from Crystal Geyser’s bottling plant in Olancha to the pond, was being subsequently pumped out of the pond and delivered to water treatment plants.

The prosecutors noted that neither the safety nor quality of Crystal Geyser’s water was being put on trial.

In an effort to educate itself and consumers about recycled materials and the recycling process, CG Roxane commissioned a national consumer survey conducted by One Poll, which was released in tandem with the campaign’s launch. Per Fitzpatrick, the survey results reaffirmed that people are now looking to purchase products from companies who are acting on sustainability from every angle.

The survey also found that 69% of Americans have become more environmentally conscious during the Covid-19 pandemic.

“We hope that the ‘Simple… but not easy‘ stories resonate with consumers and really help them to see that while bottling at the source and recycling takes an extra step or two, Crystal Geyser is making the [switch] to eco-friendly easy for consumers,” Fitzpatrick said.