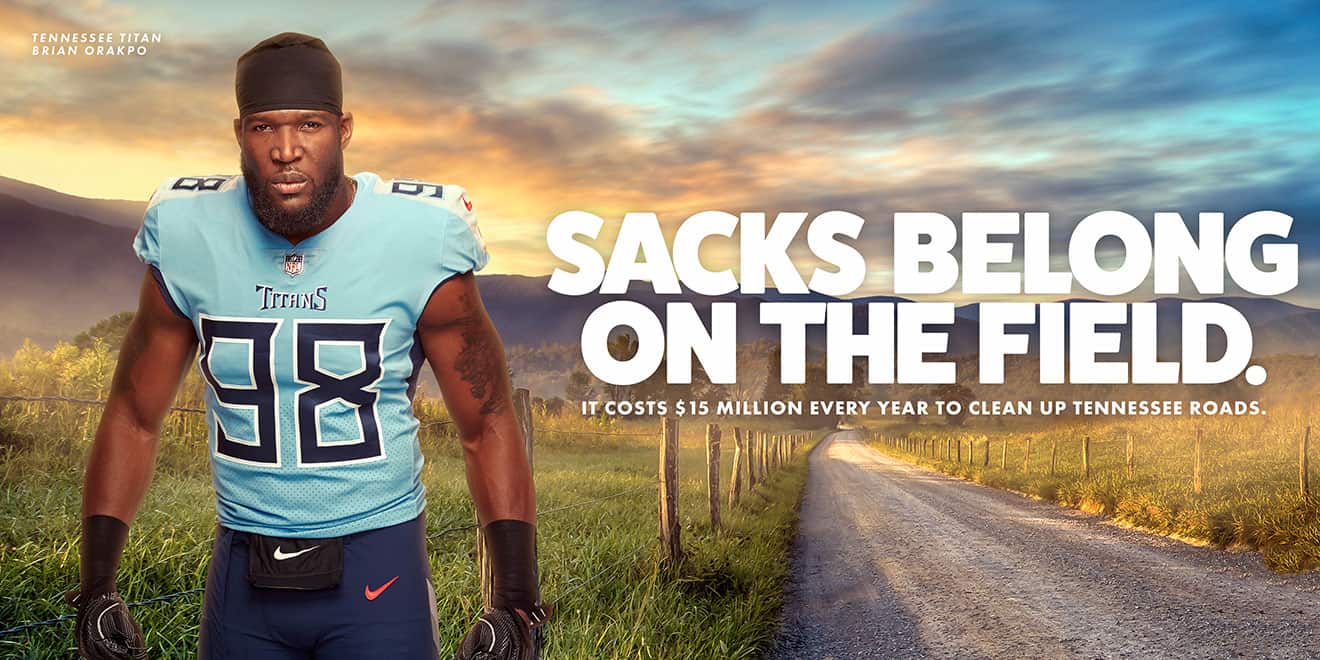 Tennessee Titans linebacker Brian Orakpo stars in one of the ads in the 'Nobody Trashes Tennessee' campaign. - Credit by Tennessee Department of Transportation/Enviromedia

“Don’t mess with Texas” is not just a catchy phrase for Texans to boast about the solidarity of their statesmen. In fact, it started as an ad. In particular, an anti-litter campaign that debuted in 1985.

Tennessee’s state pride-fueled anti-litter campaign is called “Nobody trashes Tennessee.” Created with a similar aim as “Don’t mess with Texas,” the advertisements in the campaign are meant to encourage Tennesseans (and those driving there) not to scatter their trash on the state’s roadways.

A year’s worth of research went into the campaign, Valerie Salinas-Davis, CEO of EnviroMedia, which worked in partnership with the Tennessee Department of Transportation, said. This included trips to Tennessee highways to count and analyze the litter that had been thrown on the side of the road. The goal was to “determine who is littering and get at why,” Salinas-Davis said, so they could best target the campaign.

Through said research, the agency discovered that female Tennesseans between the ages of 18 of 34 were most likely to litter. The fact that women were found to be the more common culprit was a surprise, according to Salinas-Davis: “We’ve never seen a skew to gender in all the years doing ‘Don’t mess with Texas,'” she said. Focus groups followed this initial research, which helped to form the final product: “Nobody trashes Tennessee.”

One of the campaign’s primary goals is to create awareness about littering—something that, through their research, Salinas-Davis said they discovered many people just didn’t think about. “Littering wasn’t really on their minds in their every day lives,” she said.

The campaign aims to “show litter and show beauty,” Salinas-Davis said. The state’s natural beauty is included in order to appeal to Tennesseans’ state pride, and love for its mountains and outdoor landscape. There’s also a celebrity component to the campaign, with several famous faces—all of whom have a connection to Tennessee—like singer Cassadee Pope, Memphis-born musician Valerie June,  Tennessee Titans linebacker Brian Orakpo and Nashville-based radio personality Bobby Bones. In the print ads and billboards, these Tennessee-based stars stand in front of backdrops featuring Tennessee’s trees, hills and highways. Each of the ads features different copy that reflects the celebrity who is featured—Orakpo’s has a reference to a (football) field, while Pope’s tells drivers-by to “share your voice.”

“The Tennessee Department of Transportation took a marketing-based approach [for this campaign], basing it on research, but still making it look interesting, fun, sometimes adding a sense of humor, a wink and a nod,” Salinas-Davis said.

These ads are only one facet of the campaign. There’s also a mascot, called Trashsquatch, who visits schools to spread his anti-littering message.

Overall, it’s a similar to the approach that was once taken with the “Don’t mess with Texas” campaign. And in that case, it surely paid off: Since it’s debut, of course, “Don’t mess with Texas” has become more than an ad campaign to encourage people not to litter—it’s one of the phrases that’s best associated with the state. Salinas-Davis believes that “Nobody trashes Tennessee” has similar potential.

“That’s pretty good for when you’re building a brand from scratch.”