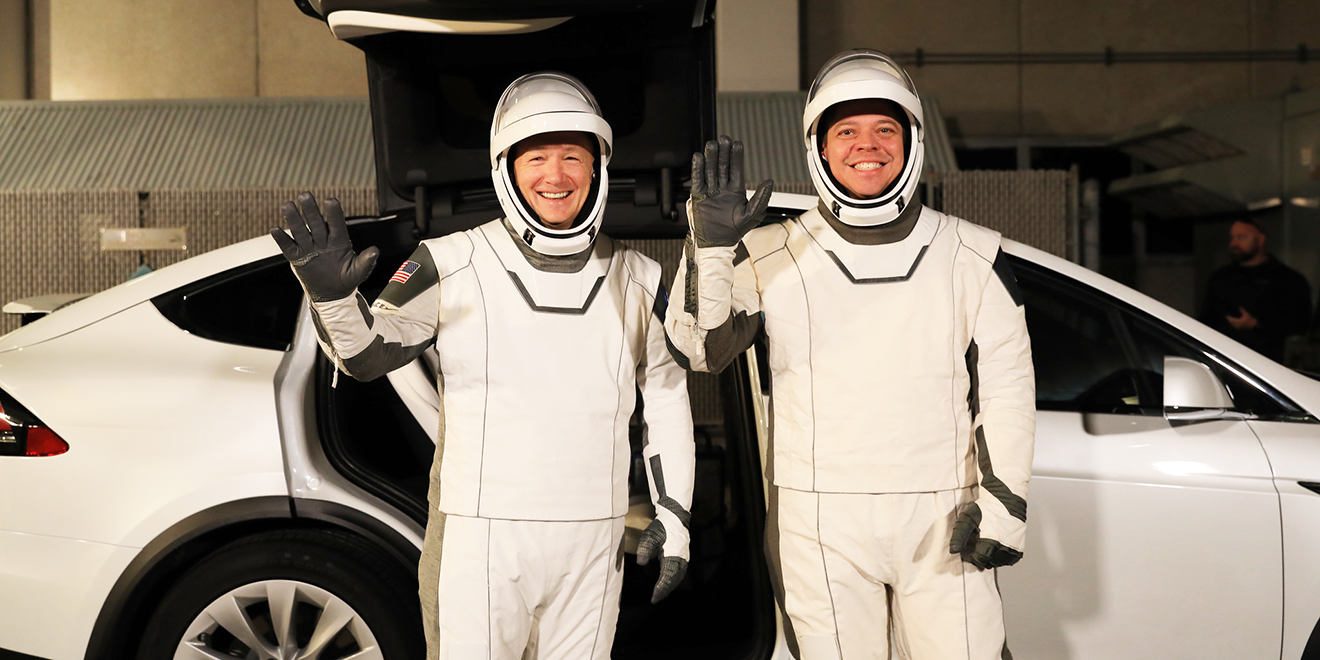 In a futuristic photo-op, a Tesla Model X gave astronauts Hurley and Behnken a lift to the launch pad. NASA/Kim Shiflett

Even though Americans have become inured to product placement, it was impossible not to notice the deft bit of branding that SpaceX founder Elon Musk pulled off before Saturday afternoon’s launch of the Crew Dragon Demo-2: For the quick drive to launch pad 39A at the Kennedy Space Center, astronauts Doug Hurley and Bob Behnken climbed into a sleek, showroom-new Tesla Model X.

Call it opportunistic or co-branding, it’s the sort of high-visibility stagecraft that’s possible when the founder of America’s leading private space company and the owner of its leading electric-vehicle brand happen to be the same man.

As a marketing opportunity, it was close to perfect. SpaceX’s partnership with NASA furnished the necessary entrée for Tesla. And not only was the snow-white Model X a sleek match to the white space suits that Behnken and Hurley wore, the $85,000 SUV’s gullwing doors allowed for easy boarding for the astronauts and looked mightily space-age while they were doing it. Best of all, since SpaceX essentially pays Tesla for various pieces of equipment, the cost to the automaker was essentially nothing.

Musk has some experience with space branding, of course. In February 2018, the eccentric and outspoken executive got the Tesla name stratospheric visibility as part of the Falcon Heavy Test Flight. Bolted to the top of the rocket’s second stage was Musk’s former daily driver, a $100,000 midnight-cherry roadster with a mannequin named Starman in the driver’s seat, his elbow casually resting on the convertible’s door.

Tesla wasn’t just piggybacking on a rocket ship—the brand rode into American living rooms courtesy of the Launch America livestream (paid for by NASA, which is to say: you and me). On YouTube, the launch notched over 2.3 million concurrent views.

But while business luminaries praise Musk for his marketing mastery, industry graybeards know that space branding is, actually, an old trick. Quite a few brands have preceded Tesla into orbit, either by playing an instrumental role in the actual missions or simply riding along through a combination of good luck and corporate funding. Here’s a look back at some of the brands that have gone to the stars:

When Buzz Aldrin landed on the moon on July 20, 1969, the Apollo 11 astronaut wore a 200-pound A7L space suit—and Omega Speedmaster watch on his wrist. The timepiece wasn’t a fashion accessory—NASA had selected the watches four years earlier for their reliability, proven in 1970 when the astronauts of the ill-starred Apollo 13 mission used the second hands to time the 14-second burn that aligned them for atmospheric reentry. In recent years, Omega introduced a Moonwatch commemorative edition; price: $9,650. 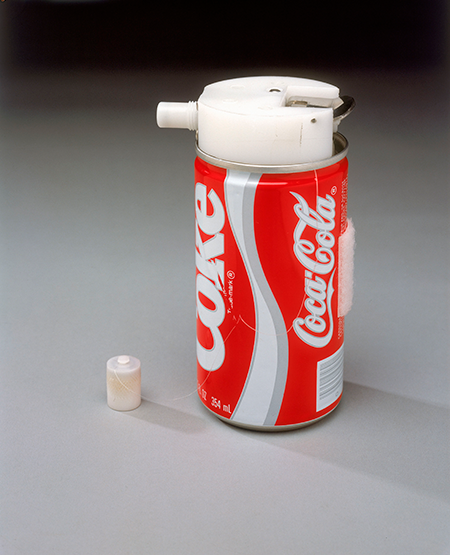 In 1985, product engineers at Cola-Cola designed a special can that NASA loaded onto the STS-51F mission of the Space Shuttle Challenger. Fitted with a special valve, the can’s mission was to deliver soda to the astronauts’ mouths without getting sticky soda droplets all over the cabin.

When executives at rival PepsiCo learned that Coke was blasting off, they insisted their brand be included, too. The soft-drink mission got its share of media coverage at the time, and Coke milked the incident for a bit more in 2014, when astronauts drinking in space was the theme of a 60-second Olympics ad. So: Did the astronauts prefer Coke or Pepsi? Neither, actually, since the drinks were both flat and warm by the time they reached orbit. 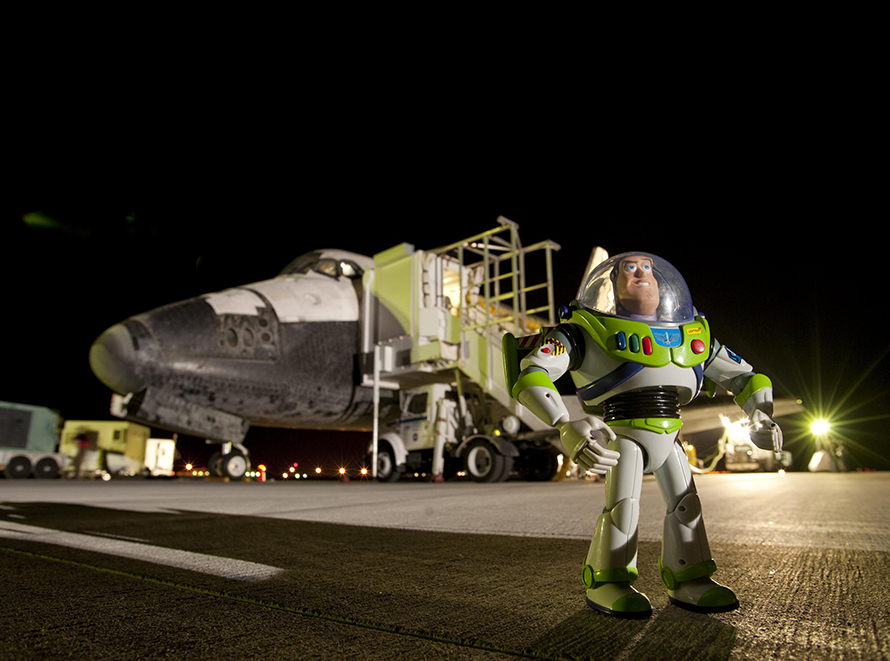 In 2008, NASA struck an educational partnership with Disney that resulted in a slew of online games and videos. But none of those noble components got as much attention as a foot-tall action figure of Buzz Lightyear, leading man of the Disney/Pixar Toy Story franchise. In May, Buzz blasted off as part of the Space Shuttle Discovery’s STS-124 mission. After docking at the International Space Station, Buzz spent 467 days in orbit. As if all that publicity weren’t enough, Disney got more earned-media attention in 2012, when the Smithsonian accepted the special Buzz figure into its permanent collection.

Twenty-one years ago, on the heels of a corporate overhaul that included debuting a new brand logo, Pizza Hut was looking for a high visibility place to advertise. Soon, management found one: the moon. The plan, developed under corporate chief Mike Rawlings (who’s now the mayor of Dallas), was to project the logo onto the lunar surface. The company consulted with experts ranging from astrophysicists to astronomers to brass at the Naval Observatory. The upshot? Forget it. Aside from sporting a nine-figure price tag, the lunar logo would have had to be the size of Texas for anyone on earth to see it. Undeterred, the chain went with Plan B and slapped a 30-foot logo on the flank of a Russian-built Proton rocket, which took off from Kazakhstan’s Baikonur Cosmodrome in July 2000.

Even American consumers who’ve had nary a brush with Japanese pop culture will recognize Hello Kitty, the cute, whiskered and mouthless character that parent company Sanrio has turned into one of the largest licensed toy and accessories brands in history. From jewelry to housewares and footwear, Hello Kitty is everywhere. Hence, it was only a matter of time before Kitty went to space. In summer 2014, a 1.6-inch tall kitty blasted off aboard Hodoyoshi 3, a microsatellite roughly the size of a sidewalk trash can. While the mission was part of a larger, government-funded science and education initiative, Sanrio made the most of the marketing opportunity that it was. The company accepted 180-character messages from the public, selecting 10 of them to screen above the window overlooking Earth. 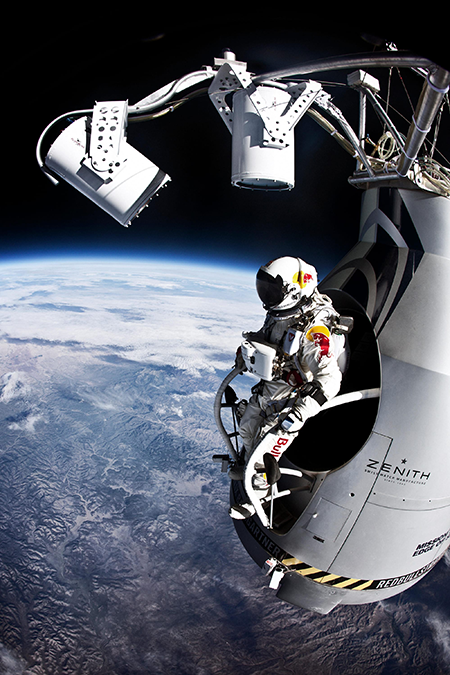 As part of its Stratos project, energy drink Red Bull achieved some high-velocity branding in 2012 when it underwrote Felix Baumgartner’s voyage aboard a helium balloon to an altitude of 128,100 feet, where he jumped. Over 8 million people watched live on YouTube as the Austrian fell 24 miles and, courtesy of some very strong parachutes, landed in the New Mexico desert. The event helped to permanently associate the Red Bull brand name with swagger, adventure and extreme sports. But while Baumgartner set records for speed and distance, his jump wasn’t technically from space. The Kármán Line, which world governments generally accept as the boundary of space, lies at 330,000 feet. So, technically, Baumgartner jumped from the edge of space. But, you know, close enough.