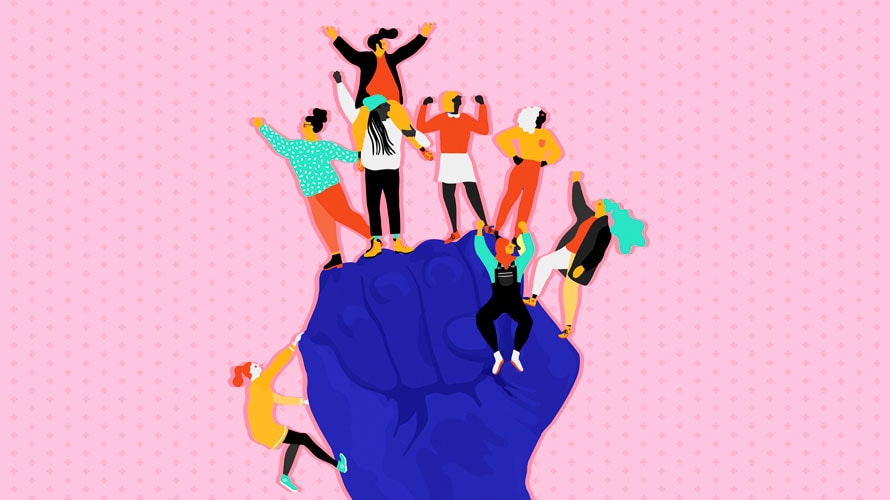 Too often women are left to fight for gender equality without the support of male colleagues. - Credit by Getty Images

My dad wouldn’t call himself a feminist. He married my mom at 36, and they had three children. My mum stayed home, and he worked as a merchant at the same company for almost 40 years. Now retired, he spends a lot of his free time on the golf course. Not exactly the portrait of hardened feminist, at least from the outside.

But, of course, appearances aren’t everything. And while there are thousands of ways to express feminism, the assumption that it’s strictly about protesting or campaigning is all too common. I believe that the small day-to-day actions and attitudes can, will and often do add up to having an even bigger impact on gender equality.

This was definitely my experience growing up and has formed my perspective around the quieter form of feminism that I seek to embrace.

From an early age, my father impressed upon my sister and me the importance of independence. He cheered us on during exams, celebrated when we were accepted to university and beamed with pride as we entered the workforce. There was nothing we couldn’t accomplish in his eyes, no limit to where we might go. And it was exactly the same for my brother. There was no distinction along gender lines. It all just was.

Now I find myself leading a menswear company as CEO after moving my kids and husband across the country. The saying that women marry somebody like their father, in my case, is laughably true. My father was my ally growing up, pushing me on toward the future, and in the present, my husband is my equal partner in everything we do. While we’re both building our careers, he flies cover for me on late meetings, business travel and acts as my sounding board at moments of self-doubt.

It seems like the time to make meaningful change in the workplace is now. ... Why aren’t more men jumping in to help drive change?
It’s easy for me to sit here and write about how my feminist father, husband and even my boss have helped me get to where I am today, but I realize that this experience is unique. It’s too unique. Not all women are raised in this way; too few have the unbridled support of their partners, and so many don’t have the privilege of working in an environment that champions them. It takes men willing to stand up for women to accomplish true gender equality.

What began decades ago with the first steps of the women’s rights movement is still being shaped and fought for through movements like #TimesUp, through activism for women of color and transgender women, through efforts to close the pay gap and so much more. Strides have been made, of course, but there’s a long way to go.

A recent study by Promundo, a global organization that promotes gender justice and equality, showed that 60% of men think there should be more women in positions of leadership at work. When I marry that with the finding that men want to do more to help and women are asking for more help, it seems like the time to make meaningful change in the workplace is now. So, what’s the issue? Why aren’t more men jumping in to help drive change?

Of course, there is no easy answer to that. But from the many conversations I’ve had with men on this topic, it seems like there’s a split between a misunderstanding of how to help, fear of doing something wrong and, in some cases, obliviousness. When I hear these things in conversation, I offer concrete examples of how men can have a vocal, active role in the fight for gender equality. These are sometimes simple actions, like yielding the floor in a meeting, or more thoughtful ones, like challenging men to educate themselves about the challenges women face in their everyday lives. I’m heartened, though, that the appetite for change is there.

The conversation about allyship and equality is not just about the workplace and working women. It is just as important that women are being supported and lifted up in the home. In the same research conducted with Promundo, it was found that about half of women reported that they want more help from their partner with childcare and almost as many stated that they did a disproportionate amount of the housework. Here, I look to the example of my husband. I would say, for the most part, we are 50/50 on all things related to our children and to the home. It reminds me of my own upbringing and our bubble in which the playing field was always level. Obviously, that kind of environment matters to me, but it also sets an important example for my two young sons. This is the example we want them to be raised with.

And ultimately, that is where this all leads: to the next generation. To the work of creating a generation that doesn’t dream of equality but expects it. With boys, like my two young sons, believing that women are their equals in every way. And with girls, like my daughter, having the same access to opportunity as anyone else. Together, we can build that future through actions big and small, and we’ll all be better for it.