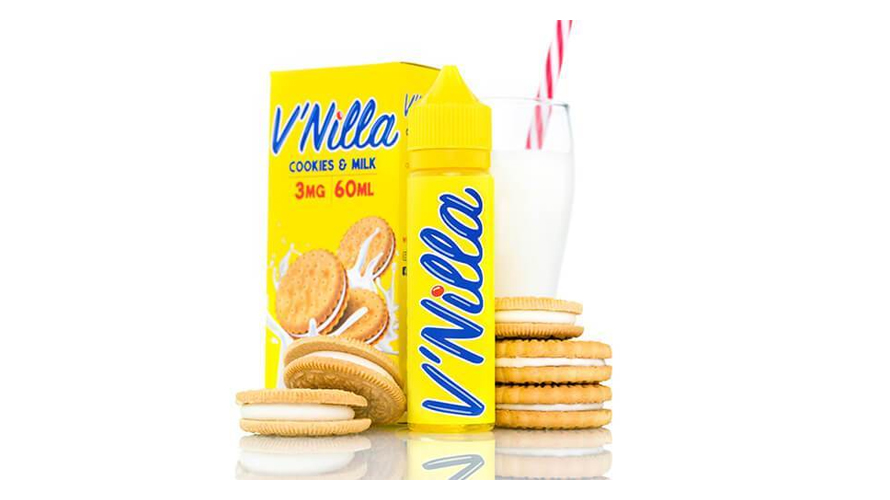 Tinted Brew's V’Nilla Cookies & Milk e-liquid was one of several targeted by the FDA. - Credit by Tinted Brew

If vaping has reached epidemic levels among teenagers, as public health officials have declared, it’s not too tough to see where the roots of the problem may lie, the FDA said this week in yet another crackdown on e-cigarette marketing.

The agency warned more than a dozen manufacturers, distributors and retailers that they’re endangering kids and violating federal laws by marketing e-cigarette liquids in packages—down to the colors, characters and names—that look nearly identical to juice boxes, candy and cookies.

FDA commissioner Scott Gottlieb, in press briefings reported in the Washington Post, said that “any reasonable person” could conclude that the products “are deliberately being packaged and marketed in a way that is designed to not only be appealing to kids” but also to confuse them by mimicking items they frequently consume.

One Mad Hit Juice Box, for instance, rips off the imagery of apple juice boxes like Tree Top; Whip’d Strawberry is a dead ringer for Reddi-wip; Vape Heads Sour Smurf Sauce looks like Warheads candy; and Twirly Pop, according to the FDA, “not only resembles a Unicorn Pop lollipop but is shipped with one.”

Brands targeted with the newest round of warning letters from the FDA are largely accused of two types of violations. The first involves the Federal Food, Drug and Cosmetic Act’s prohibition against misbranding. The second involves the Federal Trade Commission Act’s rules against unfair or deceptive marketing.

Potential penalties are outlined only vaguely in the letters as “including, but not limited to, civil money penalties, criminal prosecution, seizure, and/or injunction.” The brands have been given 15 working days to respond with a description of the “corrective actions” they’re taking to resolve the alleged violations.

This latest crackdown on nicotine-based products comes on the heels of other similar efforts: The California Department of Public Health and its agency Duncan Channon recently launched a comprehensive state-wide ad campaign dubbed “Flavors Hook Kids” to call attention to e-cigarette and tobacco products that masquerade as snacks and flash drives.

And the FDA has been aggressively trying to stop the sale of the popular Juul e-cigarettes to minors, issuing 40 warning letters recently after a nationwide “undercover blitz” found that children and teens had easy access to buy the products.

For their part, e-cigarette marketers have said their products are intended for adults, and in some cases, they’ve dropped the kid-friendly labels. The feds countered by saying they have evidence that these products have been for sale at retail and online within the last six months.

The FDA, working with the ad-regulating FTC, reports that calls to poison control centers about nicotine formulas have increased in the five-year period between 2012 and 2017, with more than 8,000 cases involving children.

The e-cigarette companies involved can be cited for selling to underage consumers and hauled into court if they don’t change their practices and packaging.

Side by side, the similarities in packaging between the FDA-cited e-cigarette products and grocery and convenience store staples are unmistakable. Take a look at some of the more obvious examples.