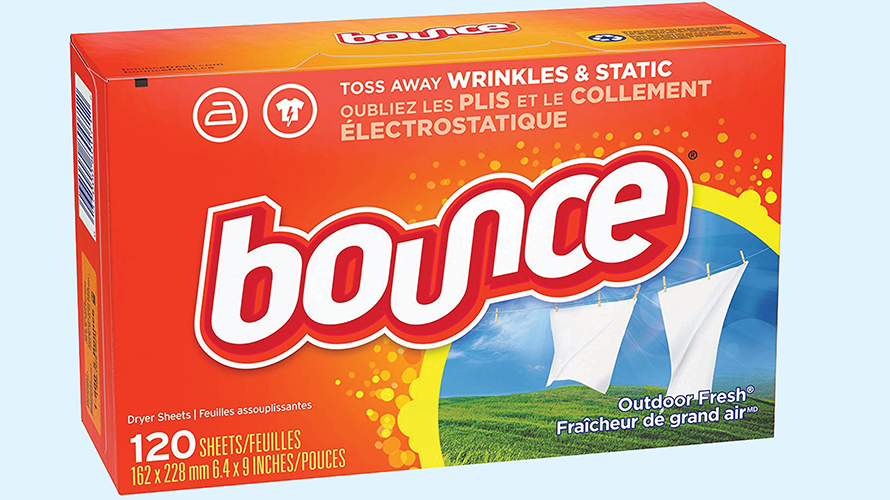 The sheets’ antistatic properties make them useful for cleaning laptop screens or pulling pet hair off of upholstery and the smell helps make your suitcase smell less moldy. - Credit by Bounce

If you’re enjoying the soft feeling of your jeans or shirt against your skin at the moment, the odds are good that you owe a debt of gratitude to a woman named Audrey Gaiser. She wasn’t an inventor or an executive or a marketer, but something better than all three: She was an inspiration.

In 1965, Audrey and her husband Conrad lived on the top two floors of a duplex apartment building. The washing machines were down in the basement, leaving Mrs. Gaiser to watch the clock and then dash down the stairs at the end of the wash cycle so she could add the fabric softener (more than likely Procter & Gamble’s Downy brand, which hit the market in 1960). 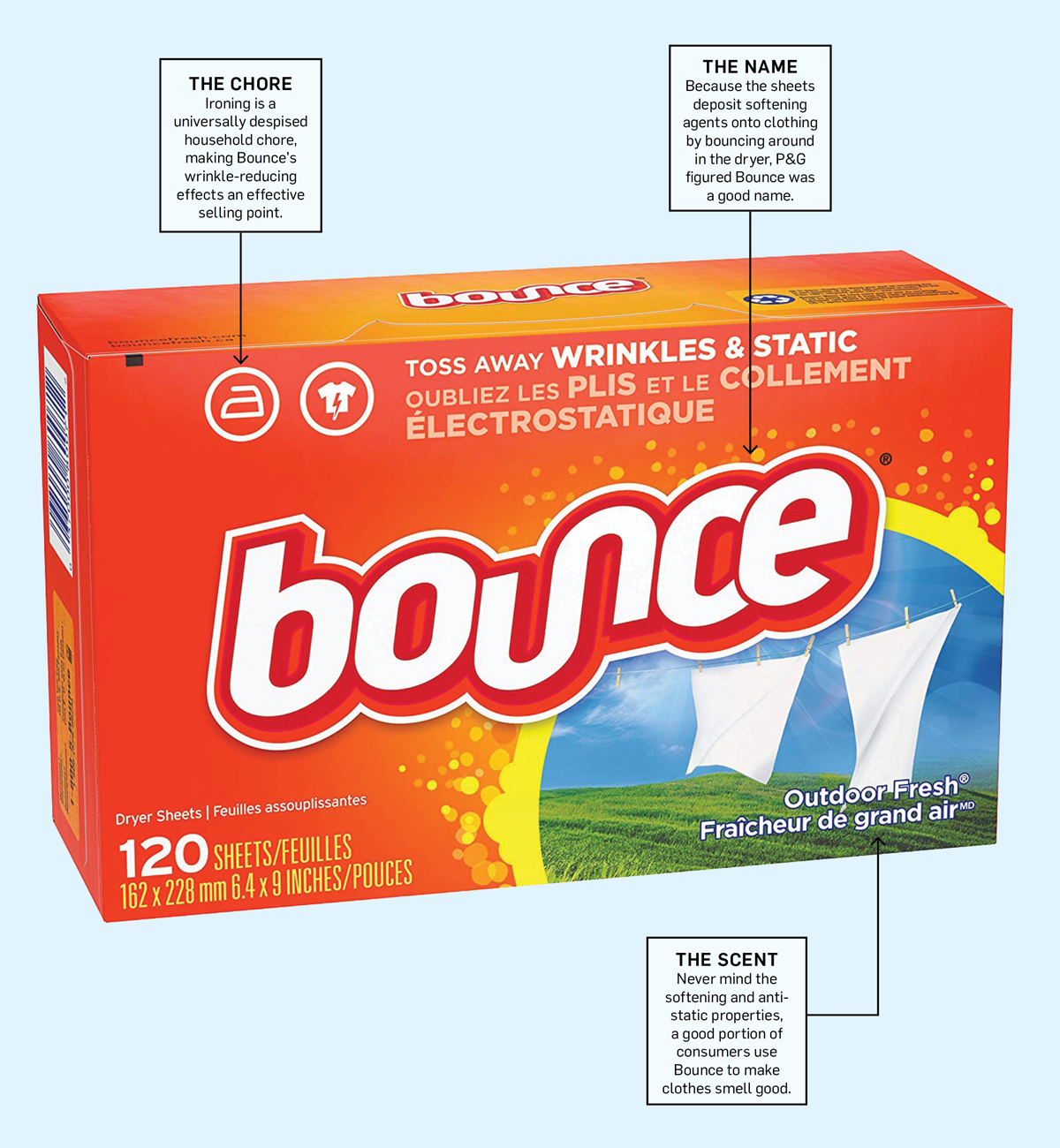 “Today, 80% of the washing machines have rinse drawers—but back then, nobody did,” explained Nate Lawton, P&G’s brand director of fabric care. “So you had to open the machine and catch the rinse cycle.”

While this drama was unfolding, Conrad Gaiser watched his wife with increasing concern and then finally decided to help. By giving Audrey a break by doing the laundry himself? No, of course not. Instead, Mr. Gaiser fetched some flannel from the sewing basket and doused it with some liquid fabric softener, then tossed it in the dryer to see what would happen. Incredibly enough, it worked nearly as well as the liquid softener. 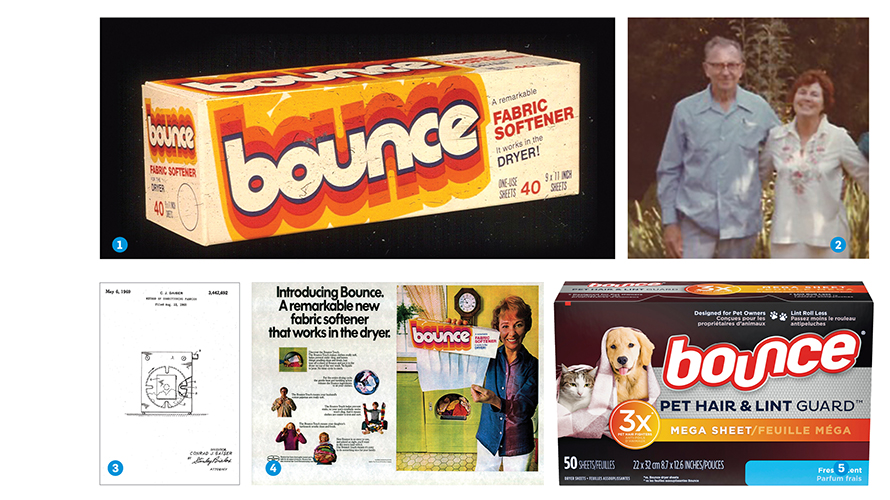 Bounce caught shoppers’ eyes with the groovy typeface and colors of the 1970s (1), though the product’s roots were in the previous decade when Conrad Gaiser invented a dryer sheet he called Tumble Puffs to help out his laundry-laden wife Audrey (2). Gaiser soon sold his patent (3) to P&G, which introduced the newly named Bounce to the market in 1972 (4). Since its introduction, Bounce has launched many product extensions, including a formula aimed specifically at loosening pet fur from clothing (5).

In 1968, Gaiser secured U.S. Patent No. 3,442,692 for his dryer sheets, which he called Tumble Puffs. Seeing the opportunity, P&G bought the rights from him, tweaked a few things and introduced the result in 1972: Bounce.

Today, Americans spend some $400 million on dryer sheets—which both soften clothes and neutralize static—and a whopping 90% of the market belongs to Lever Brothers’ Snuggle and P&G’s Bounce, though the latter is the dominant brand and has essentially become synonymous with the category. The sheets are so widespread and easy to use that most of us give little thought to how they actually work: Fabrics that tumble around in the dryer build up electrons by rubbing together, creating static cling when the positive and negative surfaces fuse to one another. By bouncing around inside the machine’s drum (that’s how the product got to be called what it is), Bounce neutralizes those charges with a coating of a chemical called dipalmethyl hydroxyethylammoinum methosulfate. Meanwhile, ordinary fatty acids provide the softening effect.

But the softening and antistatic effects, desirable as they are, might actually be the runner-up reasons why so many people use the brand. Softer clothes are less likely to need to be ironed, Lawton explained, and ironing “is the second most hated chore behind cleaning the toilet. So dryer sheets allow [consumers] not to have to worry.”

That’s a lot of benefits crammed into a simple sheet you just throw into the machine. So, thanks Audrey. 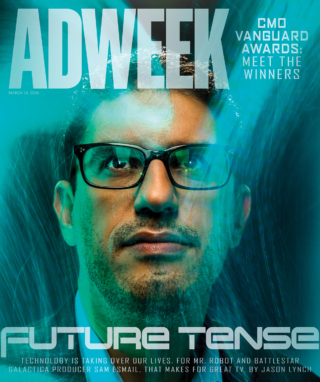 Click for more from this issue
This story first appeared in the March 16, 2020, issue of Adweek magazine. Click here to subscribe.
@UpperEastRob robert.klara@adweek.com Robert Klara is a senior editor, brands at Adweek, where he specializes in covering the evolution and impact of brands.