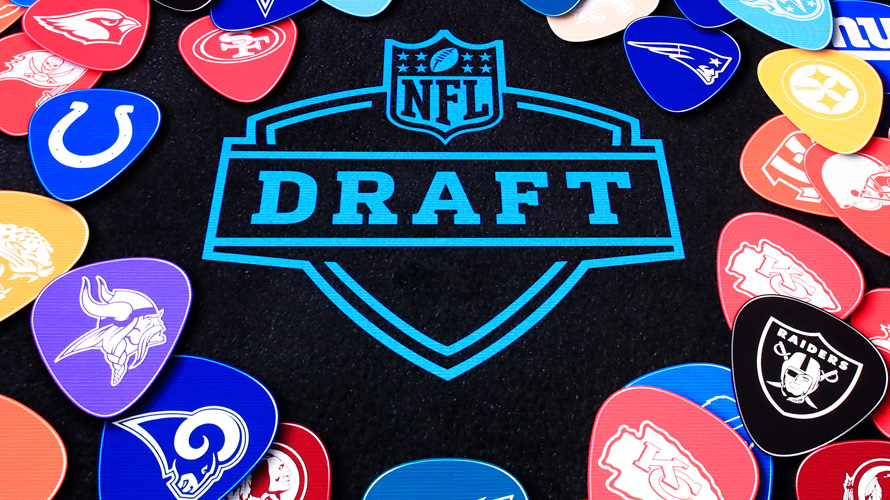 Even without an in-person event, the league is finding ways to hype up fans. - Credit by Getty Images

The biggest sporting event of the foreseeable future will not involve any athletics. No one will throw a ball, block a pass or break a tackle. There will be no highlight reel or box score, no Jumbotron or replay booth.

This year, the NFL Draft, which typically resembles a sort of ostentatious debutante ball for besuited up-and-coming football stars, will more closely resemble a workplace Zoom meeting. In the era of social distancing, football’s rookie draft represents the brightest glimmer of hope that sports will return to America before the year is out.

ABC, ESPN and NFL Network are broadcasting the festivities; but every media outlet and platform wants to try and capture the pent up excitement (and audiences) by joining the fray with mock drafts, pre-draft events, sideshows and live commentary. And teams are also hosting their own programming.

The draft, for which the stage had been literally set on the waters of the Fountains of Bellagio in Las Vegas, with players boating their way to professional contracts, will instead be held in general managers’ makeshift home offices. There will be no boats, not even handshakes—just a videoconference, subject to the mercurial whims of individual Wi-Fi connections.

Without any other American sports—except perhaps golf—on the horizon, the draft is an enormous moment for the entire sports landscape, from the fans who depend on sports and the businesses that depend on the advertising category.

A big event at a tough time for media

While fans are yearning for sports to come back and make the woes of quarantine more tolerable, sports media outlets need revenue—and the draft may help. The Ringer’s Bryan Curtis called this year’s draft a “sports media stimulus package.”

In an Ask Me Anything session on Reddit’s r/football subreddit, Washington Post NFL reporter Adam Kilgore said the ratings could be “bananas” and even “equivalent to an NFL playoff game.”

“I usually couldn’t care less about television, but I am kind of fascinated by how many people watch this,” Kilgore said in response to a user question. “People are so desperate for sports, and it’ll be a national, communal experience that I think will resonate.”

The draft won’t heal a segment of the industry already maimed by the economic turmoil wrought by Covid-19. Without any live sports to cover, Sports Illustrated has fired 6% of its already depleted editorial staff, while Vox Media’s SB Nation was hit hard by furloughs last week.

As with all live sports events, publishers and platforms are seizing on the opportunity. WarnerMedia-owned sports website Bleacher Report is producing a three-night live show hosted by Adam Lefkoe, Matt Miller and Connor Rogers. For the first time, the show will appear on the B/R mobile app. (Past years’ shows were streamed over Facebook Live.)

This year’s programming is sponsored by Quicken Loans and sub-brand Rocket Mortgage, a notable partnership now that many brands’ advertising budgets are depleted.

“Once you figure that piece out, being able to bring something like this—be it something like the NFL Draft and a first-to-market opportunity [sponsoring the in-app show]—is the easier part,” Bleacher Report chief revenue officer Stefanie Rapp told Adweek.

Rapp said the NFL Draft is Bleacher Report’s “highest trafficked event” on its website and app each year. Last year, Bleacher Report saw between 15-18 million visits to its site and app on each day of the draft, increases between 45-75% as compared to an average day, the company said. Rapp declined to say how Bleacher Report’s business has fared overall during the Covid-19 crisis.

While it’s covering the draft on its main site and across USA Today Network local publications such as the Arizona Republic and the Indianapolis Star, plus its NFL “wire sites” like Draftwire and Patriotswire, the publisher’s main activation is a partnership with Burger King. For every Burger King delivery order made during the three-day draft, USA Today will donate $1 to local hospital staff and first responders in the 32 metro areas that have an NFL team.

USA Today saw a lot of brand interest around the draft, but many advertisers have reduced budgets, according to Michael Kuntz, COO of national advertising for USA Today.

Business on the sports side has been “tough” for USA Today. While the publication did not provide exact numbers, Kuntz said USA Today Sports is seeing “year-over-year decreases anywhere in the 15-20% range.”

“The more challenging aspect of what we’re going through right now is it’s not for lack of audience or interest or engagement,” he said. “In many cases, we’re seeing record-breaking audience numbers. … The audiences are there, the engagement is there, but ad dollars—understandably so—are a bit scarce right now.”

Kuntz acknowledged that this could be the single biggest sports event “for some time” and that many brands wanted to take part.

The draft moves to social platforms

Without in-person events for fans, the platforms are playing an even bigger role this year.

The NFL is hosting a Draft-a-Thon, concurrent with the actual draft, to raise funds for Covid-19 relief efforts for the American Red Cross, Feeding America and the CDC Foundation. That show will be livestreamed on Twitter, TikTok, Twitch, Facebook, YouTube and Yahoo Sports, along with the NFL’s own digital properties.

TikTok, which has partnered with the NFL since last year, introduced a special hashtag challenge, #GoingPro, in accord with the draft along, with a new creative effect allowing users to create a virtual football player card with stats in the app.

And Twitter will be home to a chorus of boos directed at NFL commissioner Roger Goodell, a gimmick by Bud Light Selzter, which will donate $1 for every boo to the Draft-a-Thon effort (up to $500,000).

NFL teams themselves are also turning to social media to host their own programming, going directly to their fan bases.

For the Miami Dolphins, this draft could not be bigger. The team has three first-round draft picks, including the No. 5 spot. They had originally planned two in-person watch parties, one in Miami and one in Las Vegas, now both canceled. So the Dolphins decided to host their draft fiesta within the confines of their official Facebook fan group, which has more than 41,000 members.

“From a football perspective, this was always going to be a big draft for us,” said Laura Sandall, vp of marketing for the Dolphins. “So the fact that we had to think creatively and really shift our approach, I think, has actually been pretty exciting for us.”

Like many media outlets, the Dolphins will produce their own draft show, featuring former and current players, prize giveaways, fundraising opportunities and their general manager’s press conferences.

The virtual event, which is also sponsored by Bud Light Seltzer, started with a social series of draft stories from Dolphins alumni before the beverage brand signed on to sponsor the newly formed livestream. Sandall said they want to be a “second screen” during the draft. “It really creates an opportunity for us to be thinking differently, and coming out of this, I think, we’ll have some really great analytics,” Sandall said, noting that the Facebook group has already surged in members since they announced their draft plans.

While the Los Angeles Rams do not have a first-round pick, this is a very different draft for them. However, they are taking a similar approach to the Dolphins, livestreaming a show for fans on the second and third days of the draft. And on Wednesday, ahead of the draft, they hosted a special livestream event for season ticket holders in a Facebook group.

The two post-draft shows are sponsored by Albertsons grocery stores, along with its subsidiary brands Vons and Pavilions.

“AVP and all the partners we are working with around the draft are looking for innovative or different ways to authentically connect with consumers, and they know the draft is a big moment for our fans and in general for sports,” said Marissa Daly, general manager and vp of media for the Rams.

The Tampa Bay Buccaneers, who recently acquired Tom Brady and Rob Gronkowski, are also using their Facebook group to livestream a virtual event.

“While it’s unfortunate fans won’t be able to get together in person to watch this year’s draft, it’s inspiring to see a number of teams creatively use Facebook Groups to host virtual parties,” Facebook sports partnerships manager Nick Marquez told Adweek. “Not only does this provide people with a much-needed sense of connection, it’s also an invaluable way for teams to strengthen the relationships they have with their fans.”

A test of that relationship’s strength will play out this year in a big way when a bored sports fandom tunes in to see whether the Dolphins take Alabama quarterback Tua Tagovailoa.

For now, the Dolphins want you to tune in to find out.

“You know what? Your guess is as good as mine,” Sandall said. “That place is a vault! No idea whatsoever. No matter what, it’ll be interesting, let’s just put it that way.”