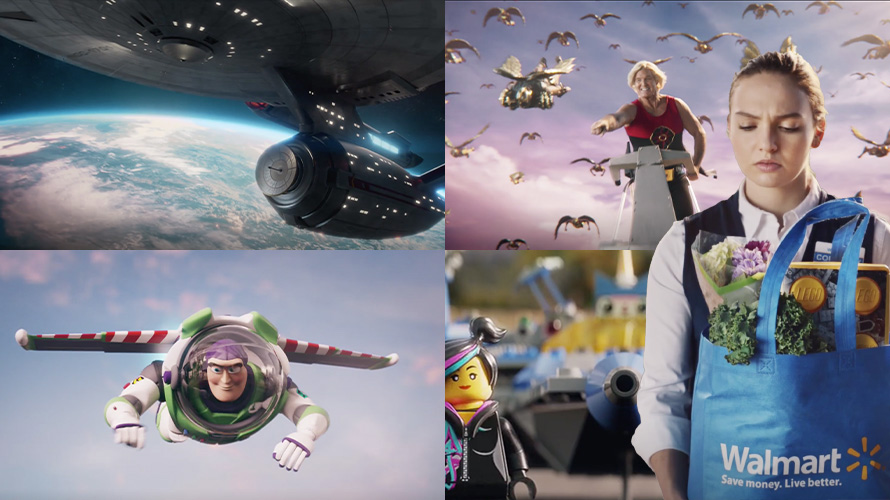 Cultural references give brands the opportunity to relate to consumers on a deeper level. - Credit by Walmart

Super Bowl 54 is upon us, as are the highly-anticipated advertising campaigns.

Last year for Super Bowl 53, we saw a range of well received spots that featured entertainment IP in one way or another. Bud Light aligned with Game of Thrones; Mercedes Benz featured Lassie, Free Willy and Looney Tunes characters; Stella Artois brought together the unlikely combination of Sex and the City’s Carrie Bradshaw and The Big Lebowski’s The Dude. And, of course, who could forget the incredible ensemble in the Walmart spot that starred the Batmobile, Ghostbusters, Knight Rider, Bumblebee, Lightning McQueen and many more famous cars from movies and TV shows.

This year for Super Bowl 54, advertisers have chosen to include entertainment IP at least twice as much as last year. Walmart has gone back to back with their new “Out of This World” campaign, this time featuring well known movie and TV aliens and space characters. “Famous Visitors” stars Buzz Lightyear, Flash Gordon, Bill from Bill and Ted, characters from Men in Black, The Lego Movie, Star Wars and an incredible scene honoring the 2016 film Arrival.

Facebook is celebrating their first Big Game appearance by paying homage to an iconic scene from Rocky, with an appearance from the one and only Sylvester Stallone. He’s joined by comedian Chris Rock and hundreds of Rocky fans on the famous Rocky steps in Philadelphia in a spot that celebrates Facebook groups.

Discover Card is running two spots, both of which feature clips from popular films and TV shows. The “yes” spot features clips from Mean Girls, Ted and Old School.

While the “no” spot features Austin Powers, Clueless and Friends.

Google is featuring classic film Casablanca in a moving spot about Google Assistant helping an elderly gentleman remember details about his wife. The 1942 classic appears when Google is asked to play their favorite movie, and we see the iconic exchange between Ingrid Bergman’s Ilsa Lund and Humphrey Bogart’s Rick Blaine at the airport.

Mountain Dew has recruited Bryan Cranston to reprise the role of The Shining’s Jack Torrance, recreating instantly recognizable moments from the horror flick. The axe, the door, the “Here’s Mountain Dew Zero” and the twin girls.

Pringles has tapped popular animation duo Rick and Morty, who find themselves trapped in a Pringles commercial. The spot is in line with the animation’s humor and is sure to be a crowd pleaser.

So why does there seem to be a growing trend of our favorite films and TV shows in Super Bowl campaigns?

Super Bowl is the most competitive (and expensive) advertising event of the year globally. The competition to capture viewer attention is fierce. A lot of people are tuning in to watch the ads as much as they are to watch the game, and there is an expectation to be entertained.

Licensing characters, elements and clips from well-known film and TV IP could be seen as giving the advertisers a bit of a head start. The awareness and popularity are already there, and advertisers are able to leverage that. For example, would the Walmart commercial be as appealing if we saw a group of unknown space characters instead of Buzz Lightyear or R2D2?

Use of entertainment IP is also quite attention-grabbing. The Discover Card “no” commercial kicks off with Dr. Evil from the Austin Powers franchise. It instantly captures viewer attention because the majority of viewers are familiar with the character. Would the viewer be as intrigued if the spot started with an unknown person saying no?

Featuring recognizable movie and TV moments can also tap into existing emotions and help target a certain demographic. For example, the Casablanca film is perfect for the Google spot. It’s one of the most treasured films in history, and many of the viewers that Google is targeting with this spot would have an emotional attachment to the film.

Advertisers are also banking on viewers to talk about their favorite Super Bowl spots of the year, both in person and on social media. Incorporating well known entertainment brands adds a fame element that encourages viewers to talk about the spot. An example is the Facebook campaign, which features a number of groups linked to the word “rock,” but viewers are most likely to talk about the last one they saw: the “Rocky Balboa Going the Distance” Facebook group. If viewers hadn’t seen Sylvester Stallone return to the iconic Rocky steps, would the rest of the spot have generated enough interest to be talked about considering all the other great Super Bowl spots on offer?

I see this as a growing trend and expect to continue to see a rise of entertainment IP in various forms appearing as often as celebrities, sports stars and musicians in major advertising campaigns around the world.