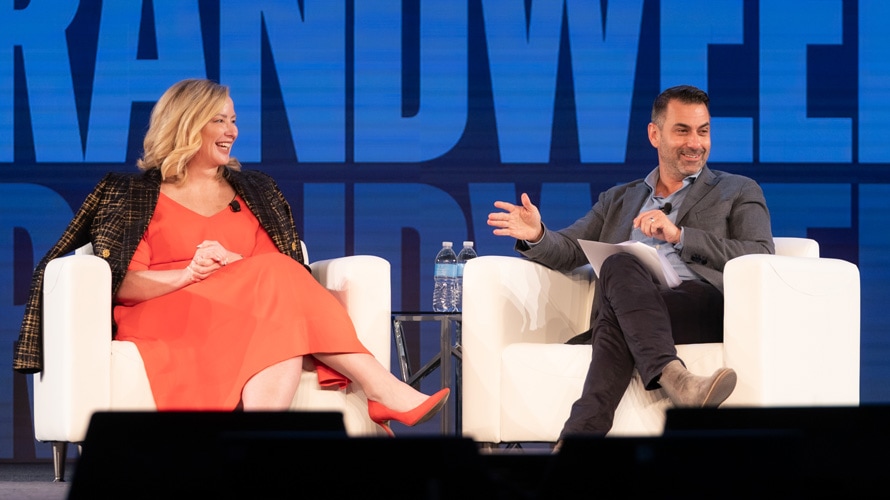 Amy Elkins and Matt Derella discuss Hustlers during 'How Connecting to Culture Can Drive a Successful Launch' at Brandweek. - Credit by Sean T. Smith for Adweek

Inspired by a true story, the movie featured more real women with multifaceted personalities, which didn’t have a ton of precedence on the big screen. For Elkins, it would be hard to market with less under the traditional “spray and pray” model, and reach for more awareness. But the all-female ensemble, including the star power of J.Lo, Constance Wu (2018 Adweek Young Influential), Cardi B and Lizzo, could command 235 million fans.

To avoid becoming an airplane movie, the 5-year-old company behind Bad Moms conceptualized an “interest waterfall” by looking at psychographic demographics and building on increasing, unifying sentiment with a choreographed launch on social media.

The trailer dropped in an 'interest waterfall' strategy.
Twitter
Elkins, who spoke at “How Connecting to Culture Can Drive a Successful Launch” at Brandweek, said she wanted to “make it a discovery for people all under the umbrella of female empowerment.”

She said Twitter was instrumental in the launch as a focus group for various cultural pockets. According to Twitter, social conversations surrounding equality are up 500% over the last year. As such, the platform reached out to partner on a panel discussion with the actors to amplify the conversation. #SheInspiresMe became the No. 2 hashtag on single day usage.

Twitter approached STX Entertainment about doing a panel to amplify the message.
Twitter
“Cultural relevance is a key decision factor,” explained Matt Derella, global vice president of customers, Twitter. “This is something every brand can aspire to.”

The week of release initially projected 13 million and surpassed that by nearly 34 million on opening weekend. At Brandweek, Elkins neither confirmed nor denied a possibility for a sequel.

@koimtv ko.im@adweek.com Ko Im is the community editor at Adweek and co-host of Adweek's podcast Yeah, That's Probably an Ad.