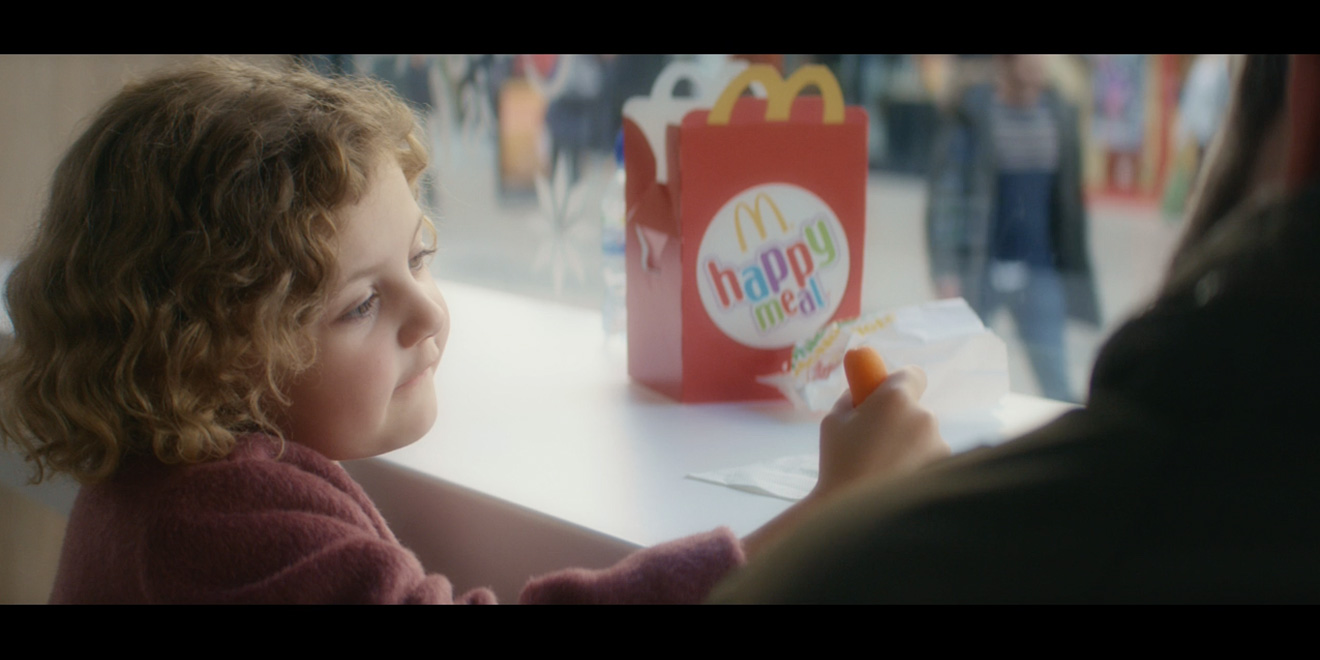 Today in holiday heart-grabbers, McDonald’s in the U.K. and Leo Burnett give us #ReindeerReady, a Christmas campaign in which a little girl becomes bizarrely attached to a carrot stick.

“Are you gonna eat that?” her father asks as they wrap up their McD’s Christmas Eve meal. She shakes her head, totally focused on the fat orange stick in her fist. “It’s for the reindeer,” she says, and will repeat, throughout the spot.

“Carrot Stick,” the ad that leads the work, follows the pair home as she clutches her reindeer snack with the vigilance of a bodyguard charged with protecting the Crown Jewels.

“Our campaign focuses on the anticipation, excitement and little moments of magic the run-up to Christmas brings,” says Emily Somers, vp of marketing and food development at McDonald’s U.K. “Our TV ad focuses on one little girl’s preparation for the big day, saving a carrot stick for the reindeer, a tradition the whole country will relate to. The wider campaign is also designed to reflect those moments of preparation that we all go through at Christmas. We can’t wait for people to see our campaign and look forward to seeing people all over the country be inspired to get #ReindeerReady.”

What sells the spot is the girl herself, whose dedication brings to mind how fervently we saved teeth to stick under the pillow, or refused to eat the cookies meant for Saint Nick. Of course, things go temporarily pear-shaped when her older brother makes a startling revelation—no, not that Santa isn’t real, but that there’s more than one reindeer.

This being an ad, however, that inconvenient truth becomes a pretext for yet another visit to McD’s, where Dad gets her a whole bag of carrot sticks, and—in his own feeble contribution to the mythology—”a cheeseburger for Father Christmas.”

Well, now we know why we never got the gifts we actually wanted.

The ad was broadcast exclusively on Channel 4 last Friday during the show Gogglebox in prime time, preceded by 10-second teasers featuring reindeer-ready carrots (now being punted on the McDonald’s website as “deliciously crunchy reindeer treats”).

It will also be told on Snapchat, where users can unlock a branded Reindeer Face Lens and a game called “Carrot Run,” built by MPC Creative. You can unlock the hub by scanning Snapcodes on McDonald’s Christmas packaging. Free packs of “reindeer treats” will also be shared with families in restaurants, and the whole thing wraps up nicely with a special version of the film on Christmas Day.

“We’re so proud to be launching our most ambitious Christmas campaign for McDonald’s yet, with loads of treats and surprises in store for our customers and audiences,” gushes chief creative officer Chaka Sobhani of Leo Burnett. “With playful unique Snapchat filters, a mobile reindeer game and branded Christmas carrots, we hope the story of our little girl (and her dad) warms the hearts of the nation, captures the magic of the Christmas spirit and has everyone asking that all important question, are you #ReindeerReady?”

As children with one goal in mind—pleasing the man who holds the Naughty/Nice list—the question had never even occurred to us. But in these more inclusive times, it’s probably bad form indeed to think only of the saint … and not his hardworking fleet.