Eric Eslao has seen the future of the industry, and it’s very luxurious 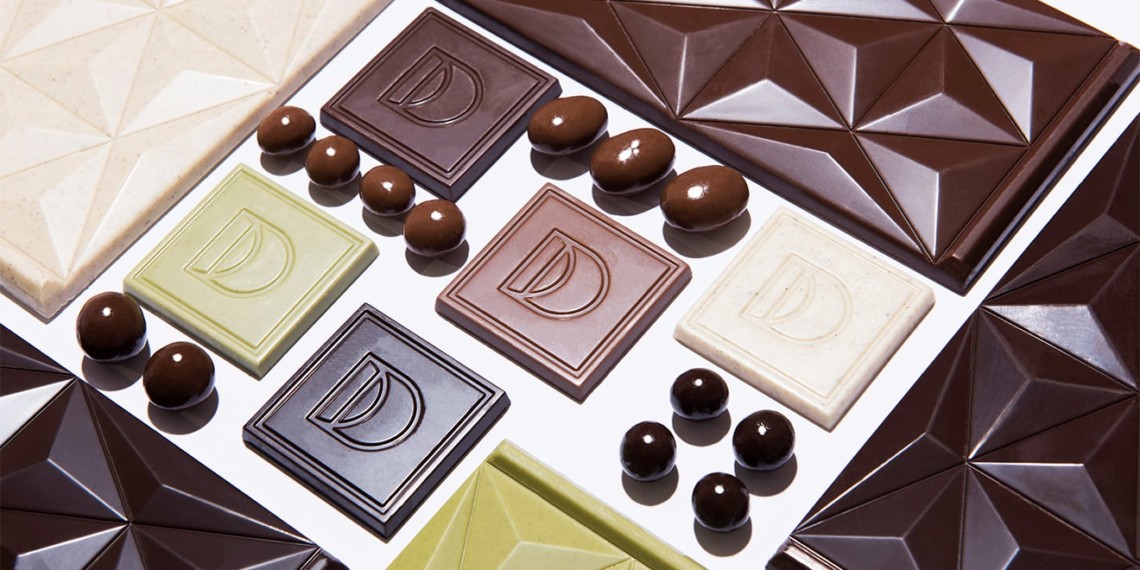 A few years ago, Eric Eslao found himself checking out some dispensaries in California, where recreational marijuana has been legal since 2016. Eslao wasn’t looking to score some Bubba Kush; he was on a research mission to see what sorts of edibles—treats like cookies or candy infused with THC, the psychoactive chemical in marijuana—were on offer.

As Eslao expected, there were plenty of edibles for sale, but they didn’t feel right to him. The packaging didn’t look professional (think: brownies wrapped in cellophane or foil), and the treats were lacking specific information on potency. Eslao recalls a gummy bear with 100 milligrams of THC. “If a normal person ate [just] the foot,” he said, “it would put them out for hours.”

Most galling, perhaps, was that many of the products featured names that were bad pot puns—stuff along the lines of best buds and pot luck. 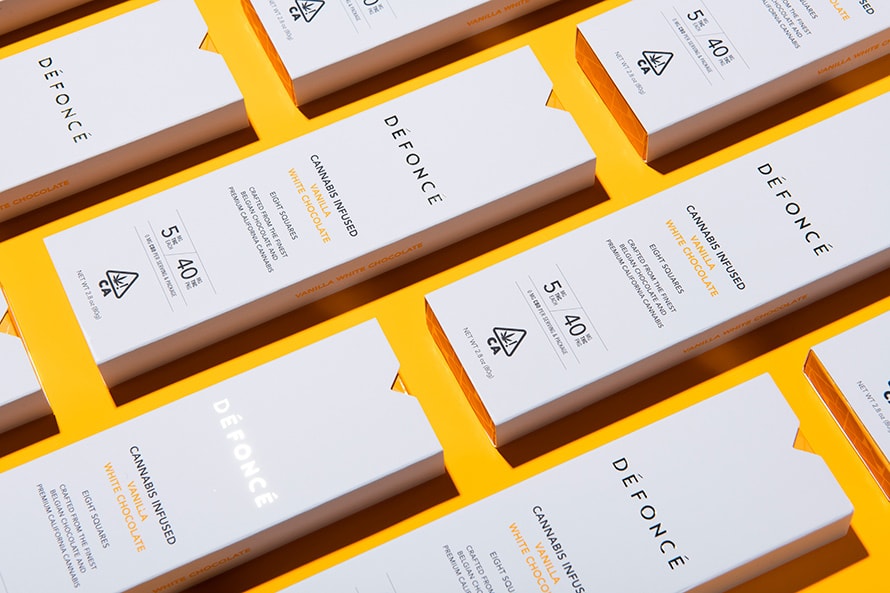 These boxes come with eight squares each in a variety of flavors.

All in all, Eslao concluded, edibles hadn’t evolved much from “the stoner-culture problem they have had for the last two decades.”

But the dismal results of Eslao’s research were actually good news. For some time, Eslao had been considering the idea of starting his own edibles brand. And since he’d be aiming considerably above the foil-wrapped goods he’d seen, his travels to dispensaries told him there was an opportunity afoot. That opportunity is the small but emergent category of luxury cannabis products, or what LA Weekly has dubbed “bougie bud brands.”

Call them what you want, but today, Eslao is at the center of things with a company called Défoncé. According to the company, the name is French for “high.” Google translate says “stoned.” But even if you never learned that word in high school French class, the mere cadence of it hints at what the brand is about.

Défoncé is a pioneer of fine cannabis edibles, specifically chocolates in varieties including espresso beans and matcha tea white chocolate. The bars, priced around $25 each, come wrapped in silver foil and dark, glossy paper, not unlike what you’d expect to find from the likes of nonpot brands such as Lindt or Godiva. And while Défoncé’s chocolates will (if you eat enough of them) get you to your happy place, the levels of THC are modest. And all of this, Défoncé’s marketing material contends, “is what cannabis customers have been asking for all along.”

That’s not just hyperbole. According to research from Arcview and BDS Analytics, spending on edibles in North America exceeded $1 billion in 2017 and is expected to hit $4.1 billion by 2022. Edibles are viewed as a vigorous growth segment within the cannabis industry because, while 81 percent of cannabis consumers inhale the product, 64 percent also like to eat it, according to a Colorado sampling.

What’s more, as cannabis continues its percolation in the American mainstream, head shop types of edibles like lollipops and gummy bears are not quite fitting the expectations of some consumers, people whose use is casual, don’t see themselves as stoners and aren’t willing to choke down a lousy piece of chocolate just to catch a buzz. For this reason, as BDS’s study shows, “making a good edible has less to do with cannabis and more to do with making good food or drink.”

Eslao believes his brand addresses all of these issues, the quality one especially. Instead of being merely a vehicle for pot, Défoncé is a confectionary brand that just so happens to include THC in the batch. Or, as Eslao put it, “We see ourselves as a food company first and a cannabis company second.” 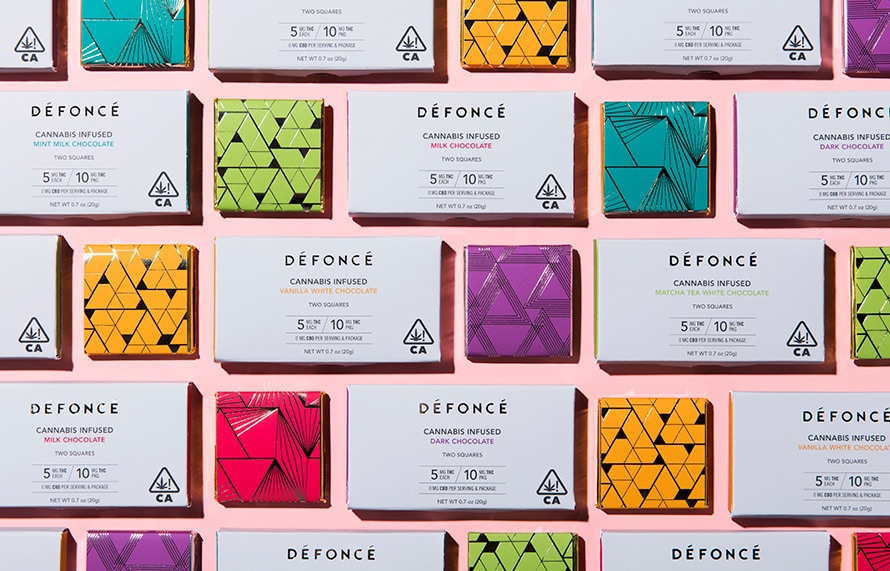 Each square in these single- and two-serving packages contains 5 milligram of THC.

From Apple to herb

Eric Eslao has no background as chocolatier, but the one he does have may be more significant. Before breaking away to start his own company, Eslao spent six years at Apple as producer of worldwide marketing for iTunes. “The level of detail that we argued about [at Apple] is insane, the amount of attention on the most mundane things,” he said. Yet Eslao’s focus on the minutiae has also resulted in a finely wrought product that differentiates itself in three principal ways. 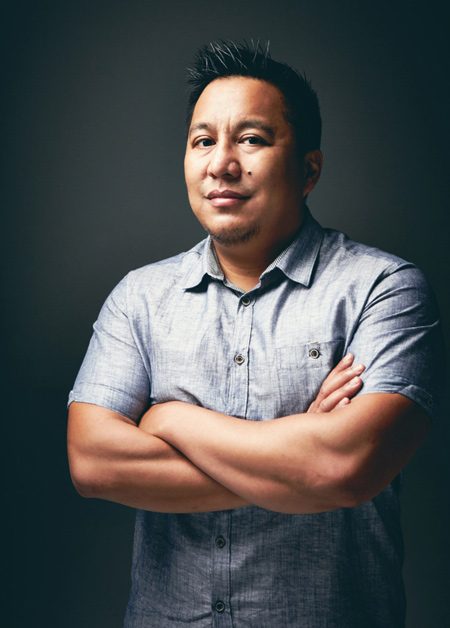 Eric Eslao is an Apple veteran.

The most obvious is the quality of the chocolate. Eslao doesn’t mind admitting that, rather than making his own chocolate, he sources it from Belgium. “We want to make sure we’re doing what we do well,” he said, adding that “Apple has that same concept.” (Apple, he meant, has recently relied on companies like LG and Samsung to supply screens for its iPhones.)

Once the chocolate arrives stateside, Défoncé introduces the THC in its own Oakland, Calif., factory using a “clean infusion” process that leaves little or no actual taste of pot. The cannabis itself comes from organic farms around the state, which grow their crop outdoors in the sun and without pesticides.

Eslao also took pains to make sure his product looks good on the shelf—no plastic wrap, no punny names. He believes Défoncé looks nice enough to be given as a present. “I really like the idea of our chocolate being giftable,” he said. “I don’t think that’s something cannabis operators have been looking at.”

Finally, there’s the dosing information. Recalling his days of doing field research, Eslao is floored by the idea that people might accidentally chow down an oatmeal cookie with so much pot inside they’d be incapacitated for half the day.

Indeed, as the legalization trend expands and perception of marijuana continues to evolve, brands like Défoncé are looking to cater to a new breed of cannabis consumer, one who, while seeking to get high, doesn’t want to get plastered. 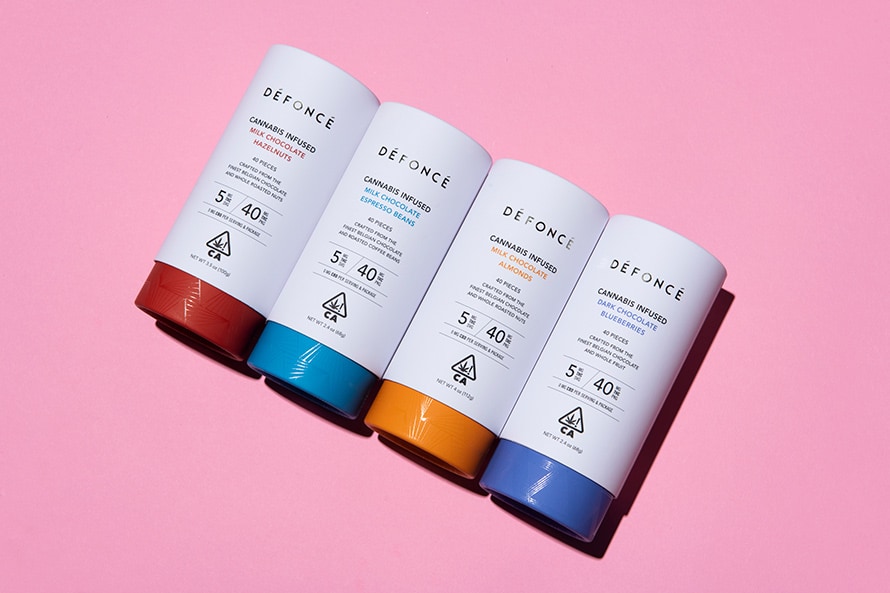 These bites are made from nuts and espresso beans.

Défoncé isn’t the only brand that’s struck on the idea of higher-end edibles. Kiva has been making cannabis-infused confections since 2010, notably chocolate bars in flavors like blackberry, tangerine and mint Irish cream.

And then there’s Beboe, a brand that The New York Times famously called “the Hermès of marijuana.” Founded by biochemist turned tattoo artist Scott Campbell and fashion executive Clement Kwan, Beboe is known for its pastilles and luxury vaporizer pens. Earlier this year, Beboe inked an exclusive deal to have a special collection featured in The High End, a cannabis “lifestyle and wellness” shop inside Barneys Beverly Hills flagship store. As it turns out, Défoncé’s chocolates are also stocked in Barneys in addition to 500 select dispensaries around the state.