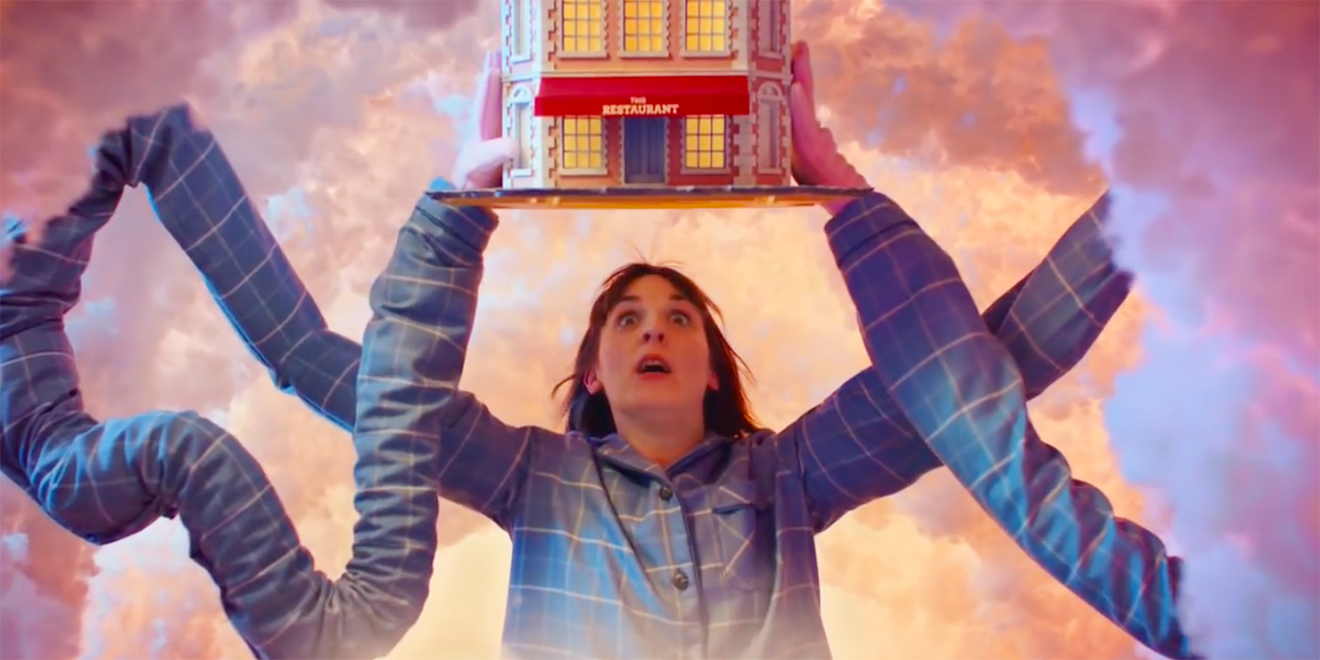 An actor portrays a cheese lover whose bizarre dream is aimed at soliciting similar stories. - Credit by Pilgrims Choice

For Pilgrims Choice, cheese is such stuff as dreams are made of.

And this freaky-fanciful spot from the English cheddar brand combines live action, puppets and computer animation to present a strange nocturnal vision. It blends Aardman/Muppets-style antics with imagery reminiscent of Roald Dahl or Sid and Marty Krofft.

At various points in the story, a dreaming woman’s arms stretch out like enormous snakes toward a restaurant high on a hill, food springs magically to life, and we meet a pirate with dozens of socks for a beard. It’s best if you just watch for yourself:

That cheese-toast was awfully runny.

Developed by Above+Beyond, the campaign taps into research that suggests amino acids in cheese can lead to bizarre, vivid dreams.

“We’re turning people’s cheese dreams into advertising, whether that’s TV, outdoor, social ads or point of sale,” agency creative chief David Billing tells Adweek. “To get the ball rolling, we needed to land the concept. So we went out via casting companies to find cheddar cheese lovers who could remember particularly bizarre or funny dreams they’d had after eating cheese.”

The inaugural dreamer, Charlie — portrayed by Kat Bond in the commercial — is a twentysomething call center worker from Scotland.

“This TV ad serves as a recruitment ad to start sourcing new dreams via social,” Billing says. “We’ll be asking people to submit their dreams via Facebook and Twitter. The idea that your dream could appear in a poster outside a supermarket is pretty amazing, really. Or on a shelf wobbler in a store. And, of course, we’ll keep the very best ones for a new TV ad.”

We’d volunteer our recurring fantasy of skinny-dipping in fondue, but it gets a little Bleu.

For “Charlie’s Dream,” BlinkInk’s Joseph Mann directs with considerable aplomb, seasoning the storybook elements with a dash menace to create a tasty tidbit that rewards repeat viewings. (Mann stands alone —heh—when it comes to serving up such fantastical fare. Check out his tasty romps for Churchill, Cravendale and Intu.)

“This was pretty much the unedited output of a subconscious mind, and we really didn’t want to make it into a safe ad,” Billing says. “The script’s power and uniqueness is that it’s not generated by a copywriter trying hard to be surreal. It’s vivid, weird, funny, unsettling. Which is exactly as it should be.”

Billing believes this approach should break through with “a pretty broad audience, skewing perhaps 30s to 50s, age-wise. Block cheddar is a grocery essential, and people sleepwalk down the aisle, buying stuff on promotion. We wanted to snap people out of that trance and go where the energy is, somewhere where there’s a legitimate place for the brand to play. And let’s face it, people are more interested in their dreams than cheese.”

He adds, “In the U.K., it’s accepted that cheese gives you weird dreams. So it wasn’t that tricky to make the connection.”

Here’s a behind-the-scenes clip that shows how the cheesy ad came together:

“The sheer amount of lights and rigging that were needed for the shot of Charlie’s head through the hole in the pub floor blocked her in completely,” recalls Mann. “So, trying to communicate with her at this point was actually impossible. Luckily, she played ‘head-coming-up-through-a pub-floor-hole’ very well, so I mostly just let her get on with it.”

The ambitious production pushed the creative team’s resources to the limits, resulting in some rather odd moments: “We ran out of money by the end, so I had to put my post supervisor into the cheese-on-toast costume,” Mann says. “I forgot to ask him about the shot before doing so, which meant I was actually having quite complex (production) conversations with a giant piece of cheese-on-toast with legs. Started to feel like I was having a really weird dream of my own.”