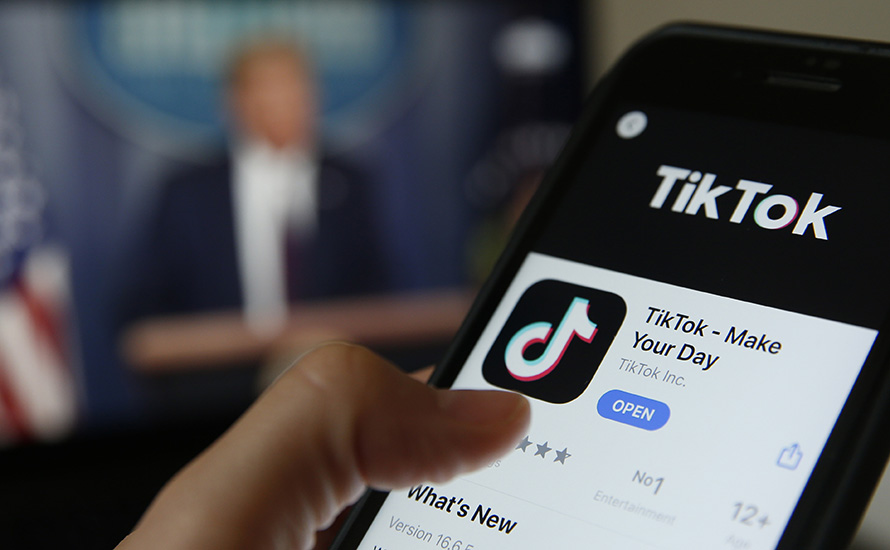 TikTok has become a flash point among rising U.S.-China tensions in recent months. - Credit by Hollie Adams/Bloomberg via Getty Images

TikTok has long defended itself against the Trump administration by claiming that it doesn’t collect—or share—data any differently than other apps and platforms that are based in the U.S. Nor, it has said, does it share its U.S. user data with officials in Beijing, where its parent company is headquartered.

The order is not an outright ban, which Trump previously said he would pursue—though legally, he would be unilaterally unable to enforce. Instead, Trump’s broad order invokes the International Emergency Economic Powers Act, a law that grants him emergency economic powers, to prohibit any “transaction” between individuals, companies and ByteDance. It’s unclear what constitutes a transaction.

In an unsigned statement issued after Trump’s proclamation, TikTok levied that the order undermines “global businesses’ trust in the United States’ commitment of the rule of law” and “sets a dangerous precedent for the concept of free expression and open markets.”

TikTok further claimed the administration offered no due process, and that it would pursue “all remedies available” to make sure it and the company’s users were “treated fairly.”

ByteDance has been in talks to completely divest from its U.S. operations of TikTok after facing additional regulatory pressure from the Committee on Foreign Investment in the United State, a government body under the Treasury Department with the power to reverse or block mergers over national security concerns.

Seattle-based Microsoft emerged last week as a potential buyer for TikTok in the U.S., Canada, Australia and New Zealand. The company did not return a request for comment about the executive order.

Notably, Trump’s order would go into effect five days after that deadline, on Sept. 20.

A potential court battle could center on the First Amendment if ByteDance claimed that Trump acted out of retribution for political expression on the app, experts told Adweek recently. It’s also not clear whether the IEEPA does apply to TikTok, as it specifically excludes “any postal, telegraphic, telephonic or other personal communication, which does not involve a transfer of anything of value.”

The app has been a thrown in the administration’s side recently: Teenagers on TikTok were credited with registering for Trump’s recent Tulsa rally, but not attending, a stunt that inflated the campaign’s estimated crowd attendance.

But national security claims, such as those proffered by the administration, can sometimes trump even First Amendment concerns, according to Katie Fallow, senior staff attorney at the Knight First Amendment Institute.

“If the administration can come up with a facially legitimate, non-speech-related rationale for its actions against TikTok, the courts may ultimately accept that and not see it as retaliation for speech,” Fallow said. However, she noted that the timing of Trump’s legal threats in relation to the Tulsa rally, largely seen as an embarrassment, “certainly seem relevant.”