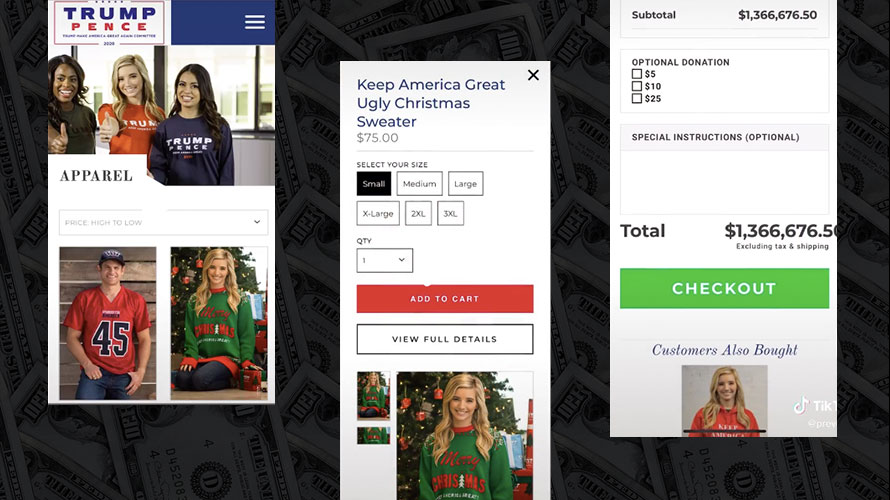 A new series of videos are circulating on the platform asking consumers to fill their carts with Trump merchandise—like the $75 Keep America Great ugly Christmas sweater or the $30 Trump gift wrap featuring Trump in a Keep America Great Santa hat—and then abandon those carts.

In one such video, which garnered 2.4 million views in a single day, TikTok user Preveroni laid out a hypothetical plan and the damaging effects of abandoning a cart in an online shop. The video has nearly 9,000 comments, including other users saying they did the same thing.

The goal is twofold: cost the Trump campaign money and screw with inventory. But the question is whether this tactic actually works.

The short answer: It does—to an extent

According to Mark Irvine, director of strategic partnerships at search marketing agency WordStream, when marketers begin to target users online, their first assumption is past behavior is the best indicator of future behavior.

What’s more, marketers know that 70% of shoppers don’t finish the checkout process immediately, so Irvine said ecommerce platforms put extra budget into remarketing or reengaging those particular visitors with the goal of getting them back to complete the purchase.

“If you’ve ever abandoned a cart online, you might recall having seen more ads or emails from that brand, oftentimes with discounts,” he added.

Ergo, by acting like interested potential buyers and then abandoning their carts, these users cost related ad campaigns more money as the brand continues to reach out.

“Whether it’s an intended retargeting campaign or a positive signal to an optimization algorithm, those users will likely be targeted again,” McLaughlin said. “Plus, other users that share similar traits will start to see the ads as well based on lookalike modeling. Overall, it creates a potentially expensive situation for an advertiser.”

Cart abandonment on a large scale could also mess with a brand’s data collection and measurement.

“Someone who comes to your site, browses products and adds to a cart is relatively rare and is usually a good signal to marketers,” Irvine said.  But he noted that the audience becomes effectively useless if over 95% of carts are abandoned.

That, in turn, can trickle down to future demand and site traffic analytics. But the impact on inventory, however, is less clear.

“[Ecommerce platforms] hope that more people will add these items to their cart because they assume that most of those items won’t actually be purchased immediately,” Irvine said. “Things only become interesting if there are a lot more items in people’s carts than you have inventory because then they assume they’re going to sell some of those.”

Irvine said while faux shoppers may be able to make some of Trump’s lower inventory items look like they’re sold out, they’re unlikely to deplete his inventory of popular red hats.

One mistake may be in building “ludicrously large carts”

So far, TikTok users have been loading up on thousands, if not millions, of dollars’ worth of inventory. But that could ultimately backfire.

Irvine said as a general rule, advertisers will pay more to remarket to larger cart sizes as they would for big-ticket items, like a mattress or a vacation, but they can also set up rules to detect “ludicrously large carts and omit them from these audiences and campaigns.”

And the Trump campaign team may have already done that.

As of 10:30 a.m. ET today, Kyle Rees, director at Gartner for Marketers, noted the quantity option seems to have been removed from product display pages on Trump’s online store. But he said the trickle-down effect could still be significant.

“While it’s now much more difficult for individuals to add $1,000,000 worth of merchandise to a spam shopping cart, it’s also going to create issues for campaign supporters who may have been looking to buy a couple of hats or T-shirts for themselves or their family and friends,” Rees said. “Now they have to manually add items one at a time. That’s a negative hit to site [user experience] for the average site user.”

“With the upcoming election and all of the news swirl that surrounded foreign interference in the 2016 election, fraud is reemerging as a very real topic that every brand will need to deal with in the coming months,” he added. “But political campaigns will have to be especially deft in how they combat this trend.”