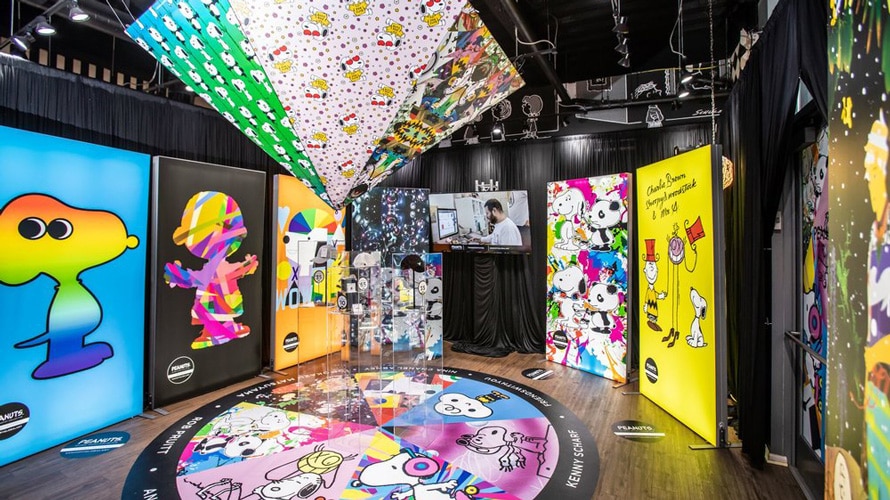 A view of the immersive installation that awaits shoppers at the Siam complex in Bangkok. - Credit by Peanuts

One of the grandest malls in Southeast Asia, the Siam complex in Bangkok that attracts some 250,000 people on a typical weekend, got a floor-to-ceiling infusion of cute this month, with a giant version of Snoopy’s red doghouse, pop-up shops selling graffiti-inspired Lucy Van Pelt swag, a Peanuts village and large-scale art installations featuring Charlie Brown, Woodstock and other characters from the classic brand.

It’s the latest (but far from the last) phase of a collaboration between Peanuts Worldwide, caretakers of the evergreen media property, and seven diverse artists that’s launched public art displays from several cities in the U.S. to London, Paris, Berlin, Tokyo, Mexico City and Seoul, with installations in other Asian destinations rolling out through the end of the year. 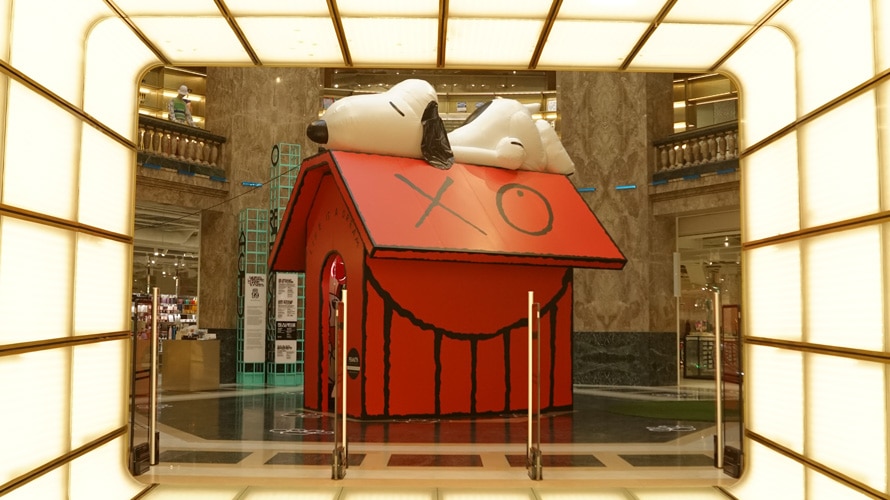 In Paris, Snoopy's iconic red doghouse is larger than life.
For a brand that’s nearing its 70-year mark, the splashy, high-profile program is a way to “keep the property fresh and new,” said Melissa Menta, SVP, marketing and communications, Peanuts Worldwide, while strengthening brand loyalty among the diehards, appealing to latent fans and potentially finding new audiences with its experiential, digital and product tentacles.

Menta, along with fellow brand steward and Peanuts Worldwide EVP Roz Nowicki, are famously protective of the Charles M. Schulz creations, as is the late artist’s family, whose stamp of approval is mandatory for any Peanuts collaboration.

For the current project, all sides agreed on some firsts: The iconic animated gang could co-mingle with participating artists’ signature characters (Snoopy hangs out with Mr. A and rubs shoulders with Pruitt’s pandas), and those artists could reimagine Peanuts in their own style.

The art project, with spinoff merchandise from Champion, Away, Sugarfina and others, has fanned out across more than 300 retailers, including Story, Macy’s and Urban Outfitters in the U.S., Galeries Lafayette in France, Brown’s in the U.K. and Hankyu in Japan. 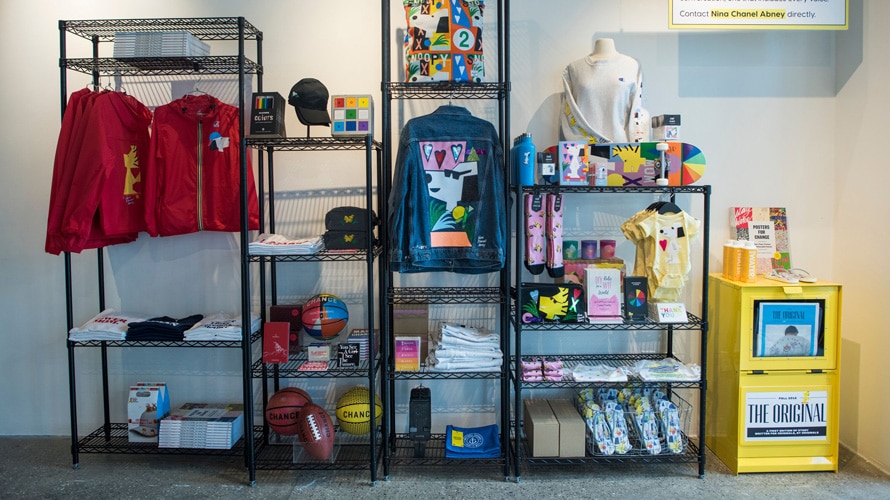 Artist-designed Peanuts merchandise on offer in Japan.
The flurry of activity around Peanuts, which will include upcoming appearances at San Diego Comic-Con and NASA events, can also expand the brand into OTT agreements and boost social media followings.

Apple TV recently debuted an original documentary-style short, Peanuts in Space: Secrets of Apollo 11, as part of a newly inked distribution deal for new Peanuts specials, series and other content. (A Charlie Brown Christmas and other holiday shows will continue to air on longtime network home ABC.)

The brand’s Twitter, Facebook and Instagram numbers now top 16.5 million, and during the opening week of Avengers: Endgame in April, Snoopy had three times and five times more Facebook engagements than Marvel and Disney, respectively, per Sprout. The hashtag #SnoopyGlobalArt, meanwhile, has 500,000-plus Instagram engagements. 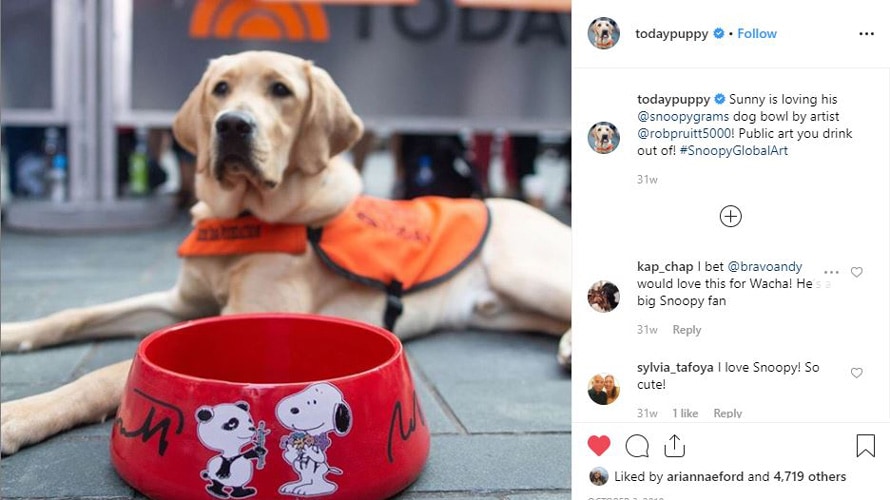 Last fall, Snoopy-inspired dog bowls by Rob Pruitt were placed around New York City's Chelsea neighborhood.
Adweek spoke to Menta about wading through more than 100 artists to find a handful of collaborators (who have produced north of 160 works of art to date), the delicate dance of guarding heritage and staying relevant, and taking Peanuts further into the stratosphere.

Adweek: Why go the public art route?
Melissa Menta: We wanted to do something accessible to everyone. We’d had the idea for a while—actually, since about 2013. We decided to move forward with it about three years ago. There were a lot of challenges, aside from the logistics, like figuring out how to market one program everywhere in the world because Peanuts means something different in every territory. In the U.S., we all know the TV specials and can quote from them. In Europe, it’s a fashion brand. In Japan, people there really love the design and look of the artwork. But the goal was to have something that could span the world in public places and resonate with lots of different audiences.

How did you select the artists involved in the project?
We worked with Yvonne Force Villareal and Doreen Remen (co-founders of New York-based creative consulting firm Culture Corps), who are responsible for public art in places like Las Vegas at the Cosmopolitan Hotel and the Highline in New York. We selected artists we thought would resonate in different territories around the world. Mr. A is beloved in France, for example. The artists have their own very loyal followings, and many of them were already Peanuts fans. When we saw Rob Pruitt’s work, we were drawn to a series of tombstones he’d done in the early 2000s, though that may sound a little morbid. He’d done one in yellow with a black zigzag pattern on it. He told us when we approached him that he had created it because he’d been so sad when Charles Schulz passed away.

What kind of access did the artists have to the property, and how is this different from other past collaborations?
We gave them access to our art bank, and we went with the artists to the Charles Schulz museum in Santa Rosa. And we allowed them to draw the characters in their own line, which we don’t typically do. Every piece of merchandise you see [historically] is the Schulz line. But we conceived this program so that the artists could put their stamp on it. We also allowed them to mix their characters with Peanuts characters. We’ve never done that before. That’s new and special for this project.

Were there some standout moments in working with the artists?
So many, like how overwhelmed Kenny [Scharf] was to have his space-themed art appear on an International Space Station practice module. And Tomokazu Matsuyama is so methodical in how he created his art, so he didn’t just want to send it to us. He invited us to his studio in Greenpoint, Brooklyn, and he hosted a tea ceremony. He explained to us how he came up with the pieces.

Is there such a thing as too much (media, activity, exposure) for a brand that’s already well known?
Yes, you can oversaturate on any given project, but we’re careful and we’ve always prided ourselves on that. Because there are different continents involved in our art project, they’ve all touched down at different times. In Asia, we’re just starting, and it’s not close to being enough.

Give us the top line on the Space Act Agreement with NASA.
We’ve been the unofficial mascot of the Apollo missions since the 1960s, and a few years ago we started talking with NASA about the 50th anniversary of Apollo 10 and 11. While there’s a history, we all wanted to do something going into the future. So we have animated STEM-related content in development and in-school curriculum guides, with the first phase of the school programs launched in February. Snoopy will be in Washington, D.C., for the Apollo 11 anniversary, in Toulouse, France (Cite de l’espace), and the Science Museum in London (the Apollo 10 module, dubbed “Charlie Brown,” is on display there). And there’s no term on this agreement, meaning it’s open ended, so we’ll be doing more things together.