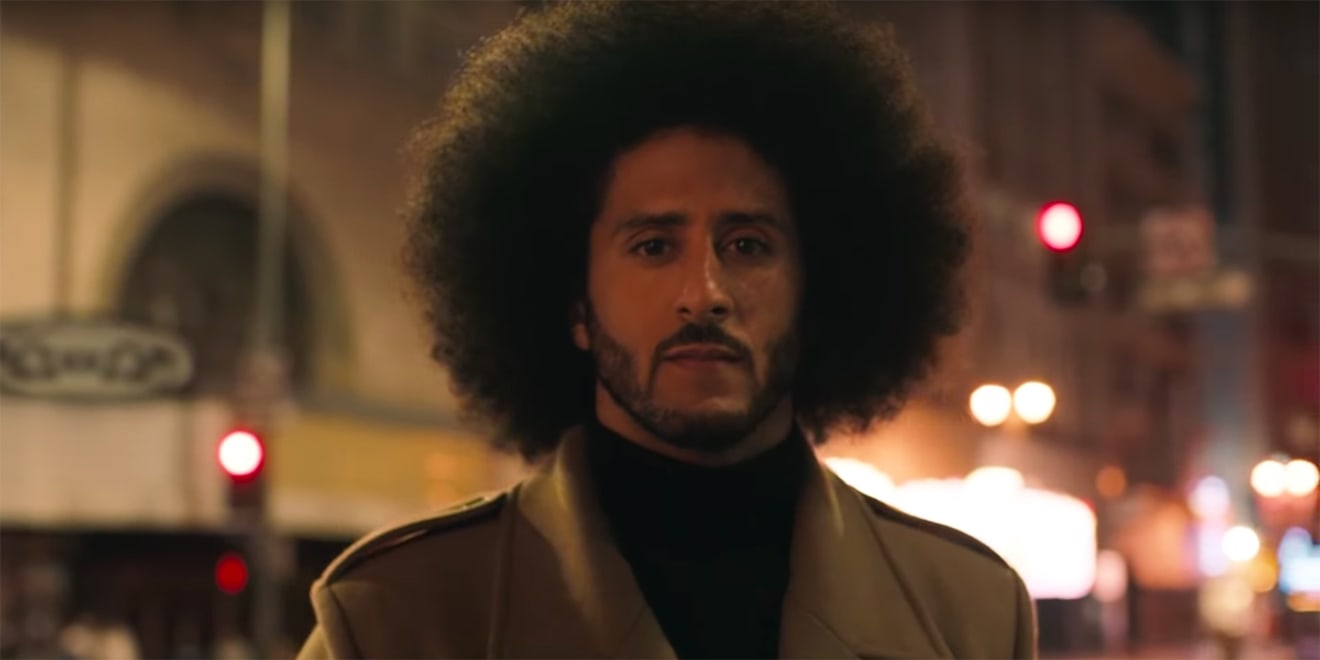 Few were likely surprised that President Donald Trump would tweet about Nike’s polarizing new ad featuring Colin Kaepernick. The only real surprise is that it took him a few days.

But this morning, Trump fired off a tweet that takes digs at Nike and the NFL—though the two brands are, at best, uneasy allies in this scenario given that Nike recently signed an eight-year NFL uniform contract, then partnered very publicly with a quarterback currently suing the league for collusion.

The president’s tweet makes two claims without citing any specific data: First, that NFL ratings are “WAY DOWN.” Second, that Nike “is getting absolutely killed with anger and boycotts.”

Just like the NFL, whose ratings have gone WAY DOWN, Nike is getting absolutely killed with anger and boycotts. I wonder if they had any idea that it would be this way? As far as the NFL is concerned, I just find it hard to watch, and always will, until they stand for the FLAG!

So how accurate is the president’s summary of how these brands are doing in light of the player-kneeling movement that has protested police violence against black Americans?

He’s not technically wrong on either front, in the sense that NFL ratings are indeed down in recent years, and Nike certainly has sparked a notable amount of anger and boycott threats since debuting its Kaepernick ad on Labor Day.

But a look at the data—specifically NFL game ratings and Nike’s financial performance on the New York Stock Exchange—shows that both are in relatively good positions to weather the controversy.

How bad are NFL ratings?

In 2016 and 2017, the NFL saw its overall viewership decline after several years of growth. According to live-plus-same-day ratings provided to Adweek by Nielsen, these were the average total audiences for regular season games (including on NFL Network):

Or, in a slightly more visual chart form: 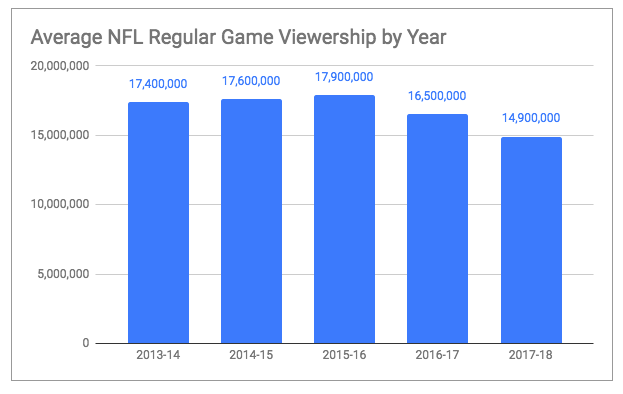 Audience declines of 7.8 percent in 2016 and 9.7 percent in 2017 certainly don’t look good for the NFL, but there’s one other huge factor you have to consider: The TV industry itself has had a brutal few years. Cord cutting and the complete disruption of the industry have rattled ratings across the category.

If you average out Nielsen’s ratings for the four major broadcast networks (ABC, CBS, Fox and NBC) among viewers age 18-49, you can see just how obvious the decline has been in recent years. 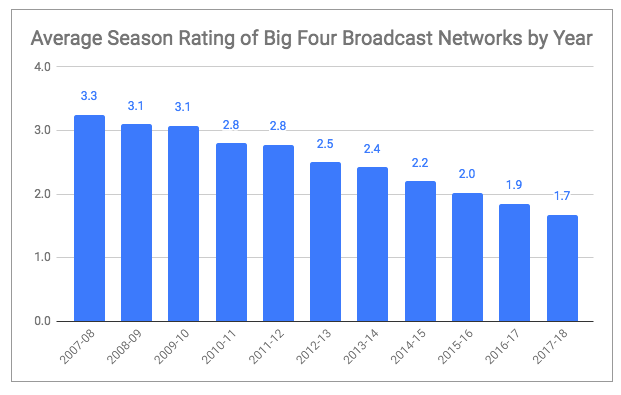 In other words, the average broadcast rating (among 18-49 viewers, at least) dropped 10.5 percent over the past year, while total viewership for the NFL declined 9.7 percent. So even though the NFL had a strong run from 2013 to 2015, it appears to now be caught in the slide that’s affecting TV as a whole.

Also worth noting is that, as TV programming struggles for ratings, NFL games remain strong performers.

Last season, Sunday Night Football was again the No. 1 broadcast prime-time program with the 18-49 demo, with a 6.2 rating. And the season’s most-watched show overall was Fox’s Sunday afternoon America’s Game of the Week package, averaging 22.7 million viewers.

The verdict? NFL ratings are indeed down, but TV ratings are down across the board. Player protests might be a factor in some of the slippage, but likely nowhere on the level of the TV industry’s overall disruption.

What about Nike’s finances?

Nike did not respond to Adweek’s request for comment on Trump’s tweet today, and only time will tell what sort of long-term impact—positive or negative—the brand sees from its Kaepernick endorsement.

That said, Nike’s stock price unquestionably took a hit after the Kaepernick ad’s debut. The share price dipped about 3.9 percent when the market opened Tuesday. But since then, the stock has been holding around the $80 price point, down about 2.7 percent from Labor Day Weekend but not worsening since the initial drop after the ad’s debut.

If that’s as bad as it gets, investors won’t have much to complain about. Nike’s stock has been a juggernaut recently, growing more than 27 percent year to date (that includes the dip after the ad’s debut), while the S&P 500 grew just 9 percent. That might be why some analysts seem unfazed by this week’s controversy.

“Over time, for [Nike], we think the power of the messaging from this new broader campaign is apt to overshadow any potential backlash, near term, in our view,” writes Oppenheimer analyst Brian Nagel.

Another analyst went so far as to say the move is soundly within Nike’s brand and therefore shouldn’t be too surprising to investors.

“This is a company that’s not afraid to take sides,” said Tom Stringfellow, chief investment officer with Frost Investment Advisors. “It’s part of the brand to be controversial and get their name out there.”

Don't miss Adweek NexTech, live this week, to explore privacy, data, attribution and the benchmarks that matter. Register for free and tune in.
@griner david.griner@adweek.com David Griner is creative and innovation editor at Adweek and host of Adweek's podcast, "Yeah, That's Probably an Ad."