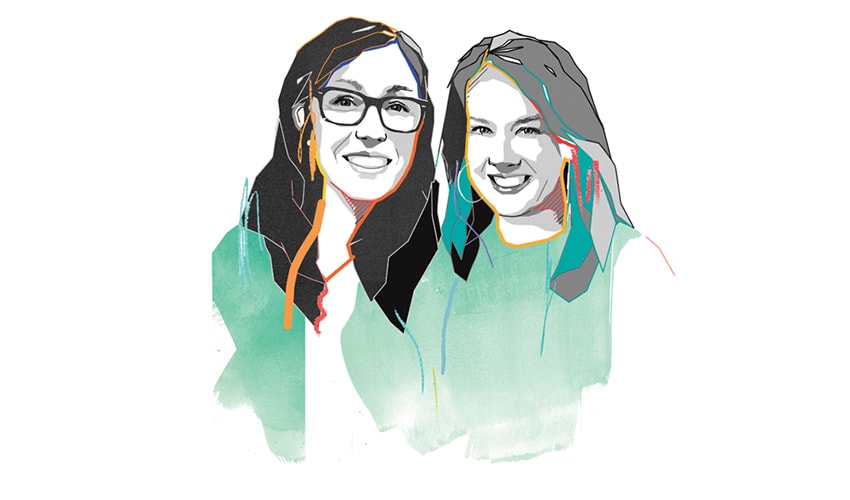 Sims and Johnson interviewed each other on topics ranging from Cannes Lions to the women's impact in the industry. - Credit by Illustration by Paddy Mills for Adweek

In addition to leading two top agencies, Margaret Johnson, CCO and partner at Goodby Silverstein & Partners, and Leslie Sims, the U.S. CCO for Ogilvy, are both multiple Cannes Lions award winners, and both have Southern roots. Johnson went to the University of North Carolina, Sims attended Clemson, and each is an alum of the Portfolio Center in Atlanta. Johnson has been at the San Francisco agency for 23 years and has had a hand in some of the agency’s most significant work, including Cannes Lions-winning campaigns for Nike, Häagen-Dazs, Logitech, Doritos and Xfinity. For her part, Sims, a multiple Lions winner herself, recently began her journey at Ogilvy and has made her creative mark for the likes of Staples, Xerox, Ikea and IBM, among others.

Brandweek got Johnson and Sims together to interview each other on topics ranging from the state of Cannes Lions (Johnson is the president of this year’s film jury, and Sims is on the Titanium jury) to talent, the continued impact of women in the industry and more.

Margaret Johnson: You’ve been on Cannes juries—how have juries changed now that they’re closer to 50-50 male-female?

Leslie Sims: I’ve only been on juries since they instituted iPads for voting, not on one where you had to raise your hand to vote for things. As I understand it, people would get really aggressive and gang up on other jurors to influence their votes. I think that’s a remarkably positive change.

Related to gender … in the past, there were fewer women on juries, and we would take turns calling out some of the more misogynistic work. It was tiring having to do that, and now it feels like there is less of that. Agencies appear to be better at paring that down before it gets to Cannes, and I think we are seeing much less controversial work. It feels like there’s a more evenly represented jury in the room, and the work is coming from a much more balanced place.

Johnson: I agree. I think that’s been the most significant difference. Because you have two different perspectives, the work is more interesting than it has been historically. Looking back a few years ago, it was all very similar, but now we’re seeing much more dimension.

Sims: The [gender tropes] are going away, so it makes for less effort in the jury room to have to feel like you’re representing your gender and you’re able to decide what work you believe deserves to be recognized based on its creativity.

Here’s a question for you, Margaret: What are you most looking forward to being the Cannes Lions film jury president this year?

Johnson: I’m excited because this is my first time being a jury president. But I also feel like this is the most competitive category at Cannes, and I feel like the best storytellers in the world are telling them in this medium. What I’m least looking forward to is being in the South of France and being locked in a dark room for hours … and not on a boat headed to St. Tropez.

Sims: The biggest learning experience I had was the first one I went to. I had a lot of brand clients there when I was an ecd, and our CEO said, “Your one thing for the week is that you are hosting a cocktail hour on the Carlton terrace. You will be spending time meeting some of your new clients.”

So the party is on Thursday at 5 p.m., and remember, this is my first Cannes.

So I got onto the boat, and we got to St. Tropez at 3:45 and I start having serious panic attacks that I’m not going to get back in time.

Now, there’s no better place to have a crisis go down than on a beach full of producers. Within five minutes, they told me that they had a helicopter coming and that there would be a car waiting for me in Cannes to go to the Carlton. I showed up just a little bit after five. To this day, I have no idea who paid for it, but they helped me avert a complete disaster.

Oh, and I’ve never gotten on a boat since at Cannes. My advice to anyone who is there with clients is to not get on a boat or a shuttle bus unless you have nowhere to be for the next 12 hours.

Johnson: It’s funny you mention clients. There are so many more clients at Cannes now. What do you think of that?

Sims: I think it’s positive because, hopefully, you’re with your clients there and they can see what different markets are doing. Sometimes Asia, for example, is doing something fresh and very different than the U.S. It’s really great to be there and look at different solutions—maybe it’s a similar product—but approaching it a different way.

Also, it’s great to be there looking at creative together for a week. I think we end up blending it with business performance and data, but it’s nice to have them there to make it about creativity.

Johnson: So true. Once clients get to Cannes and see all of this amazing work from all over the world, you can’t help but leave inspired and wanting to make the work that your agency or brand is putting out in the world better.

Are you on a jury this year?

Johnson: Ohhhhh. That was one of my best memories! My first judging experience was on the Titanium jury with Dan Wieden as president.

Sims: What won the grand prix?

Johnson: It was Prudential.

Sims: I’m psyched. I’ve never been on that jury.

Johnson: Well, you’re looking at the crème de la crème because the stakes are so high.

Sims: It’s really quite the jury [this year]. [FCB global CCO] Susan Credle and [Wieden + Kennedy ecd] Susan Hoffman are on there. And [BBDO chairman and CCO] Dave Lubars is the jury president.

Johnson: In some ways, [becoming CCO in 2016] felt very natural, since I’ve been here for over 20 years. There’s a certain familiarity with the agency, and I know what the expectation of the work that is coming out of this place is. I think after getting into it, the same thing freaked me out—I know what the expectation is and I’m the one responsible, so it’s a double-edged sword.

Sims: That’s great. I’m curious, being in San Francisco, how do you retain your best talent from going to the Facebooks and Googles of the world?

Johnson: If I’m honest, that’s something we struggle with because a lot of tech companies can make it very attractive. But I think it can be hard for creative people who have worked in agencies because one of the upsides of working at an agency is that you get to learn about so many different things. I think it can be hard to take the monotony of getting on a bus and riding an hour and a half each way to work and then working on the exact same thing every day.

It’s not for a lot of people, and we have a ton of what we call “boomerangs,” where they leave agencies, work for the tech companies and they come right back because, at agencies, creativity is number one. Creatives in agencies are rock stars. At tech companies, engineers are the rock stars, and that’s a bit of a struggle for people.

Sims: We lose a lot of people to Google in particular because, as you said, they make it attractive. Then they get there and note how engineers are at the center. We over-index for people who are pure creative artists that understand how to apply creativity to brands—and I like to think it’s a little magical. The people who do best are really drawn to advertising to help solve business problems for brands creatively. Those people who went to Google and came back end up becoming great advocates because they talk about why they came back and it’s good for the creative department to hear that.

Johnson: I want to go back to the work for a second and, specifically, scam work [ads created not for client business, but specifically to win awards].

Sims: Well, I think there is so much out there that isn’t on our clients’ brands. When I was at Y&R, and now that I’m here at Ogilvy, there is a mindset that we’re going to focus on our biggest brands and do everything we can to keep a strong culture in the building—and make sure that people are happy and putting their best thinking to our biggest brand clients. I’m hoping that we’re not going to see as much of the scam work. That said, there may still be online films, for example, that don’t need to have paid media behind it—and it doesn’t mean it shouldn’t be recognized as long as it has the right sentiment behind it.

Johnson: I’m curious about your thoughts on agencies that were either founded by or led by women and the impact it’s having on work for clients and brands.

Sims: My experience has led me to some great places led by women. When I was at McCann, the creative department was run by two women, Nina DiSesa and Joyce King Thomas, which meant that I was working in an ecosystem of people who recognized a woman to be in charge. And we’ve seen agencies like Wells Rich Greene, which was founded by Mary Wells, as an excellent example of balancing out the ratio, which overall leads to better work. I’m paraphrasing, but [Wieden + Kennedy CCO] Colleen DeCourcy promised that, no matter what, everyone there would be safe … meaning that as a creative department, they are a collection of provocateurs, pushing the boundaries for brands, but not inappropriate in a way that’s going to diminish others.

Johnson: So true. You want that yin and yang, because, without that tension, the work is just not as interesting. You need something to bump up against.

Click for more from this issue
This story first appeared in the June 17, 2019, issue of Brandweek.
@zanger doug.zanger@adweek.com Doug Zanger is a senior editor, agencies at Adweek, focusing on creativity and agencies.