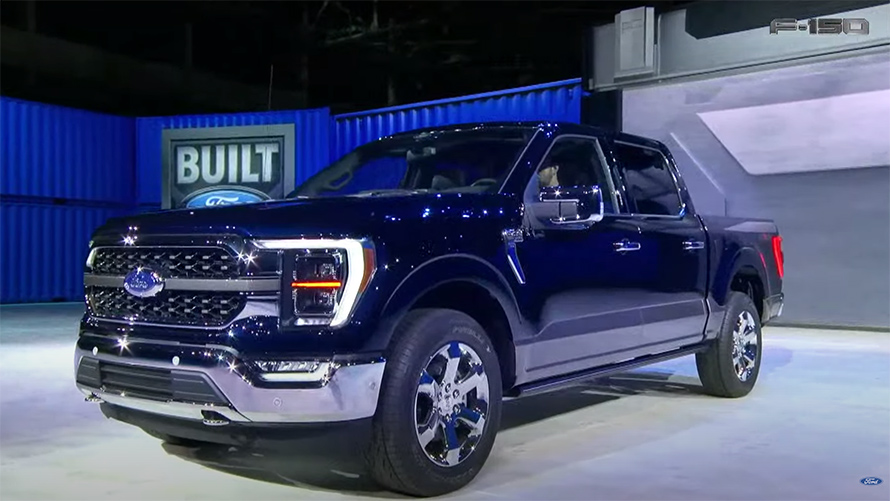 Ford has officially announced the next generation of the F-150 pickup truck, the best selling vehicle in the U.S. for more than 40 years.

In a digital reveal hosted by former Ford pitchman Denis Leary, who provided the brand’s voiceover from 2007 to 2018 (“If I could I’d have the F-150 as the best man at my wedding, I would,” he quipped), the brand revealed that the 2021 Ford F-150 would feature lay-flat sleeper seats and “over the air” updates, similar to software patches received by cellphones, and a 12-inch touchscreen display in the center console.

It’s also now the only full-sized pickup that offers hands-free driving. Visually, a Ford executive described the new pickup as having a “tougher, more planted look.”

The F-150 is a staple in Ford’s lineup. The F-series generated nearly $42 billion in revenue, selling 900,000 pickups, falling just behind Apple’s iPhone as the most profitable consumer product in the U.S. by revenue, according to a survey commissioned by Ford and first reported in Bloomberg.

There’s a lot riding on the launch of the vehicle, as the rest of the auto industry hopes to put the Covid-19 pandemic in the rearview mirror. During the first quarter of 2020, new vehicle sales fell nearly 38% in March according to the National Automobile Dealers Association.

Ford lost an estimated $2 billion in the first quarter of 2020. To weather the pandemic, the carmaker has taken on $8 billion in debt.

In May, Ford launched a new campaign, “Built for America,” emphasizing its contributions to frontline responders, including the production of nearly 100,000 ventilators and 14 million face shields distributed to all 50 states.

Before the launch, Ford vp of marketing, sales and service Mark LaNeve said the new F-150 is about providing the vehicle’s diehard fans with something new to get excited about.

“With the F-150, we’ve been in the market for many years, the leader in the market for 43 years, so we know the truck market, we know our customers, we live with them right on the worksite,” LaNeve said. “Every generation, we try to raise the bar.”

The last time the F-150 got a major overhaul and redesign was 2015. A completely electric version is expected to launch in the next two years, LaNeve said.

“The F-150 is without a doubt Ford’s most important product, by far,” said Chris Cedergren, a marketing consultant in the automotive industry. “You don’t really have to deviate from what you’ve done in the past because at the end of the day, people are really focused on what the product is going to give them.”

Like nearly every other industry, ad spend in the auto industry nearly stopped during the pandemic, but LaNeve anticipates a return.

“[Ad spend] will come back as the revenue comes back,” he said. “Some of our ad spend will certainly come back. I think April was the low point and hopefully, it improves every month through the end of the year.”

The following weeks are big for the auto brand. After the release of the F-150, the brand is expected to release one of the most anticipated vehicles of the last decade: the Ford Bronco, which ceased production in 1996.

“We’re bringing back an iconic vehicle, but we’re also establishing a new brand,” LaNeve said. “We’re really excited about it.”

Following other brands, Ford announced in 2018 that it was exiting the sedan market, leaving only its Mustang brand. The Bronco brand will see Ford continue to compete in the off-road category alongside Jeep.