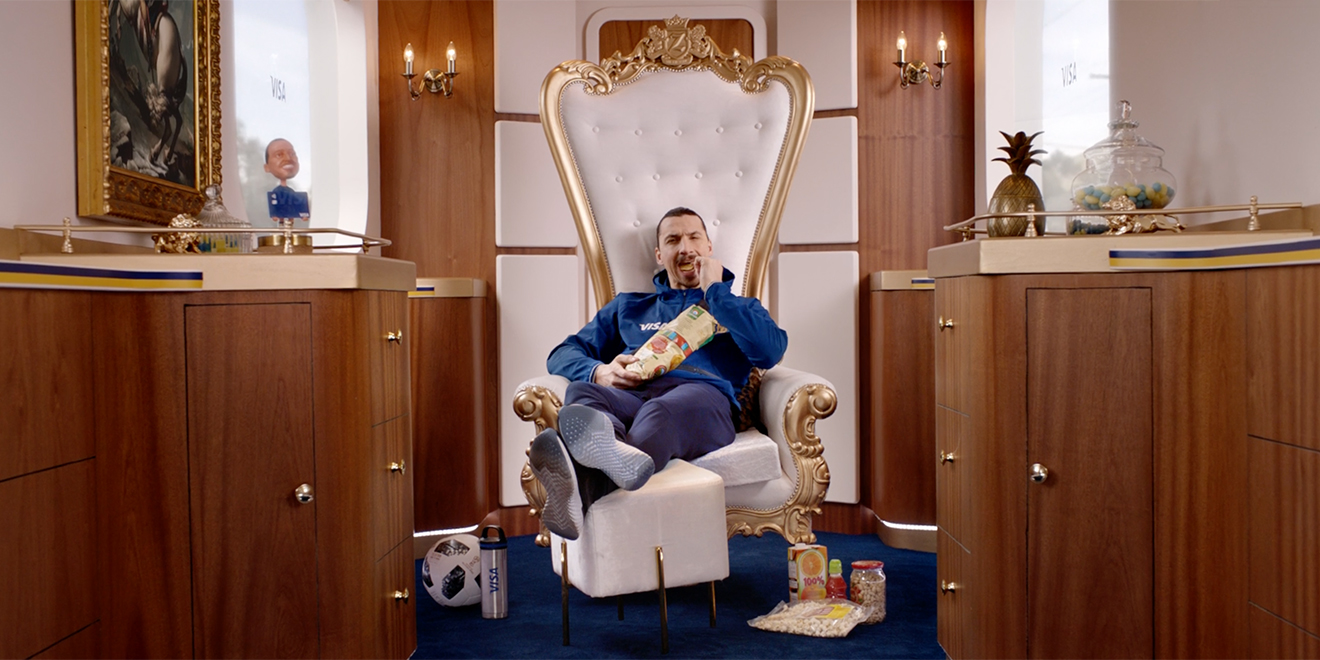 Get ready for World Cup mayhem, even if you can't actually be there. - Credit by Visa

Some people are lucky enough to attend the World Cup in person, but for many, watching it on TV is the next best alternative. Visa’s latest global marketing campaign is aimed at making all sports fans feel included in the tournament, even if they aren’t able to get to Russia to watch the madness unfold.

Over the course of the coming months, Visa will roll out a series of films tied to the World Cup, which starts on June 14. The first film stars international football star Zlatan Ibrahimović (formerly of Manchester United and Paris Saint-Germain, currently with L.A. Galaxy). While Ibrahimović won’t be playing for an official team this year, he still wants to do absolutely anything he can to get to Russia in Visa’s first World Cup spot.

“Around 90 percent of people in the world have heard of the World Cup, and yet only 1.5 million are actually able to go to the game, no matter where they are. That led to the insight that there is a little bit of FOMO [fear of missing out] and wanting to actually be part of the game, even if you are not at the game,” Lynne Biggar, Visa CMO, said. “That dovetailed nicely with the way we think about Visa, which is everywhere you want to be and it led us to this campaign about our ultimate World Cup and FOMO.”

The campaign will roll out in 45 markets (with 30 markets getting the first look today) in 24 different languages. In total, the campaign will span TV, print, digital, social, out of home and more.

“We created the campaign in somewhat of a modular way, such that we can support the key priorities and initiatives at a market-by-market level, while it still ladders up to a global campaign and a global theme about how Visa enables you not to have FOMO,” Biggar said.

A big component of the work this year comes from a group of six influencers (including Ibrahimović), as Visa’s marketing chief noted that influencer marketing is a key for any brands, “because engagement often with influencers is higher so we’ve been very thoughtful in how we selected these influencers.” Visa will work closely with influencers from Germany (freekickerz), Japan (Kotaro Tokuda), Mexico (Pamela Allier), Russia (Tatiana Vasilieva) and the U.K. (Chris MD) on the World Cup push.

In the coming months, Visa will leverage its own social media accounts, as well as its influencer partners, to hype fans up for the event and give them a behind-the-scenes look at the World Cup. Closer to the World Cup kick off, fans will have a chance to get a look at the pitch, the locker rooms and more.

Visa has a pretty extensive plan for its marketing campaign, but will have an equally hefty presence on the ground this year too.

“We look at the World Cup as a venue for testing new initiatives and really providing fans a look into the innovation that Visa is known for through unique ways to pay like payment bands, payment rings and then some commemorative prepaid cards, all of which folks will see at the stadium,” Biggar added.

Visa is the exclusive payment service at all stadiums where games will be played. Additionally, the brand will give fans in attendance a chance to pay for their merchandise and concessions in a quick, easy and cash-less way, providing 6,500 payment rings, 30,000 payment brands and commemorative contactless prepaid cards.