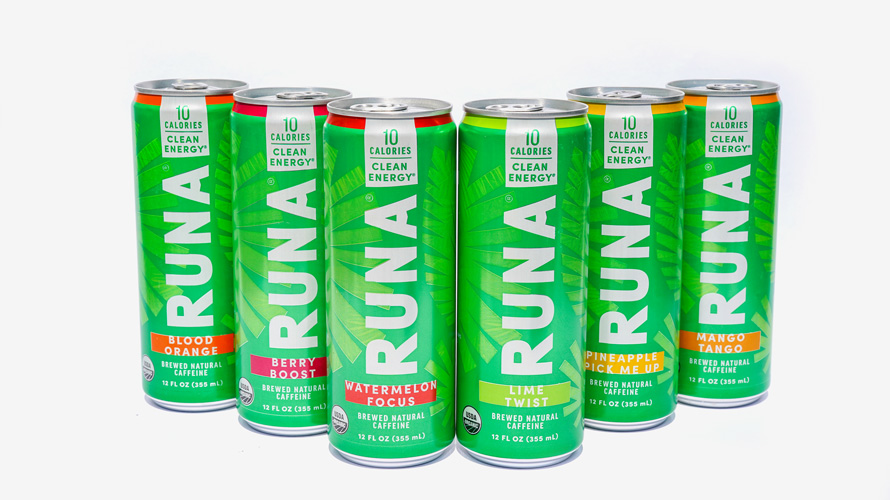 Each 12 fluid ounce can of Runa, which comes in six flavors, contains 10 calories. - Credit by Runa

Energy drinks as a category are anything but lethargic these days.

Led by Red Bull and Monster Energy, who together control over 75% of the market, U.S. sales of energy drinks hit $14.2 billion in 2019, up 41% compared to 2014, according to Euromonitor. The pandemic isn’t slowing things down, either: Last month, Monster reported that revenue from the U.S. and Canada for the quarter ending March 31 climbed 6.2% to $733 million.

This rate of growth has attracted the interest of beverage giants Coca-Cola and PepsiCo, both of whom have recently moved into the energy space. In January, Coca-Cola debuted its first energy beverage, Coca-Cola Energy, and promoted it with a Super Bowl spot starring Jonah Hill and Martin Scorsese. In March, PepsiCo announced plans to acquire Rockstar Energy Beverages for $3.85 billion, followed by news in April that it would become the exclusive U.S. distributor for the fast-rising Bang Energy brand.

Consumer demand for an extra boost throughout the day—whether that comes from a can of Red Bull or cup of coffee—is clearly strong. But Vita Coco’s parent company, All Market Inc., believes a substantial segment of the population wants to get it from a healthier source—one that won’t end with a sugar crash.

Today, All Market Inc. announced it has updated its energy drink brand Runa with a tweaked formulation and new design in hopes of capturing this slice of the market. The company that got people to embrace coconut water is now aiming for another victory. 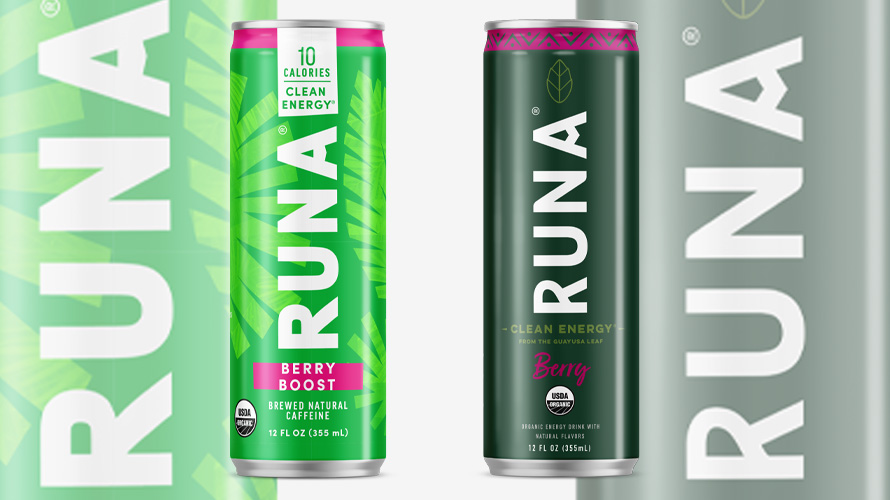 Runa's new product design is on the left; its old design is on the right.
Runa
“The natural energy category is small and emerging, but in the long run we believe that it can have a big role in the energy space because the need state of energy is not going away,” said Jane Prior, CMO of All Market Inc.

The company acquired Runa in 2018. Back then, the brand had two versions of its hero product, zero calorie and 70 calorie. Consolidating the two lineups, the new Runa comes in one 12 fluid ounce can that contains 10 calories. An 8.4 fluid ounce can of Red Bull, by comparison, contains 110 calories. Runa derives its energy from the guayusa leaf, an antioxidant and caffeine-rich plant found in South America, and only features ingredients “you can pronounce,” said Prior.

While energy drinks have, by and large, remained impervious to any health trends impacting other CPG food-based manufacturers, Prior believes that time will come.

“We spoke with our customers and they told us that they were frustrated with the empty calories, high sugar and overall lack of nutrition in leading energy and coffee drinks,” Andrew Thomas, Soylent’s former vp of brand marketing, told Adweek in March. “We saw an opportunity to deliver the energy that people are looking for.”

As for the new packaging, Prior said they went with a bright green look with leaf imagery to convey clean energy coming from a natural source. They also wanted to make something that was easy for consumers to understand and identify.

“We had two propositions on the shelves that were sort of splitting our shelf presence, which is not ideal for a brand that is so small and new,” said Prior, referring the Runa’s old zero-calorie offering, which came in a white can, and its 70-calorie product, which came in dark green.

The new Runa comes in six flavors, such as Mango Tango, Watermelon Focus and Pineapple Pick Me Up. The product is available for purchase on Amazon and in national retailers such as Kroger, Target and Albertsons.

Introducing a whole new way to power through your day. Good energy isn’t just for your body. It’s for all of us. Meet NEW Runa the good, clean, energy. #PowerFromAGoodPlace