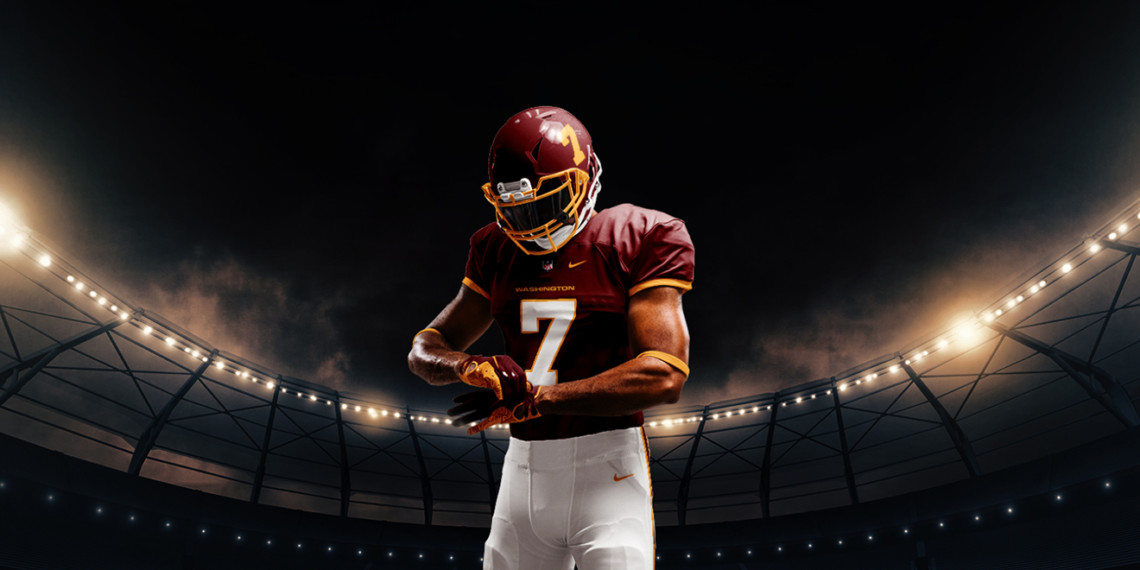 The team finally bowed to decades of pressure and protests over its former name, revealing a bland but temporary new look Thursday. - Credit by Washington Football Team

Sports fans and activists alike have been breathlessly anticipating the new name of the franchise ever since it announced in July that it would drop the controversial name. On Thursday, the team finally made its move—at least temporarily—and rebranded everything from its social media handles to its uniforms.

While the team still hasn’t chosen a new permanent moniker, it moved to erase the word that Native American leaders and activists have long said is both a racist slur and a painful reference to a history of state-sponsored genocide against indigenous people.

The change was reflected in a social media redesign and a reveal of new uniforms, which keep the burgundy and gold color scheme. The team logo no longer features a disembodied Native American head, replacing it on each player’s jersey with their number.

Fans quickly responded online, with many joking about wearing blank T-shirts to rep their beloved team and others celebrating the long-awaited rejection of the former name. Players jumped into the conversation as well, with Washington quarterback Dwayne Haskins Jr. joking that the former fan hashtag #HTTR (Hail to the Redskins) would now become #HTTWFT (Hail to the Washington Football Team).

Reaching across leagues, NBA’s LeBron James mocked the team’s “thorough” and “intense” review of potential names that led to one of the blandest letdowns in sports history.

According to ESPN reporter Adam Schefter, who first reported the name change on Thursday, the team plans to use its temporary moniker through the 2020 season. In the meantime, it will “be seeking the feedback of players, alumni, fans, sponsors and the community for the new team name it will use at some point in the future,” said Schefter in a tweet.

In early June, the Native American leaders issued a response to the name. A month later, a letter from investors and shareholders asked three corporate sponsors (FedEx, Nike and PepsiC0) to divest from the team, a move that heightened public awareness of internal and external pressures on the team. FedEx, which owns naming rights to the team’s stadium, told Adweek the next day that it had asked the team to change its name.

As of today, the NFL’s online store is still selling merchandise with the Washington Redskins logo, but those will soon be replaced with a new line of products that read “Washington Football Team, Est. 1932” alongside a new logo.