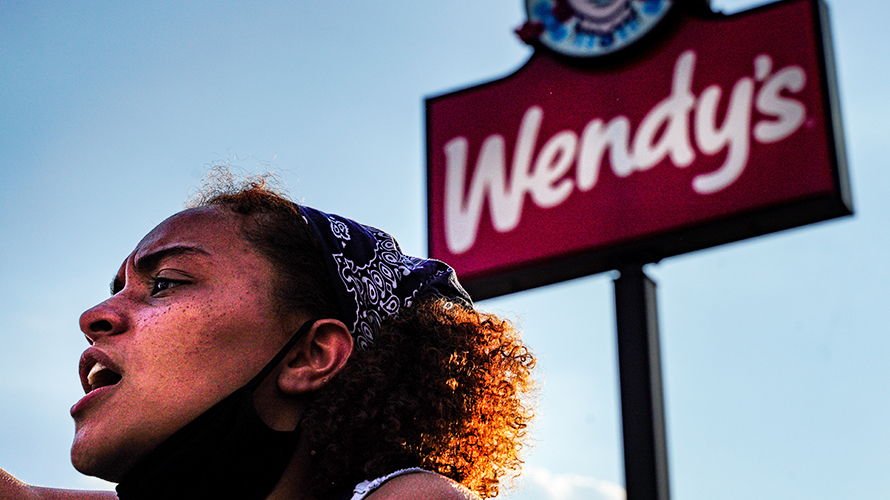 A woman protests against the fatal police shooting of Rayshard Brooks at an Atlanta Wendy's, which was later burned. - Credit by Ben Hendren/Anadolu Agency via Getty Images

Two days later, the fast food chain retweeted a single post from its own community partner, the Thurgood Marshall College Fund, about a $500,000 Wendy’s donation to the fund.

And then the Wendy’s Twitter account went silent. It continued to reply to customer service issues but stopped posting or sharing any other content. Some Twitter users puzzled over the silence—where were the amplified voices the brand had promised?

In the coming days, we’ll be using our Twitter account to amplify Black voices. Because what’s the point of this big platform if we don’t use it for what matters during times like these?

Twitter/Wendys
Then on Friday, June 12, Atlanta police shot Rayshard Brooks to death in a Wendy’s parking lot after he’d been found apparently inebriated in a car and resisted arrest. The location was burned to the ground during a protest the following night. The two police officers involved, Garrett Rolfe and Devin Brosnan, were charged today—including one count of felony murder for Rolfe, who was fired from the police department soon after the shooting.

Through all of it, the normally snappy, engaging Wendy’s social media presence has remained unusually quiet. While Wendy’s CEO Todd Penegor issued a memo to employees on Sunday saying “the tragic death of Rayshard Brooks, and the pain this has caused, saddens us all,” the brand’s public face appears to have ghosted the public. Aside from customer service replies, it hasn’t posted on Twitter since June 3 and hasn’t posted on Instagram since late May, and the promise to amplify Black voices appears to have been broken.

Not as loud as the people though.

Opponents of the Black Lives Matter movement were quick to jump into Wendy’s replies to mock the brand for supporting the Black community, only to have one of its locations burned after the death of Brooks—though it has since been announced by Atlanta authorities that both suspects being sought for the Wendy’s arson are white.

Adweek reached out to Ketchum, which handles PR for Wendy’s, and to VMLY&R, its creative agency of record whose digital and social work for Wendy’s has received global accolades including the first Social and Influencer Grand Prix at Cannes Lions. Neither offered comment on the social media silence.

A request emailed to Wendy’s asking for clarification on the social media silence as well as the promise to amplify Black voices did not receive an immediate response.

But multicultural marketing experts have their own take on why Wendy’s walked away from its pledge, and on what the brand can do to bounce back from the silence.

Jocelyn K. Allen spent 15 years at General Motors, including directing GM’s diversity marketing, before founding the Allen Lewis Agency with partner Chandra S. Lewis. Allen said she has always loved the Wendy’s Twitter presence, but thinks the brand may have jumped the gun.

“There’s a lot of what I’m calling ‘copycat conciliation’ going on right now,” said Allen. “Companies are jumping to do something, but not necessarily vetting their options, not considering long-term strategies and consequences. It looks as though Wendy’s might have fallen prey to that.” 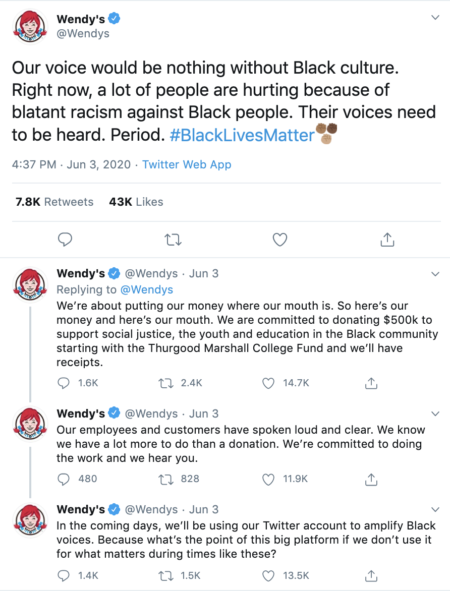 Twitter/Wendys
“They can come back from this,” advised Allen, “But they’re going to need to be thoughtful and transparent.”


While the public-facing social media arm of Wendy’s has remained mute, the company did address the Atlanta shooting and arson, as well as the impact on the franchise and its employees, in Sunday’s internal memo.

“The local franchisee who owns this restaurant is ensuring that employees displaced from work will continue to be paid and will have the option to remain employed at other restaurants in the area,” Penegor wrote in the memo. “Wendy’s is also making funds available through WeCare, our employee assistance program, to any restaurant team member in our system who may experience a financial loss due to short-term restaurant closures or disruptions.”

Gwendolyn Kelly, president and CEO at NWA Events Unlimited and former diversity executive at Walmart, told Adweek that Wendy’s is likely “taking time to be assured that what they are saying is truly what is meant to be said.”

“My guess is that Wendy’s may not have the internal voices in the organization to craft that statement and future work,” said Kelly. “They may be in the seeking mode and consequently [creating a] delay as adequate counsel is being sought.”

In a somewhat prophetic post, one of the brand’s last tweets from June 3 seems to share that same perspective:

Join the foremost brand marketers, such as Marc Pritchard of P&G, Brad Hiranaga of General Mills, Kory Marchisotto of e.l.f. and more, for Brandweek Masters Live on Sept. 14-17. Secure your pass today. Early-bird rates expire 9/1.
@MaryEmilyOHara maryemily.ohara@adweek.com Mary Emily O'Hara is a diversity and inclusion reporter. They specialize in covering LGBTQ+ issues and other underrepresented communities.