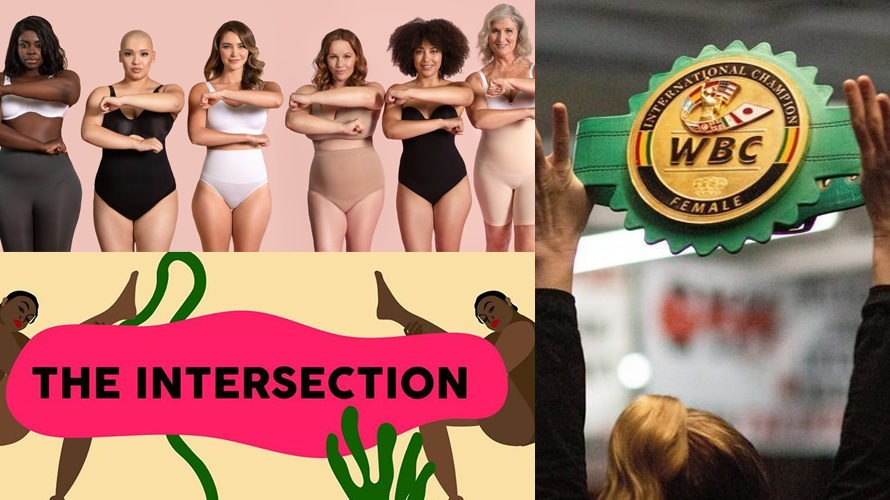 International Women's Day is March 8, and brands are making the day with new campaigns. - Credit by Shapermint, Everlast, Wieden+Kennedy Amsterdam

March is Women’s History Month—the month when, traditionally, brands turn everything pink to convince women that they care. On top of that, today is International Women’s Day. So if a month is too long, brands also have the opportunity to send their empowerment message on one special day.

And this year—as Orangetheory pointed out in its woman-themed spot—International Women’s Day falls on the first day of daylight saving time, meaning that it’s only 23 hours long. So, it’s really only almost a day.

Here’s a roundup—by no means comprehensive—of what some agencies and brands are doing to celebrate women this month.

What do women want?

Several brands and agencies have turned their participation in the month- or daylong festivities into a data-focused endeavor. WPP agency Berlin Cameron teamed up with market research firm Perksy to see how women felt about the way brands treat IWD—and they didn’t look kindly on any companies still pink-washing their initiatives in March.

The poll, which included more than 1,000 women ages 13-75 found that 90% think women should be celebrated year round. Beyond that, 30% said they think brands advocating for women in ads are just trying to drive sales. It proves that “one month of women-focused initiatives aren’t enough to make women feel seen and heard,” said Berlin Cameron president Jennifer DaSilva. “If brands want to show real support for women, they must find ways to celebrate them every day of the year.”

International consulting firm Kearney found a similar sentiment in its 2020 Women Consumers Survey, released just in time for IWD. Over 75% of women surveyed said they’d pay more for products that truly support the advancement of women, but walk away from brands they don’t see helping a cause.

The global state of womanhood

Equal Measures 2030 also released data in time for IWD, but its report, Bending the Curve Towards Gender Equality by 2030, focused on the state of women globally—and how much more work must be done to reach the United Nations’ sustainable development goals by the 2030 target.

Half of the countries studied, home to 2.1 billion women, won’t hit five key gender equality targets by 2030 if they stay on their current trajectories, according to the report. Those targets include access to contraception, girls’ education, political leadership, workplace equality and safety.

Equal Measures 2030 is made up of a coalition of organizations such as the African Women’s Development and Communication Network, the Bill and Melinda Gates Foundation and the International Women’s Health Coalition.

“Far too many countries have been stagnating or even backtracking on vital issues that affect the lives and futures of billions of girls and women, such as whether they finish school or if they have equal rights at work,” said Alison Holder, director of Equal Measures 2030. “Globally, progress towards gender equality is limping along.”

The best and worst states for women

Washington D.C.-based personal finance website WalletHub also took a data-driven approach to IWD, focusing on the ways that different metrics can affect the overall experience of women state by state.

Taking into account things like median income, unemployment rates, uninsured rates, life expectancy, political representation, education rates and the number of women-owned businesses, WalletHub ranked all 50 states. Massachusetts, it determined, is the most women-friendly state, followed up by Minnesota, Iowa, Maine and Colorado. The bottom five were Oklahoma, Alabama, Arkansas, Mississippi and Louisiana.

Breaking down barriers in the workplace

Employment-related search engine Indeed zeroed in on the roadblocks women face at work. Based on a survey of 1,442 women in the U.S., the company compiled a list of most common barriers to women’s success in the workplace.

While most respondents said that managers have the power to make or break a job situation, minority women said that mentorship and sponsorships played a significant role in their advancement. Among Latina respondents, 50% said a mentorship contributed to their success and growth. Almost one in five black and LBTQ+ participants said sponsorship played a crucial role in their success. 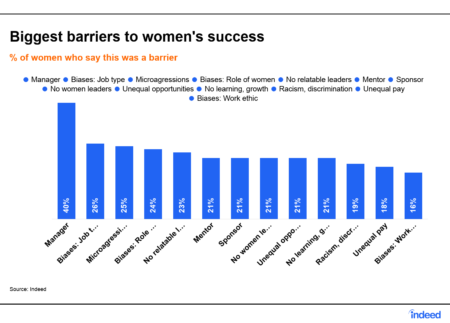 Women ranked managers as the most important indicator of success.
Indeed
@klundster kathryn.lundstrom@adweek.com Kathryn Lundstrom is Adweek's breaking news reporter based in Austin.