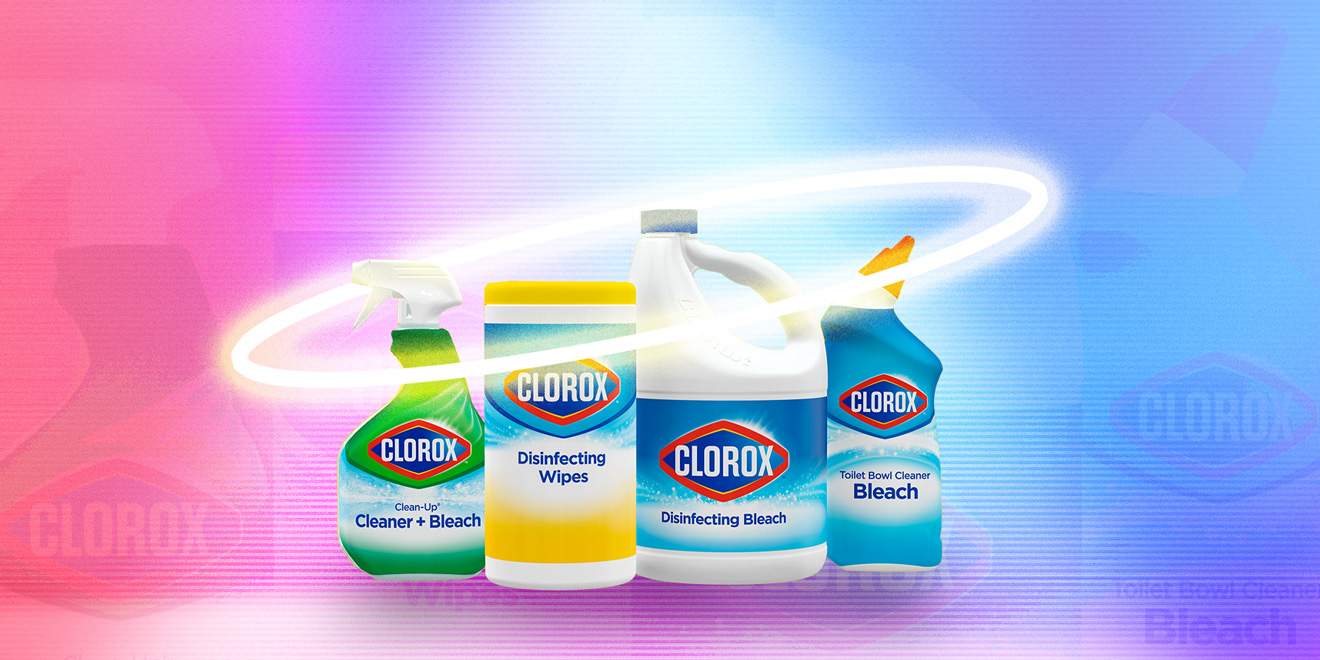 Consumers are desperate for Clorox, and so are brands.

More valuable than the disinfecting wipes and sprays, though, has been the sense of safety and security that’s become wrapped up with the Clorox brand. In late May, for instance, a Harris Poll found that U.S. consumers ranked Clorox second on a list of the most essential companies during the pandemic. Only the United States Postal Service placed higher.

And it’s that aura of protection against the virus that other businesses badly want a piece of—especially as people start reemerging from their homes.

Since the outset of the Covid-19 pandemic, Clorox has had no trouble moving product. The Clorox Company’s cleaning segment experienced a 32% year-over-year sales increase throughout the opening quarter of 2020, helping boost the firm’s share price 35% since March 13, the day the White House declared the novel coronavirus a national emergency. But branded partnerships with major businesses sends a clear message to consumers that the Clorox name represents peace of mind. 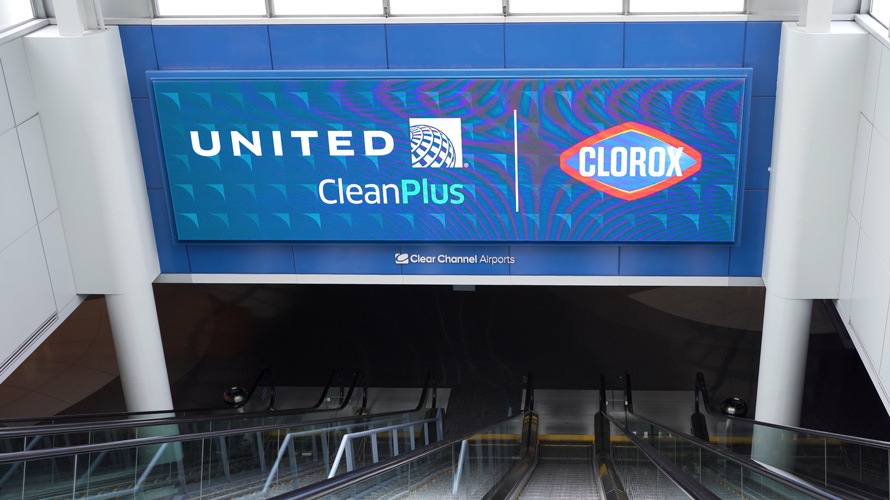 Everyone is pitching Clorox

“At this point in time, we are evaluating and reacting to all different types of partnerships,” Jonsson said. “It needs to be a partner that is serious about their cleaning protocol and serious about making their respective space safe for their guests.”

So far, Clorox has announced partnerships with United Airlines and Uber, which the company plans to provide with disinfecting tips and cleaning supplies for both drivers and riders. News of a similar arrangement with AMC Theatres is expected soon.

United approached Clorox in March, when travel demand was just starting to crater under the weight of the pandemic, cutting airport foot traffic by 95%. Despite announcing its partnership with Clorox in late May, the airline won’t be using Clorox exclusively—at least not until early fall, when it’s worked through its existing supply of cleaning products.

While United was already using Clorox’s products for some of its cleaning efforts, it will expand its relationship as part of the new deal. That involves using Clorox’s industrial-level spraying device, the Clorox Total 360, to clean gates and baggage claim areas. In a May earnings call with analysts, The Clorox Company’s chief executive, Benno Dorer, said demand for its Total 360 sprayer will likely be 500% higher this fiscal year than last year. As part of the partnership with United, Clorox is also looking into providing the airline with disinfecting wipes.

“I don’t want to say we compete on safety; that’s definitely not the attempt—we want all airlines to be safe,” said Maria Walter, managing director of customer insights and innovation at United Airlines. “With that being said, being able to work with a partner like Clorox is a really great opportunity for us to differentiate within the airline sector.” 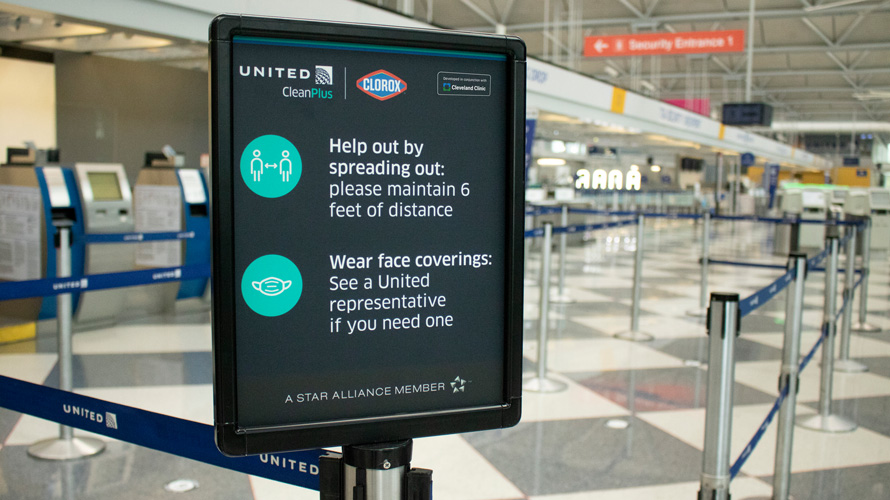 As part of the deal with United, Clorox is looking into supplying the airline with disinfecting wipes.
Clorox

It’s a great marketing opportunity for Clorox, too. While Clorox has a b-to-b operation, which services hospitals and health care facilities, there’s little reason the average consumer would know about it. Making these arrangements more public through new partnerships will change that, as giant corporations putting their trust in Clorox as the authority on cleanliness can only rub off on consumers entering and exiting a space. Plus, demonstrating to someone that a product works often proves more persuasive than merely telling them.

“The experience of it is the key,” Jonsson said.

Unlike other co-branded partnerships, which can leverage an airline’s treasure trove of loyalty membership data by allowing brands to market directly to travelers’ inboxes or through paid placement, Clorox won’t get that access.

“That is not something that is a part of the arrangement,” Walter said. “We’re not doing any marketing on behalf of Clorox other than what you see in the supply chain.”

United declined to say whether the partnership was for multiple years or exclusive on either end. No other airline has a partnership like it currently in place.

One wrinkle in the plan is that due to the high demand for Clorox’s disinfecting wipes and sprays, there’s a limited supply for both consumers and companies. Jonsson noted that even though factories are running around the clock and third-party manufacturers are increasing output, Clorox is still having trouble keeping up. In the first quarter of this year, Clorox made 40 million more disinfecting products than the same period last year, a 40% boost in production.

“We need to make sure that we work with partners that are patient to start small, test and then, ultimately, as more product becomes available, scale those partnerships up and make them more comprehensive,” Jonsson said.

That constrained supply chain is part of the reason Best Western, which operates nearly 4,700 hotels internationally, hasn’t chosen a co-branded partnership. One of its competitors, Hilton, sided with Lysol for what it is calling Hilton CleanStay with Lysol Protection. (Lysol declined to comment for this story.)

“When you think about Covid, the No. 1 is to move quickly,” said Dorothy Dowling, CMO and senior vice president for Best Western. “Sourcing strategies and being able to deliver on product execution is really important.”

Trouble keeping products on shelves has also led Clorox to adjust its approach to advertising. While its marketing spend hasn’t changed, Jonsson said, the company has moved away from promoting products in favor of enhancing its reputation.

One spot, “Help Spread Protection,” which debuted in late March, lists ways people can help slow the spread of Covid-19 while showing people spraying and wiping surfaces around the home. Clorox also partnered with the social platform Nextdoor, which connects people with their neighbors, who might want to borrow a hammer, need help buying groceries or just have someone to chat with. The ad supporting the service came out in April.

Similarly, Lysol is running a commercial called “Questions,” which involves a superimposed search bar filling up with people’s queries of what Lysol can be used for. Lysol’s parent company, Reckitt Benckiser, reported that revenue was up more than 13% in the first quarter of 2020.

“We want to and need to build long-term equity with consumers today,” Jonsson said. “And we believe education, activism and purpose is the way to do that.”

@hiebertpaul paul.hiebert@adweek.com Paul Hiebert is a CPG reporter at Adweek, where he focuses on data-driven stories that help illustrate changes in consumer behavior and sentiment.
@RyanBarwick ryan.barwick@adweek.com Ryan is a brand reporter covering travel, mobility and sports marketing.