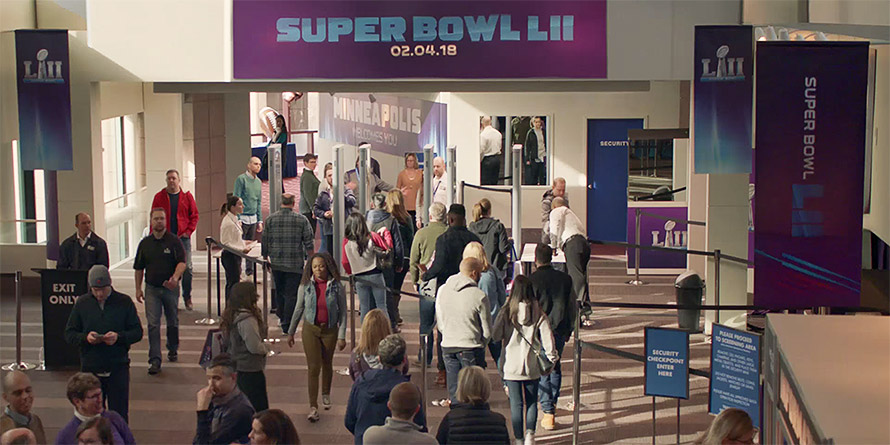 Originally, the plan was to incorporate footage taken from fans entering the stadium, but that proved to be too complicated. - Credit by Hyundai

The ad, which was created by Hyundai and agency Innocean, features footage of visitors to Hyundai’s NFL Super Bowl Experience driven by Genesis setting off a “hope detector” and being taken aside to a private screening of the brand’s Super Bowl ad, followed by a surprise meeting with pediatric cancer survivors. “Hope Detector” promotes the Hyundai Hope On Wheels pediatric cancer nonprofit.

Originally, the plan was for Hyundai and Innocean to also incorporate footage taken from fans entering the stadium Sunday and going through a similar experience. The logistics of clearing such a plan with the NFL and U.S. Bank Stadium security proved difficult, however, so last week Hyundai altered its plans, intending instead to incorporate five to eight seconds of footage shot on game day of fans arriving at the stadium to establish the setting.

“We were able to capture a good set of customers and reactions,” Hyundai Motor America CMO Dean Evans told Adweek. “That’s when we made the decision to say we had enough. We don’t have to push and be risky around trying to fish out a few customers on game day, because we got it accomplished before [that].”

Last Thursday, after deciding it was satisfied with existing footage, Hyundai decided to scrap those plans as well, instead moving ahead to edit its spot ahead of the Big Game.

“It turned out probably better than we’d hoped,” Evans said, which, he added, was part of the reason the brand decided not to incorporate game-day footage, along with a desire to “maximize in our 60 seconds the amount of people time, the amount of reaction time … and the maximum time of the main message.”

“We set the table at the very first scene with putting a little bit of messaging of Super Bowl LII above the hope detectors at the very beginning so we didn’t have to do the same day shoot of people coming and shots of the stadium to set the table, like we thought,” he explained. “That freed up a little more time to draw out the drama and hit the target, which was the two lines at the end.”

The spot concludes with the lines, “Thanks to millions of our owners hope is our greatest feature. And it comes standard on every Hyundai.”

The logistical challenges don’t mean Hyundai has ruled out live game-day footage in future efforts. While last year’s concept hinged on the usage of such footage, Innocean and Hyundai found that “Hope Detector” worked just as well without it.

“If your big idea equals live activities during game day then you go for it, if it doesn’t then you don’t need to deal with what is, in a lot of cases, a lot more logistics and a lot more pressure on a team to produce,” Evans said. “At the end of the day I’d much rather have the best film over operation complexity.”