Their habits aren’t showing any lasting unhealthy side effects 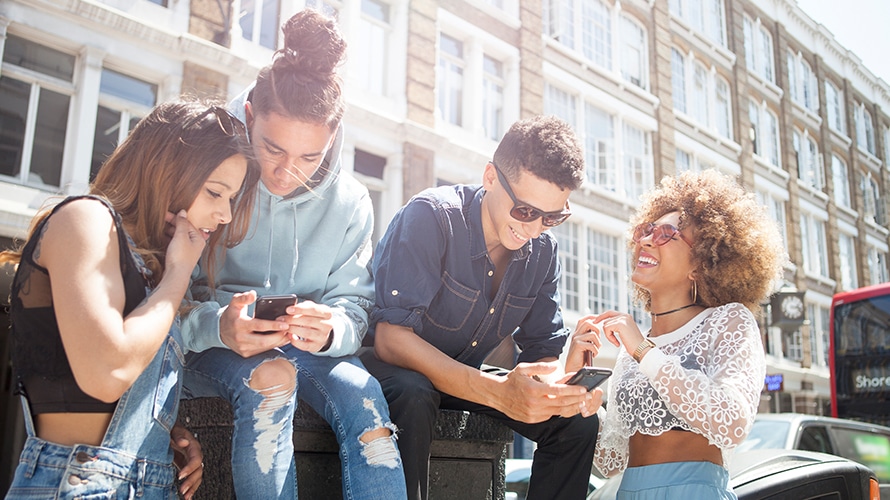 At a time when so much attention is being given to the negative side of teens’ relationships with technology (i.e., tech addiction, isolation from the outside world, moody and impetuous behaviors), our 2018 Gen Z Passion Point™ Study paints a very different picture.

In the 2018 wave, we included a representative sample of “Tech-Heavy” and “Tech-Light” teen girls and guys, which allowed us to observe how these differing behaviors may be impacting their emotional priorities and well-being. While excessive use of technology is certainly having an adverse effect on the emotional health of some teens, to the vast majority of Gen Z (and notably to their parents as well) the net effect of technology is overwhelmingly positive.

It is common knowledge that most of Gen Z now owns a smartphone and uses them with ever-increasing frequency. But despite the ubiquity of both devices (phones, tablets, laptops) and digital destinations (social media sites, SVOD, gaming), only about one in four parents of Gen Z say they have observed unhealthy outcomes, such as rushing through activities to get back to their Instagram pages or moodiness when separated from their phone.

Furthermore, we saw a remarkable alignment between qualities parents and Gen Z view as being prerequisites for their success and what the use of technology provides them. In a world where an overwhelming majority of parents put “life skills” ahead of “academic success” as a predictor of their teens’ success, technology is seen as a powerful way to enhance their child’s resourcefulness, creativity, confidence, safety and sense of personal identity.

Technology is seen as a powerful way to enhance their child’s resourcefulness, creativity, confidence, safety and sense of personal identity.

For those Gen Z teens that did exhibit one or more of these unhealthy behaviors, this study raises the fascinating question on whether it was the excessive use of technology that caused these issues or whether the excessive use of technology was a symptom of pre-existing emotional deficits among these kids. For example, there was a significantly higher connection to family among non-tech dependent teens than tech-dependent and a significantly higher proclivity to daydream or fantasize among tech dependent teens versus non-tech dependent.

But overall, over 90 percent of parents and teens reported that technology is enriching their lives in ways that are a perfect intersection with many of their highest emotional priorities. These include helping teens do well in school, preparing them for a successful future and keeping them better connected with their parents.

None of this is to say that Gen Z is not spending too much time in front of a screen cultivating an unrealistically perfect social media persona, turning to escapist digital refuges when faced with real-world challenges or losing touch with the wonders of the outside world. But at a time when Gen Z’s parents are increasingly hesitant to let their kids go out due to fears for their safety and Gen Z is increasingly finding themselves strapped down with crushing amounts of homework and stress, it’s no wonder they are turning to their phones as an antidote.

How are Gen Z marketers and content providers to respond?

Start by updating your understanding of the astonishing changes that occurred in Gen Z’s emotional landscape post-2016 and look for ways to build some of these new emotional hot-spots into your programs and content. Gen Z guys and girls are not simply looking to be entertained by you, they are looking for digital destinations that understand and reflect the deeper hopes, fears and aspirations that now dominate their emotional landscape. Videos, programs and influencers that embody these will contribute significantly to your emotional relevance.

Understand that there has been a sea change in the kinds of social communities that Gen Z seeks online. Gone are the days when mass promotion of their personal brand and accumulation of the maximum number of followers was the be-all, end-all. In its place, Gen Z is now focused with laser beam precision on developing relationships based on trust with a chosen few. How can you provide a digital ecosystem reflective of this?

Don’t be wary of contributing to tech addiction. But do be wary of inserting yourself in those virtual worlds where you don’t have emotional permission to play. As tempting as it may be to tell your story in the digital venue with the most Gen Z eyeballs and ears, both your brand and these platforms have their own emotional DNA. Finding a match between the two is essential in avoiding the perception of your brand being a marketing tourist versus an authentic and natural part of the digital landscape.

@FamilyRoomllc
George Carey is CEO and founder of The Family Room, a strategic research and brand innovation consultancy.