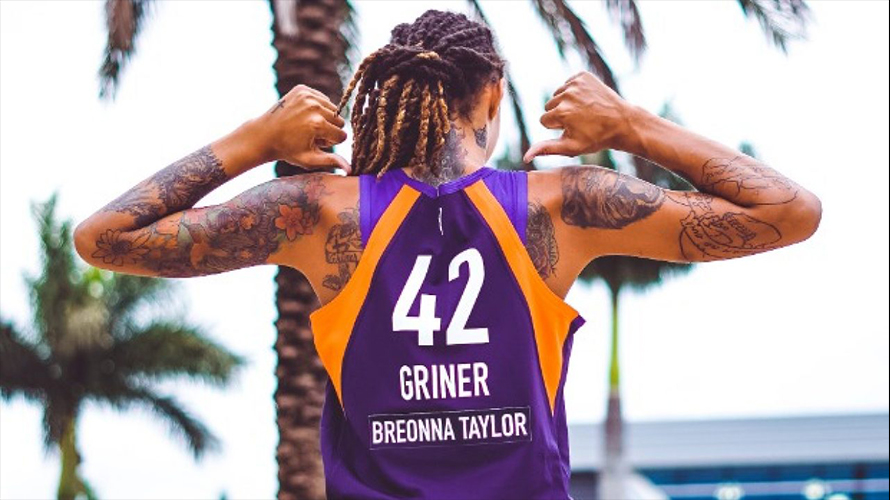 WNBA players dedicated their 2020 season to the #SayHerName campaign. - Credit by Phoenix Mercury

When the 2020 season of the Women’s National Basketball Association (WNBA) tipped off Sunday, players wore jerseys with the name Breonna Taylor—the Louisville, Ky. EMT shot to death by police in her apartment this March—across the bottom. Shirts are also available for sale through the league, with all proceeds going to the Breonna Taylor Foundation.

Before starting the first game of the season, players from the New York Liberty and Seattle Storm held a 26-second moment of silence for Taylor, who was 26 when she was killed. In an impassioned speech, Liberty point guard Layshia Clarendon dedicated the new season to the African American Policy Forum’s #SayHerName campaign that raises awareness of police killings and “Black women who are so often forgotten in this fight for justice, who do not have people marching in the streets for them.”

The @WNBA season tipped off this weekend. We knew if this season was going to happen it was an opportunity to have a huge impact. I cannot tell you the hours spent to get all of this off the ground. pic.twitter.com/8jaC0xMUu4

Twitter/Layshiac
But that’s shifting with the heightened awareness this year of Taylor’s killing, Crenshaw said, who called 2020 “a new moment.” She hopes the conversation around Taylor will lead people to find out more: “You can’t solve a problem you can’t name, and you can’t name something you can’t see.”

The WBNA is the first major corporate brand to partner with #SayHerName, founded in 2014 by AAPF executive director Kimberlé Crenshaw and the Center for Intersectionality and Social Policy Studies.

Brand partnerships like the WNBA’s drive exposure, and that’s one thing Crenshaw says the #SayHerName campaign needs more of.

“WNBA’s footprint is a game-changer,” Crenshaw said. “We’re no longer just talking about tweets and when a handful of anniversaries that come up.”

On Thursday evening, Crenshaw joined WNBA representatives and mothers of Black women killed by police for a Zoom meeting with reporters.

Bethany Donaphin, the WNBA’s head of operations, noted that the league is 80% Black women and that the partnership came out of the players association’s Social Justice Council formed in early July.

Chicago Sky guard Sydney Colson said this year, players feel empowered to participate in social justice efforts like never before. “For us to have switched from 2016, where teams got fined for wearing [Black Lives Matter] T-shirts and police walked out of the game in Minnesota, to allowing us to be the face of the social justice season—it shows the power we have,” Colson said.

YouTube/AfricanAmericanPolicyForum
At the meeting, two mothers spoke about why they joined the #SayHerName campaign after their daughters were killed by police, recounting not just the emotional difficulties but the resulting financial burdens and the lack of fundraising for Black women victims of violence.

At the meeting, two mothers spoke about why they joined the #SayHerName campaign after their daughters were killed by police. Rhanda Dormeus’ 23-year-old daughter Korryn Gaines was killed in Maryland in 2016 by police, who also shot and injured her 5-year-old son. Gina Best’s daughter India Kager, a Navy veteran, was killed in 2015 by a SWAT team that shot 30 rounds into her car while her 4-month-old baby sat in the backseat.

Best began to cry while recounting her daughter’s death and her fight for justice afterwards. “They sent me a bill to dispose of the car that they murdered my daughter in,” Best said. She noted it was painful to watch celebrities donate millions to George Floyd’s family in comparison, while “I have to live off of food stamps.”

In one uplifting moment after a painful discussion, Janelle Monáe surprised the Zoom attendees to announce a project in which artists will say the names of all of the women memorialized on the #SayHerName website, calling it “a song, a chant, a cry uplifting their names and also bringing attention globally to the victims.” 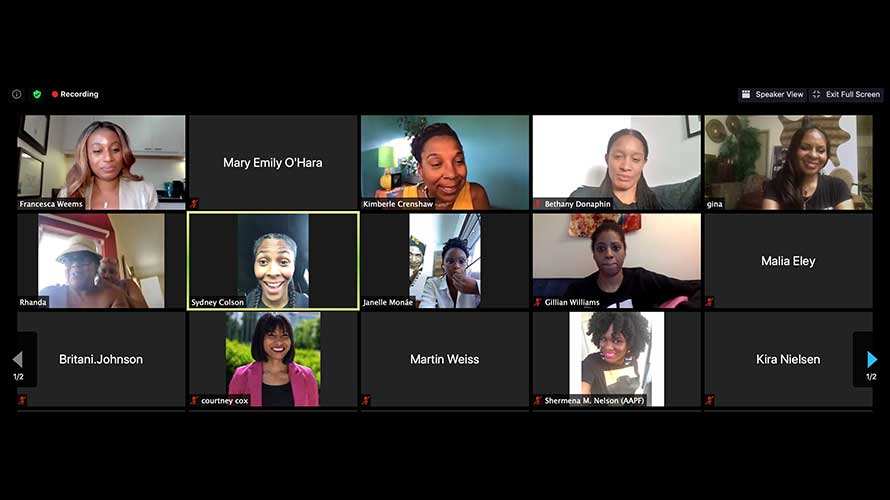 WNBA players and mothers from the #SayHerName campaign were surprised by Janelle Monae's sudden appearance in a Zoom call Thursday evening.
“My goal right now is to make everyone aware of how many cases go unseen and how many families still don’t have justice,” Monáe said. “We’re seeing it with Breonna Taylor just now, but all the names on the [#SayHerName] site—these families are grieving, these cases have not been closed, and these murderers who work for the police department have not been convicted.”

A spokesperson for the African American Policy Forum told Adweek on Friday that more brand partnerships are coming soon, including a special edition of Gucci’s Chime for Change zine coming in late August or early September.